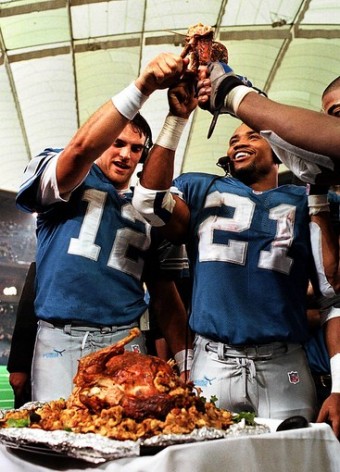 Today I found out how the tradition of the Detroit Lions playing on Thanksgiving got started.

In 1934, radio executive G.A. Richards bought the Portsmouth, Ohio Spartans NFL team, moved them to Detroit, and renamed them the Lions.  Unfortunately for him, nobody in Detroit cared much for watching the Lions.  Despite winning all their games but one before Thanksgiving, having several stars of the day, and one super star in Earl “Dutch” Clark, the average turn out for each game was only around 12,000 people.

At the time, it was fairly traditional for various football programs in high schools and colleges to hold particularly significant games on Thanksgiving.  So Richards decided to try to bring this same tradition to the NFL, convincing the NFL to allow the Lions and the defending World Champion Chicago Bears to play for the Western Division championship on Thanksgiving.

Richards then used his considerable influence in radio to convince NBC that they should broadcast this game on the radio all across the United States, something that had never been done before for an NFL game.  The game ended up being a huge success, being played at the University of Detroit Stadium in front of a sold out crowd of 26,000 fans and broadcast across the nation on over 94 different radio stations.  In the end, the Bears won 19-16, but the game was such a success, as far as ratings and fan turn-out went, that Richards fought to be allowed to continue having the Lions play on Thanksgiving going forward and to continue to have that games broadcast out on the radio nationwide.