This Day in History: November 11th 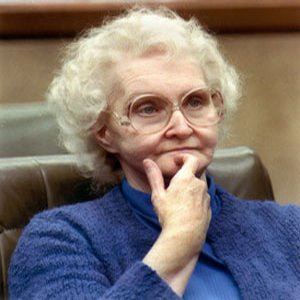 During the early 1980s, ex-nurse’s aide Dorothea Puente ran a boarding house for the elderly in Sacramento, California. She was a schizophrenic who had numerous run-ins with the law. She served time for forging checks, and also was incarcerated for drugging and then robbing random people she had met in bars. She opened her boarding house after her release for these offenses.

A social worker named Peggy Nickerson sent 19 clients to Puente’s boarding house starting in 1986. When Puente couldn’t account for several of their whereabouts, Nickerson naturally became concerned. When some of the neighbors complained about the smell of rotting flesh wafting over from the Puente property, Nickerson alerted the authorities.

On November 11, 1988, police uncovered a corpse buried in the front lawn of Dorothea Puente’s boarding house. After further investigation, seven bodies were eventually found. The coroner was never able to establish an exact cause of death, even though all of the bodies had traces of a sedative called Dalmane.

Puente was found guilty of murdering her boarders after a five-month trial. The fact that she was stealing and cashing their social security checks didn’t help her case. She was charged with a total of nine murders and was convicted of three, but police suspect Puente may have been responsible for as many as 25 deaths. She was sentenced to serve two life sentences.

But that wasn’t the end of this macabre story. In 1998, Puente began a correspondence with Shane Bugbee, who extensively interviewed the convicted murderer over a period of several years. She also began sending him recipes and artwork, and the culinary classic “Cooking with a Serial Killer” was released in 2004. No, really. You can’t make this stuff up.

Even creepier still is that people currently tour the boarding house, now a privately owned home, with the lead homicide detective who worked on the Puente case. During the tour, he points out the area – currently the master bedroom – where Puente would drain her victims’ bodily fluids.

Moving to the dining room, the detective tells the tour group that the current owners have their dining room table situated exactly where Puente’s was when she was drugging her victims before she killed them. That’ll whet your appetite.

And for that last classy touch, a mannequin meant to represent Puente stands at one corner of a patio, sporting a red coat and holding a green shovel, just a few feet away from where one of her victims was unearthed.