This Day in History: November 8th 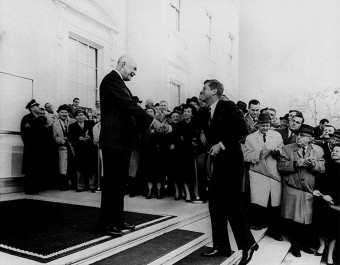 On November 8, 1960, John Fitzgerald Kennedy became the youngest man to be elected as United States President, beating Republican Vice President Richard Nixon by one of the narrowest margins in history.

One of the factors that may have tipped the scales ever so slightly in the election was Kennedy’s shrewd willingness to address his Catholicism head on. As the first Roman Catholic to seek the presidency, Kennedy knew this could work to his disadvantage, as many would-be voters felt his policies would be influenced, and some feared controlled, by the Pope.

Kennedy gave a series of speeches to address any concerns about his religion, and opened himself to questioning pertaining to his stand on church/state issues by Protestant leaders in Houston, Texas. His answers proved satisfactory, and this calmed the fears of voters suspicious of electing a Catholic president.

Being a Roman Catholic isn’t the only thing that set John F. Kennedy apart among U.S. presidents. Here are some other facts that made JFK unique, or at least stand out, among his fellow Commanders-in-Chief, that aren’t as commonly discussed:

Kennedy’s presidency, though fraught with challenges, brought hope to many groups that had felt disenfranchised and forgotten, and sparked an interest in the political process and public service in the younger generation. Who knows what would have happened if his life hadn’t been cut short on that sunny, tragic day in Dallas a mere three years later?