Myth: Whales spray water out of their blowholes. 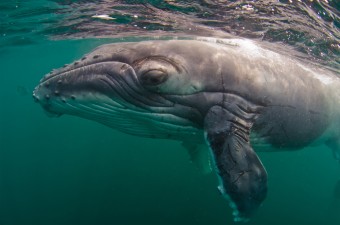 Contrary to what you may have seen in such movies as Pixar’s otherwise extremely entertaining Finding Nemo, whales don’t  spray water out of their blowholes.  Further, the whale’s trachea doesn’t connect to the esophagus of the whale; so when Dory and Marlin went down the whale’s throat, in real life, they’d have simply been eaten.

(Another interesting thing about Finding Nemo is that when the mother died, the father would have turned into a female and become the mother– clownfish are all born male with the dominate male of a group becoming female when the female of the group dies.  Also, Coral, Marlin’s wife, should have been bigger than Marlin, not smaller as depicted in the movie.)

Whales, of course, are mammals that live in the ocean; that’s why they evolved to have a blowhole in the first place. Scientists believe that whales were once land mammals that adapted to live in the sea, likely because the sea held a more bountiful supply of food than the land did during their evolutionary period.

Whatever the case, whales’ “noses”, or blowholes, are on the top of their heads, so that they can just barely break the surface to breathe without rising too far out of the water. When inhaling, they flex a muscle which opens the blowhole and take in a big gulp of air. Then, they relax the muscle to close the blowhole, leaving them free to dive down beneath the surface of the water once more without drowning themselves.

It’s exhaling that’s the interesting part. When the whale resurfaces, they have to release the used up air back into the atmosphere just like all other mammals do. This results in a spout, but it isn’t water (at least not at first). The air inside the whale is typically quite warm from the whale’s body heat. When it’s exhaled, it meets the much cooler temperature of the air outside and immediately condenses, making it look like a spout of water. (This is also often mixed with mucus —it is a nose, after all!)

The great thing for avid whale watchers is that every species of whale has a differently shaped blowhole (some even have two!) which results in differently shaped spouts. Because of this, an experienced whale watcher can tell what species of whale is nearby just by seeing their spouts. For instance, a humpback whale’s spout looks like a column; orcas’ spouts are somewhat more bushy; and gray whales’ two blowholes are positioned in such a way that their exhalation results in something of a heart-shaped spout.

As a rule, baleen whales—those whales who don’t have teeth, but rather have baleen plates to filter food out of the water—have two blowholes, while toothed whales have just one blowhole.  Types of baleen whales include the humpback, blue, and gray whales. (This is, of course, another inaccuracy in Finding Nemo as that was a humpback whale that they showed having only one blowhole.)

Meanwhile, toothed whales include sperm whales and beluga whales, among others. Interestingly, the blowhole of a sperm whale is actually located on its left side rather than right on top of its head. It’s technically a “left nostril.” While they don’t have a right nostril, they do have a right nasal passage that is fully developed; it just lacks an opening. (Well, about 85% of humans breathe out of just one nostril at a time, so it works!)

Luckily for whales, they don’t have to keep coming up for air every few minutes like we’d have to. Sperm whales, for instance, can hold their breath for about an hour and a half.

Part of their ability to stay underwater so long comes down to the size of their lungs which are, as you can imagine, pretty large (to give you an idea, a blue whale’s lung capacity is 5000 litres, or 1320 gallons). However, it also has to do with the way whales are able to process the air that goes in. It’s estimated that whales use about 90% of the oxygen that enters their lungs, making the most of each breath. In comparison, humans are estimated to use only about 15% of the oxygen we breathe.