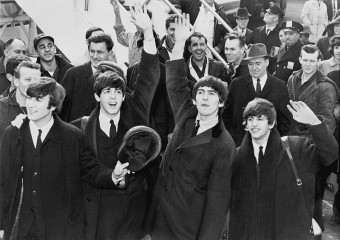 Come on, admit it. If you’re a Beatles fan you’ve looked for all the clues on the album covers and in the song lyrics. It’s one of the rites of passage from being a casual fan to being a true blue blithering Beatlemaniac. If you’re a Beatles fan worth your salt, you can list at least 20 “clues” that “prove” Paul McCartney died sometime in 1966 (“He blew his mind out in a car”) and was replaced by a look-alike named William Campbell. Just a bit of Fab Four fun, but some people took this dead seriously.

The “Paul is Dead” myth first surfaced in the mainstream media in the September 17, 1969 edition of the Times-Delphic, Drake University’s paper in Des Moines, Iowa. The story spread like wild fire, and by the middle of October the story had broken across the Atlantic.

The press had been repeatedly trying to reach members of the Beatles for their reaction to this story to no avail. Paul McCartney was home at his Scottish farm on October 22nd when Peter Brown, close friend and manager of Apple records, called him and requested a statement he could release to the press. Paul accommodated him with a quote borrowed from Mark Twain: “Rumors of my death have been greatly exaggerated.”

Paul’s statement did practically nothing to end the rumors, and the Apple offices continued to be besieged with calls from reporters insisting to know the “truth.” Detroit’s WKNR DJ, John Small, managed to speak to John Lennon, who stated, “What did we do, stuff him and shave him? How could we do it? I don’t understand what it’s all about.”

Alex Bennett, a reporter from New York’s WMCA came to London on October 22nd. The next day, he interviewed Ringo Starr, Derek Taylor (friend and Apple press officer), Neil Aspinall (friend), and others who would see McCartney on a regular basis. In closing, Starr told Bennett: “If people are gonna believe it, they’re gonna believe it. I can only say it’s not true.”

McCartney agreed to be interviewed by the BBC’s Chris Drake on October 24th at his High Park Farm in Campbelltown, Scotland. McCartney put forth that all the stories had begun because he’d been keeping a much lower public profile since marrying and becoming a father. He explained that since he and his wife Linda had started a family, he preferred a quieter, more private life.

“If the conclusion you reach is that I’m dead, then you’re wrong, because I’m alive and living in Scotland.” McCartney said. He also added that the Beatles had no projects lined up for the near future, and that he might not return to London until sometime in 1970.

So, Paul certainly wasn’t dead, but by late 1969, the Beatles as a musical entity almost were; they finally made it official in 1970. And, for those in the know – cranberry sauce.