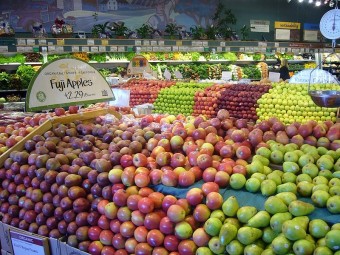 The seeds of apples, also known as “pips”, contain a sugar/cyanide compound called “amygdalin”, which turns into hydrogen cyanide when it is metabolized in your body. Hydrogen cyanide was one of the key ingredients to Zyklon B, the trade name of the pesticide used by the Nazis in their gas chambers.

Other fruit seeds that also have cyanogenic glycosides are cherries, peaches, certain almonds, plums, apricots, raspberries, and pears. (“Cyanogenic glycosides” are just molecules in which sugar is bound to a smaller non-carbohydrate molecule, in this case cyanide.)  Tapioca, also known as cassava root, is another plant that contains a cyanide precursor, namely linamarin.  If the roots aren’t processed correctly (drying, soaking, and baking them for a certain amount of time), they are extremely poisonous.

It takes only about 100-200 mg of cyanide, when eaten, or about 270 parts per million, when breathed in, to be fatal to an adult within a few minutes (about .68 mg per pound of body weight); obviously much less cyanide is needed to be fatal to children or pets.  Before you go panicking after accidentally swallowing an apple seed, you should know that ingesting a few seeds won’t kill you.  The human body is perfectly capable of handling very small doses of cyanide.  This is lucky for tobacco smokers; when a person smokes a cigarette, they’re breathing in low doses of hydrogen cyanide, which is then processed by the liver so that it can’t accumulate to sufficient amounts to cause major problems.

Another reason swallowing apple seeds isn’t that dangerous is that, if you just swallowed the seed without chewing it, it is likely to pass through your digestive system completely intact and undigested.  However, if for some odd reason you get a hankering to chew a bunch of apple seeds, or if your toddler decides apple seeds are the tastiest thing since ice cream, you should probably get yourself or your child to an emergency room stat.  If you can’t get to the hospital extremely quickly, it’s best to induce vomiting immediately.  Emptying your stomach of the cyanide is generally the first thing they’ll do at the hospital anyways, though usually via a stomach pump.

In either case, you have to be quick to take action because cyanide kills extremely fast.  It works by stopping your body from being able to use oxygen.  More specifically, cyanide binds to an enzyme inside the powerhouse of your cells (mitochondria) and stops them from being able to use oxygen to create energy. Thus, shortly after ingesting a sufficient dose of it, you’ll die of asphyxiation.

Treatment for cyanide poisoning beyond using a stomach pump or inducing vomiting  was once very limited, but today there are some effective antidotes available, though getting them administered in time is sometimes a bit of an issue.  One of the more effective antidotes for cyanide poisoning has only become available since 2006.  This goes under the brand name Cyanokit which contains hydroxocobalamin.  Hydroxocobalamin reacts with the cyanide to form cyanocabalamin, which your kidneys are able to get rid of.