This Day in History: September 13th

This Day In History: September 13 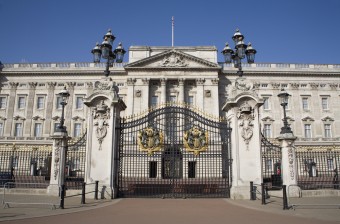 On this day in history, 1940, the Luftwaffe bombed Buckingham Palace.

In World War II during the London Blitz, the Nazi German Air Force made an air strike on Buckingham Palace while King George VI and his consort Queen Elizabeth were both in residence. During the attack, the palace was hit by five explosives, including two that struck the inner quadrangle, and another that hit the Royal Chapel. Their Majesties remained unharmed, and insistent that they would remain in London for the duration, as they had planned from the beginning.

During this time of national crisis, the King and Queen became icons of hope to their war ravaged nation, evolving into symbols of sacrifice, bravery and resilience just by their example. When the onslaught of the Blitz first began, many palace officials strongly encouraged the King and Queen to evacuate the Royal Family, or at least their daughters, to a place of safety. Queen Elizabeth considered this idea unthinkable and famously stated,

The Queen finally did relent and allowed Princess Elizabeth and Princess Margaret to be moved to the relative safety of Windsor Castle. The King and Queen resolutely remained at Buckingham Palace, frequently making visits to the hardest hit areas of the country to offer comfort and support. After the attack on Buckingham Palace, Queen Elizabeth was heard to remark that she could “now look the east end in the face.”

There were several more attacks on the Palace following the one on September 13, 1940, but time and time again the Queen refused to be intimidated, which was a huge morale boost for a war-weary Britain, and won her even more love and affection from the people of Britain.

It’s not hard to understand why Hitler considered her the most dangerous woman in Europe. Aside from the obvious adoration of her people, she may never have received a higher compliment.