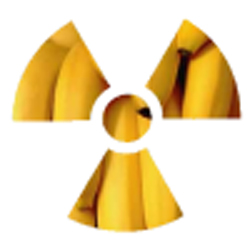 The fact that bananas are radioactive has actually given rise to the radiation unit: “banana equivalent dose” (BED); this is the average amount of radiation you are exposed to by eating one banana.  The banana equivalent dose is occasionally used to help conceptualize the relative danger of various radiation sources and amounts; for instance, the amount of radiation typically leaked by a modern nuclear fission reactor.  This leaked radiation is typically extremely small, typically in the realm of a picocurie, which is a millionth of a millionth of a curie.  This latter measurement doesn’t make a whole lot of sense to most people, thus the banana equivalent dose was introduced to give an easy way to understand whether X amount of radiation is harmful or not, given that you know bananas aren’t harmful.  For instance, living within 10 miles of a typical nuclear power plant will expose you on a daily basis to just a bit more radiation than you’d get from eating one banana a day.

Now before you start boycotting bananas because of the above association with nuclear reactor radiation leakage, consider that, to cause illness in a person, it takes about 100 rems. (Roentgen Equivalent Man: 1 rem = the quantity of ionizing radiation whose biological effect is equal to that produced by one roentgen of x-rays; basically, a measurement of how much radiation a person is exposed to.)  So given eating one banana a day for a year only exposes you to 3.6 millirems, you’d need to eat about 10,000,000 bananas in order to reach that amount [100 rems * (1000 millirems / rem) * (365 bananas / 3.6 millirems)].

Not only should you not worry about eating bananas because of the radiation, but barring some major reactor meltdown, you shouldn’t really worry about living near a nuclear reactor either.  In fact, recent research has even begun to indicate that these extreme low level amounts of radiation you experience from the cosmos, bananas, and the like, may actually be beneficial to your body.  And as far as major reactor problems that might come up go, if you camped out at the plant at Three Mile Island during the accident that happened there in 1979, you’d have received only an additional 80 millirems of exposure during the duration of the accident.  Granted, you’d need to eat about 8000 bananas to reach that level from bananas, but if you’ve ever had your spine x-rayed, you’d have received about double that just during the few seconds of the x-ray.  If you were around ten miles away from the reactor during the accident, you’d have received about 8 millirems or about the equivalent of 800 bananas.  There are no known deaths/cancers/etc that resulted from this event.

Public reaction to Three Mile Island was way overboard from what the actual event warranted as you can see from the banana equivalent dose.  This was largely due to misinformation in the press; misunderstanding of radiation among the general public; and the fact that, not 12 days before it happened, the movie The China Syndrome was released.  The plot of the movie was basically how unsafe nuclear reactors were and that just about everyone in the movie but one of the main characters was trying to cover it up.  The China Syndrome movie title’s concept comes from the premise that if an American nuclear reactor core were to melt down, it would melt through the center of the Earth to China.  Getting around the fact that it is actually the Indian Ocean that is on the opposite side of the Earth from the U.S. and the obvious problems with the “melt through the Earth” premise, it couldn’t have been a better timed movie as far as free advertisement through the press due to the Three Mile Island incident. The movie was nominated for several academy awards, including best actress by Jane Fonda.

So in essence, the banana equivalent dose is basically a  measurement used  to help quell the media hysteria that always surrounds nuclear reactors and other potential radiation sources like cell phones and the like.  Basically, trying to show people that radiation is everywhere (literally) and most of it isn’t harmful at the levels we are typically exposed to, despite what you might read in the news.

On that note, for your reference: