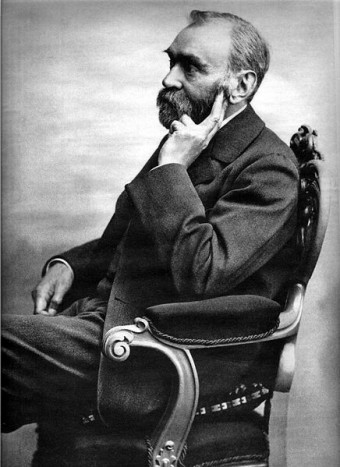 Myth: The reason there is no Nobel Price for Mathematics is because Alfred Nobel’s fiancée wife had an affair with a mathematician.

While that’s a nice anecdote to tell a classroom of sleepy Limits and Infinite Series students, like so many other such historical anecdotes, it simply isn’t true. Nobel himself never married, though he did propose to one woman, Alexandra, who turned him down. He later had a relationship with his secretary Bertha Kinsky, which eventually ended with her leaving him to marry her former lover, Baron Arthur Gundaccar von Suttner. In this case, Nobel and Kinsky remained very close friends for the rest of his life. The third “love of his life” was Sophie Hess, whom he maintained a relationship with for around 18 years; he also referred to her as “Madame Sofie Nobel” in letters, even though they were never married.

Aside from these women, there is no record of him having any significant love affair with any other woman than those listed above. The first one who rejected him did so early on in his life and there was no record that she then ended up marrying or having a relationship with any mathematician, so it is unlikely that any long standing grudge developed from this. He remained friends with the second woman throughout his life, so likely no animosity there. For the third woman who he had an 18 year relationship with, numerous letters between she and himself are still around and they don’t mention or allude to any affairs.

It is also sometimes suggested as “proof” that something to the effect of the above anecdote took place because in his last revision to his will, Nobel got rid of a 5% bequeathal of his estate to what is now the University of Stockholm; the rumor is that he did so because of a feud with the a fore mentioned Mittag-Leffler, who he at least knew of from the “Stockholm educated society”. However, there is no record of such a feud and it isn’t clear if the two actually ever even met, given Mittag-Leffler was a student when Nobel left Sweden and Nobel only returned about once a year for his mother’s birthday.

It should also be noted that Nobel frequently revised his will throughout his lifetime and, on that same above revision where he got rid of the 5% to the present day University of Stockholm, he also got rid of most of his educational donations to other schools, not just the above where Mittag-Leffler taught. He was simply shifting his focus to giving more of his estate to the Nobel Prizes, rather than to educational institutions.

The more mundane reasoning behind him not selecting mathematics for a Nobel prize is thought to be simply that Nobel wasn’t very interested in the subject and didn’t grasp the practical benefits to the world of advanced mathematics. The Nobel Prizes were created as awards for people who made the greatest contributions to mankind in subjects that interested Nobel. So it would seem Nobel just didn’t see the benefit in providing one for mathematics, a subject he didn’t care for anyways, and, rather, he stuck to ones he understood well the benefits to mankind and subjects he was more interested in: Physics, Chemistry, Medicine, Literature, and Peace.

Nobel did a lot of his own work in Physics and Chemistry and was an enthusiast of various literature of the day. He also saw the benefit to advancements in medicine. The “peace” prize was thought to have been suggested and promoted by his former lover and secretary Bertha Kinsky, who later won the award in 1905, just a few years after the Nobel Prizes were established. The peace prize would have also appealed to him, as he had a reputation as a war monger, and a huge point to the Nobel Prizes was to fix his reputation as a “merchant of death”.

The above is the generally accepted theory based on historical records, however, an alternative theory is sometimes suggested, though it is pure speculation. At the time, there already existed a major mathematical award that was actually established at the behest of Mittag-Leffler himself. Mittag-Leffler persuaded King Oscar II to create an endowment prize for various mathematicians throughout Europe. Thus, Nobel may have simply not wanted to try and compete with that established award with his own. Rather, he focused his funds on fields that interested him that didn’t already have prestigious awards attached.

Nobel ended up donating a full 94% of his fortune (about $235 million out of $250 million, adjusted for inflation) to be used for the Nobel prizes. He came up with the idea of using his money this way after his brother, Ludvig, died in 1888 and a French newspaper mistakenly thought it had been Alfred Nobel himself who died and published: “The merchant of death is dead”. Thus, Nobel began thinking of how to improve his public image and decided on the Nobel Prizes.

The “merchant of death” title was given due to Alfred Nobel inventing dynamite and other types of explosives which in turn lead to other potent weapons. The French newspaper obituary stated: “Dr. Alfred Nobel, who became rich by finding ways to kill more people faster than ever before, died yesterday.”