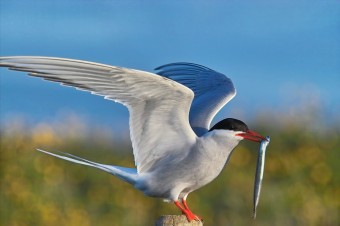 Thanks to recent technological advancements, specifically tiny 1.4 gram geolocators, scientists are now better able to determine exactly where these birds migrate and how long they travel for. Before these devices, it was estimated that the Arctic Tern only traveled roughly half of the distance they really do, but now we know that of the tagged birds, the shortest migration was an astounding 36,900 miles (60,000 km) while the longest was 50,700 miles (81,000 km). For perspective, the circumference of the Earth is 24,901 miles (40,075 km).

This migration is completed annually at every life stage.  Given that the Arctic Tern can live as many as 35 years, a single Arctic tern can potentially travel about 1.5 million miles (2.4 million km) in their lifetime. That is equal to 3 trips to the Moon and back!

During its migration, the Arctic Tern completes a roundtrip from Greenland, traversing the Weddell Sea and even flying along the shores of Antarctica. The birds take a break at sea over the North Atlantic Ocean while they fuel up on food (being a seabird, they eat mainly fish and marine invertebrates).

Once this break is completed, the birds head down the coast of northwest Africa, around the Cape Verde Islands, then off the west coast of Africa towards Senegal.

At this point in their travels, something very odd occurs.  Rather than following the same path, only around half of the migrating birds will continue the path along the coast of Africa. The remaining birds actually cross the Atlantic Ocean and go down the coast of South America. The reason behind this isn’t fully understood; but whatever the case, both sets of birds complete their trips successfully.

The return trip also has an interesting twist. Rather than traveling straight back along the path they came, the Terns instead travel in a twisted ‘S’ shaped pattern through the Atlantic Ocean. Though this route adds many miles to their trip, it has a purpose. The birds are taking advantage of the global wind system. So although they’re taking a meandering path, they actually use less energy thanks to the wind currents.

If you liked this article and the Bonus Facts below: