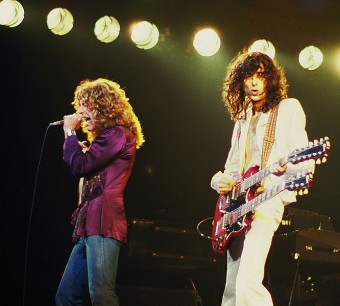 It was voted in 2000 by VH1 as the #3 song on its list of “Greatest Rock Songs” and landed the #31 spot on Rolling Stone magazine’s “Greatest Songs of All-Time” list.   Written by Robert Plant (lyrics) and guitarist Jimmy Page (melody) Stairway to Heaven is not only Led Zeppelin’s signature song, it may well be the most beloved rock song of all-time. If not, it is generally on almost every rock critic’s, expert’s, and fan’s list of greatest and/or favorite songs.

Stairway to Heaven was the most requested song on FM radio in the 1970s.  Given that, surprisingly, the song was never released as a single.  (Radio stations did, however, receive promotional singles of it, which have now become collector’s items.)

Recorded from December 1970 to March of 1971, the album and song were released on November 8, 1971 on the untitled fourth Led Zeppelin album (usually referred to as “Led Zeppelin IV”).

One of the most discussed and dissected facets of Stairway to Heaven is its actual meaning.  Robert Plant has touched on the subject on more than one occasion. According to Plant:

My hand was writing out the words “There’s a lady is sure (sic) all that glitters is gold and she’s buying a stairway to heaven.” I just sat there and looked at them and almost leapt out of my head… It was some cynical aside about a woman getting everything she wanted all the time without giving any thought or consideration. That first line begins with that cynical sweep of the hand… and it softened up after that.”

Fair enough, but in a later interview, Plant is less nebulous and fairly clear that Stairway to Heaven has no actual meaning. Plant: “Depending on what day it is, I still interpret the song a different way- and I wrote it.”

As to the song’s haunting music and beautiful guitar solos, Jimmy Page elaborates, “I had these pieces, these guitar pieces, that I wanted to put together.” Page always carried a tape recorder around with him and says he composed the song “over a long period”.

Led Zeppelin first played the song in public on March 5, 1971, at Belfast’s Ulster Hall. At the song’s original public rendition, the reception wasn’t very encouraging. Led Zeppelin’ bass player John Paul Jones recalls the fans at this concert “were all bored to tears waiting to hear something they knew”. It has even been reported that the song was actually booed by a few fans at this first public performance of it.

This obviously changed and, over time, the song caught on.  By 1975, because of public demand for Stairway to Heaven, the band almost always saved it as a concert-ender. However, because of boredom and monotony by lead singer Plant, he would often indulge himself and change the lyrics, singing such nonsense verses as: “Does anybody remember laughter?” / “Does anybody remember forests?” / “Wait a minute.” / “I hope so.”

I’d break out into hives if I had to sing Stairway to Heaven in every show. I wrote the lyrics and found the song to be of some importance and consequence in 1971. But 17 years later, I don’t know. It’s just not for me. I sang it at the Atlantic Records show because I’m an old softie and it was my way of saying thank you to Atlantic because I’ve been with them for 20 years, but no more of Stairway to Heaven for me.

Plant even once went so far as to make a monetary pledge to a public radio station if they promised they would never play Stairway to Heaven again.  His annoyance was no doubt buoyed by the fact that by 1991, on the 20th anniversary of the release of the song, it was announced that radio stations had played Stairway to Heaven an estimated 2,874,000 times. If this playing time was back-to-back, it would amount to about 44 years.

Although Plant was obviously very tired of his most beloved accomplishment, guitarist Jimmy Page seems to have less of an “I’m sick of it” attitude and viewpoint.  Page says:

I knew it was good, but I didn’t know it was going to be almost like an anthem. The wonderful thing about Stairway to Heaven is the fact that everyone has their own individual interpretation to it, and actually what it means to them at their point if life.

Sometimes this meaning can be powerful- Plant cited the most unusual performance of his signature song when it was performed live “with two drummers while Duran Duran cried at the side of the stage- there was something quite surreal about that”.

To be fair to Plant, I guess it could get annoying to hear ceaseless talk and adoration of one of your own songs, particularly as he is undeniably one of the greatest singers and composers in rock music history and had a slew of amazing songs that are much less talked about. Kind of like Tina Louise hating her “Ginger” role on “Gilligan’s Island” or Fred Gwynne refusing to talk about playing “Herman Munster” or Elvis looking down on his early days as a hip-swiveling rebel belting out “Hound Dog”.  I imagine if Leonardo Da Vinci was alive today, he would be sick and tired of everyone’s incessant chatter about the Mona Lisa.

The artists themselves have a perfect right to their own opinions and views regarding their own works-  but so do we, their fans. And Stairway to Heaven never fails to send a chill up my spine whenever I hear those incredibly haunting first guitar notes of Jimmy Page come on over the radio or when I listen to Robert Plant’s unbelievably brilliant voice speaking out the song’s vague but unforgettable lyrics.  The greatest rock song ever?  Many would argue with me, but for my dime, yes it is.