Why Do Bananas Go Bad Faster in the Refrigerator?

August 21, 2012 Daven Hiskey
Byron T. asks: Why do bananas go bad faster in the refrigerator than at room temperature? 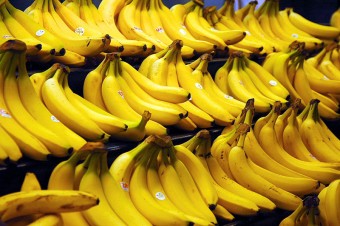 If by “go bad” you mean that the banana peel gets incredibly grotesque looking, then this is true.  However, if you mean that the inside gets all mushy and tastes awful, a-la extreme over ripeness, or the old wives’ tale that bananas in the refrigerator will produce poison gas or other toxins, neither of these are correct.  Despite the fact that the banana peel will turn dark brown, making it appear “bad”, the part you eat inside actually stays quite good in the refrigerator.

In fact, such banana selling companies as Chiquita and Dole recommend you do this to make the banana last longer in its perfect ripeness stage. Once a banana reaches its optimal ripeness for your tastes, but not before, stick it in the refrigerator to drastically slow the conversion of starch into sugars, almost to the point of stopping the ripening process.

The peel will quickly begin to look like the banana’s rotted, due to the polyphenyl oxidase enzyme in bananas polymerizing phenols in the peel into polyphenols.  But other than the somewhat unappetizing blackened peel that results from this, it won’t negatively affect the banana in the short term. Remove the blackened peel and throw it away and you’ll see that the flesh inside is as delicious as ever.

Bananas can typically be kept this way in the refrigerator for about a week. This is obviously significantly longer than an optimally ripe banana will last at room temperature, which always seems to me to be approximately 6 seconds. If you don’t like cold bananas, simply let the blackened looking refrigerated banana sit at room temperature for 30 minutes to an hour or so and then remove the peel and eat it.

Another banana ripening/timing tip is rather than buying bananas all from the same hand, which usually means all the fingers will be about the same ripeness, pick bananas from different hands of varying ripeness, some that are ready to eat now down to ones that won’t be ready for at least a few days or more.  Now keep the bananas stored separately.  This way you won’t have the annoying problem of having a hand of bananas that all ripen on the same day, resulting in you inevitably having to throw some of them out.