How the Momentous “Rock Around the Clock” Song Nearly Never Was 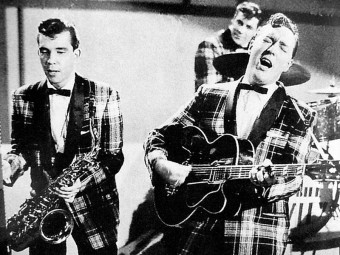 Contrary to popular belief, “Rock Around the Clock” was not the first Rock ‘n’ Roll record to be recorded.  In fact, it wasn’t even Bill Haley’s first Rock record.  “Rock Around the Clock” was, however, the first-ever Rock ‘n’ Roll song to hit the #1 spot on the pop charts.  It transformed rock from a novelty and a curiosity to a dominant force in popular music, paving the way for the brilliance of Chuck Berry, Little Richard, Buddy Holly, Elvis Presley, and countless others.  If it wasn’t for the musical tastes of one teenage boy, the song that made Rock music cool and mainstream might have disappeared into obscurity.

When Bill Haley recorded “Rock Around the Clock”, his producer insisted on slapping the song on the B-side of the record.  For anyone who doesn’t know, the B-side of almost any record is the lesser important side.  It is traditionally reserved for experimental songs, half-hearted instrumentals and throwaways.  In other words, the B-side is usually “filler”.

Selected for the A-side was a song called “Thirteen Women (And Only One Man in Town)”.  Know it?  Of course not- almost no one does.  Having spent most of their studio time on the A-side, Bill Haley and his session band had only 40 minutes to arrange “Rock Around the Clock” (hardly rocking around the clock then while recording it).

Session guitarist Danny Cedrone just used a guitar solo he’d already used on previous records for the song.  The band ground out the soon-to-be-legendary song in just two takes.  (As a great additional piece of trivia, I have to add one irrelevant, but fascinating, true factoid. As Bill Haley and his band recorded “Rock Around the Clock”, a young black singer waited outside for his turn at the mic, to do some recording of his own. Who was the next singer to record after “Rock Around the Clock” was cut? Sammy Davis Jr.)

“Thirteen Women (And Only One Man in Town)” was released and barely touched the lower reaches of the charts before quickly disappearing from American pop-culture history.  And that’s where our story would have ended, if it wasn’t for a teenage boy named Peter Ford.

Peter’s father was the popular actor Glenn Ford.  Glenn was about to star in a gritty film called “Blackboard Jungle”.  It was the story of a teacher (Ford) trying to cope with a classroom filled with tough juvenile delinquents, led by the great Sidney Poitier.  (By the way, was this the first-ever film to depict a strong, rebellious black character? This is an honest question, not rhetorical. For most all of movie history up until the mid to late 1960s, with very rare exceptions, all African-American roles were either foolish clowns, subservient maids, unbelievably great tap dancers, or simply mild-mannered and cooperative, but always non-threatening, men and women. While Poitier’s delinquent punk character is unsympathetic and unlikable, he may have been playing a breakthrough character in film history. However, I may be missing an earlier more obscure role, so take that “fact” with a grain of salt and if you know of a previous such role, leave it in the comments below.)

(Oh, one last thing. In another classic example of Hollywood’s “Age Cheating”, Sidney Poitier, the angry delinquent high school kid, was actually 28 when he appeared in the film.)

OK, let’s get back to our story.  Ford and the producers decided that they needed some music in the film that represented what the kids were listening to.  Hmmm…  Glenn Ford had a teenage son. So, they decided to raid Peter Ford’s record collection where they found “Rock Around the Clock”.  It fit the bill perfectly, so they set the opening and closing credits to the song.

“Blackboard Jungle” was released on March 25, 1955.  The movie and the song both proved to be smash hits.  Kids flocked to the theater, but for an unprecedented reason: they often came not to watch the film, but to hear its theme song play in the credits.

In England, there were small teenage riots where “Blackboard Jungle” played, as young “Teddy Boys” (English for tough gang members) would often rip out seats from the theater.   “Rock Around the Clock” and Rock ‘n’ Roll indelibly became associated with the young and rebellious.

After it was hastily reissued as an A-side after its success in the movie, “Rock Around the Clock” shot to #1 on the charts.  It stayed there for eight weeks.  It would go on to sell 25 million copies, making it one of the bestselling records of all time, in any genre of music.  It makes you wonder how many other would-have-been hit songs are out there that never saw the light of day.