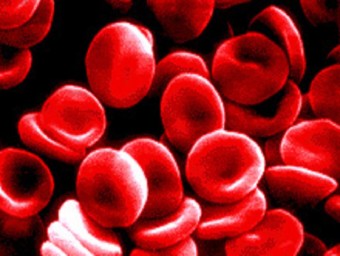 The common misconception that blood that lacks oxygen turns blue probably comes from the fact that veins appear blue and blood in the veins is typically heading back to the lungs, hence depleted of oxygen. It is also possibly from the fact that when people are suffocating or the like, their lips and complexion seem to turn blue-ish or purple.

People who perpetuate this myth often claim that the reason we never see blood in its blue form is that the instant we get cut, the blood is exposed to oxygen and thus, instantly turns red. Of course, when you get blood drawn from your veins that isn’t exposed to air, we see that it is dark red, but let’s not let such observations get in the way of a good myth. 🙂

In reality of course, it turns out that when blood is deprived of oxygen, it actually just turns dark red, as we often see when it is drawn when we are donating blood. When it’s oxygenated, it turns a brighter red. This red color primarily comes from the hemoglobin, which contains four heme groups. These heme group’s interactions with various molecules end up giving it the dark red or light red color we see. The hemoglobin itself is a protein that binds with oxygen to eventually be distributed throughout the body in blood.