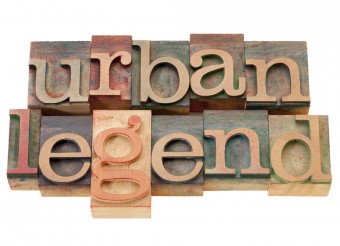 1) The Dissolving Tooth:  There are numerous urban legends involving Coca Cola. In fact, there are so many that these legends all now have their own category known as “Colklore”. The most popular is that if you were to leave a tooth in a cup of Coke overnight, by morning the tooth would be completely dissolved. Like most of the other legends involving the popular drink this is totally untrue.

2) Walt Disney is Cryogenically Frozen:  This is another one of those popular stories that most of us have probably heard. It says that Disney supposedly had his dead body frozen in hopes that future technology could bring him back to life. Unfortunately for all the gossip magazines though, records show that Disney was cremated in 1966.

3) Sewer Gaters:  This story tells the tale of how several alligators were brought up from Florida to be kept as pets in New York City. After they got too big and violent they escaped into the sewers where they now live freely. Dating back to the 1930s and spread by sensationalist newspapers the story is completely untrue yet continues to be circulated to this day.

4) Mr. Rogers was a Navy SEAL: According to this legend Mr. Rogers, the popular children’s show host was once a Navy SEAL sniper in Vietnam responsible for numerous deaths. It goes on to say that the reason he always wears a sweater, to cover up all of his tattoos. As you may have guessed, Mr. Rogers was never a Navy SEAL and he had no tattoos. In fact, he was never even in the military, was a pacifist, and an ordained Presbyterian minister.

5) The Kidney Heist:  Immortalized on TV and the internet, this legend dates back to 1997 when an email was circulated warning people of a crazy new crime wave catching on in big cities. It usually involves a traveling business man being bought drinks by a stranger only to wake up in a tub covered in ice with a phone next to him telling him to call 911. Covered in blood, he later learns that his kidney has been removed by criminals who intend to sell it on the black market. Although the story almost sounds feasible with all the craziness you see on the nightly news, even after the National Kidney Foundation asked victims to contact them, no one has come forward nor is there any documented instance of this occurring.

6) The Jedi Religion Form:  This far reaching hoax claims that if enough people fill out “Jedi” as their religion on their census forms, the U.S. government will have to make it an official religion. At one point thousands of people tried to do just that but to no avail. Just because a large number of people check something on a census form is not grounds for introducing it as “official” anything. 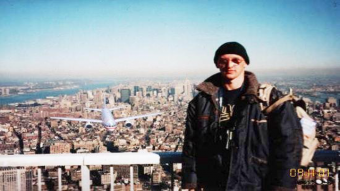 7) The 9/11 Tourist Guy:  Shortly after 9/11, a photo began to circulate showing a tourist standing atop one of the World Trade Centers with one of the airplanes in the background of the shot about to strike the tower. The accompanying story explained how the camera was found in the wreckage but the tourist remained missing. Aside from all of the very inconsistent details in the picture, the story already seemed completely improbable and several people came forward claiming to be the prankster responsible. It wasn’t until recently, however, that the real culprit was discovered in Hungary. He has since apologized to the families for making light of their situation.

8) Poisonous Daddy Long Legs:  There has been a persistent rumor circulating for some time that the daddy long legs spider is the most poisonous in the world but cannot kill humans because its fangs are too small. Where this rumor started no one knows but one thing is for sure, the daddy long legs is certainly not the most poisonous spider in the world. If you’re going to be careful around spiders we would advise keeping your eyes open for the brown recluse or the funnel web spider.

9) USA, Japan:  Yes, there is a town in Japan called Usa. No, the Japanese did not rename it after World War II so that they could legitimately stamp their exports with the phrase “Made in USA”.  The town itself was named after the Usa Shrine, built in 725.

10) Kennedy and the Jelly Doughnut:  The legend goes that Kennedy made a trip to Germany back in the 60′s in an attempt to connect with the German people. While giving a speech in the capital he told the crowd, “Ich bin ein Berliner” or “I am a Berliner”.  Apparently though, a “Berliner” is also a type of German pastry. Since then numerous stories have circulated claiming that he was practically laughed off stage afterwards. The truth is, however, that that the crowd understood him perfectly and nary a single eyebrow was raised at the statement.  You can read more on why he said this statement completely correctly here: John F. Kennedy’s Statement “Ich Bin Ein Berliner” was Not Interpreted as “I am a Jelly-Filled Doughnut”

11) The Good Samaritan:  Circulating for years this legend tells the story of a motorist who stops on the side of the road to help someone fix their flat tire. The person being helped then asks the motorist for his address to send a reward. Several weeks later the motorist receives $10,000 in the mail. Over the years this story has been attributed to several celebrities, most recently Donald Trump.