“Daddy Long Legs” Are Not the Most Poisonous Spider 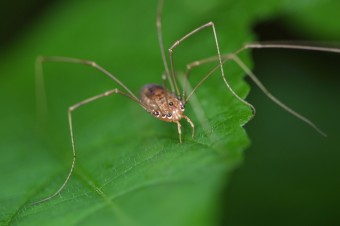 Myth: Daddy Long Legs are the most poisonous spider in the world.

Daddy Long Legs are not the most poisonous spider as you’ll often hear people say. We’ll just ignore the fact that there’s a big difference between “poisonous” and “venomous”, which makes the previous sentence even more ridiculous and assume people mean “venomous” when they make that statement. We’ll also ignore the fact that one of the two arachnids commonly called “Daddy Long Legs” isn’t even a spider.

“Daddy Long Legs” is the name of two distinct kinds of creatures, an arachnid and spider of the family Pholcidae and an arachnid in the family Phalangiidae, namely Opiliones (which is the one that’s not a spider). The former of which does have venom, but there is no scientific basis of the idea that it is particularly harmful to humans, and the latter of which has no venom glands or other way to chemically subdue potential food sources or things that threaten it.

In the case of the pholcid spiders, which do have venom, they have very similar fang structure and size to brown-recluse spiders, who are perfectly capable of having their fangs penetrate deep enough to do serious damage to humans. However, before 2004, there were no known records of bites from the pholcid spiders to humans. This may be because, when they do bite, nothing particularly bad happens. Or, it may be because they simply aren’t very aggressive or because their muscles used with their fangs aren’t as strong as the very similarly fanged brown-recluse spider. In any event, the myth that their fangs are too small to penetrate sufficiently to deliver venom, simply isn’t true and to date, there is no scientific basis for the notion that their venom is particularly harmful to humans.

Case in point, in 2004, the show Myth Busters had one of their people attempt to get bit by one of these spiders and supposedly they were successful. Rather than die from the bite, the person bitten reported simply feeling a very brief and mild burning sensation which disappeared quickly. Further, research done by Alan Van Dyke has shown that the pholcid venom doesn’t even negatively affect insects all that much either, so is considered to be very mild.

So the two myths surrounding that one, that they can’t bite humans due to mouth/fang size and that their venom is particularly harmful, simply aren’t true.

For the other variety of “daddy long legs”, opilionids, they actually have no venom, as stated before, nor a method to deliver that venom, like fangs, even if they possessed the venom in the first place. They live off decomposing vegetation and animal matter, primarily. They also aren’t actually spiders, which would of course make the statement “most poisonous spider” even more nonsensical.