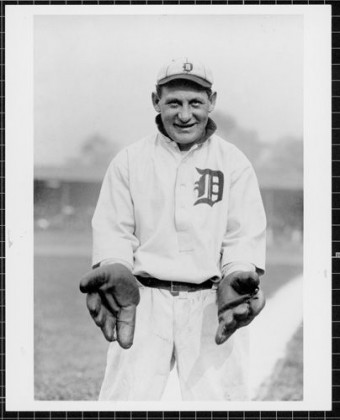 Today I found out there once was a MLB player who stole first from second.

The man was Herman “Germany” Schaefer, who also had other nicknames given to him such as “Dutch” and “The Prince”.  Schaefer was a notorious prankster in baseball who would do things like wear rain coats or carry a lantern out onto the field during the game, trying to hint to the umpire that they should call the game because of rain or darkness (more of his zany antics in the Bonus Facts below).

One of his more memorable antics was to steal first base from second (possibly twice, though there is no documented proof of the first instance, just a story from a fellow player, Davy Jones.)  Schaefer is  the only known person to ever steal first in a Major League game and will remain so, because, probably due to Schaefer, a new rule was written shortly after his death at the age of 42 in 1919 from a “brain hemorrhage” and complications due to tuberculosis.  Rule 52, Section 2, which is now Rule 7.08i:

After he has acquired legal possession of a base, [if] he runs the bases in reverse order for the purpose of confusing the defense or making a travesty of the game… [the] umpire shall immediately call “Time” and declare the runner out…

The supposed first instance of Schaefer stealing first, according to Davy Jones, occurred in a game against Cleveland around 1908, with the exact date unknown.  With a runner on third late in the game, Schaefer stole second hoping to draw a throw from the catcher so that the runner on third, Davy Jones, could try and steal home.  Jones gave the following account of what happened next in The Glory of Their Times, by Larry Ritter:

So now we had men on second and third.  Well, on the next pitch Schaefer yelled, ‘Let’s try it again!’ And with a blood-curdling shout he took off like a wild Indian back to first base, and dove in headfirst in a cloud of dust. He figured the catcher might throw to first — since he evidently wouldn’t throw to second — and then I would come home same as before. But nothing happened. Nothing at all. Everybody just stood there and watched Schaefer, with their mouths open, not knowing what the devil was going on.

The umpires were just as confused as everybody else. However, it turned out that at that time there wasn’t any rule against a guy going from second back to first, if that’s the way he wanted to play baseball, so they had to let it stand. So there we were, back where we started, with Schaefer on first and me on third. And on the next pitch, darned if he didn’t let out another war whoop and take off again for second base. By this time the Cleveland catcher evidently had enough, because he finally threw to second to get Schaefer, and when he did I took off for home and both of us were safe. 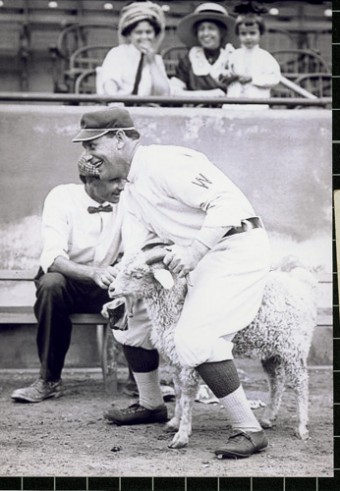 On August 4, 1911, Schaefer, playing for the Washington Senators, pulled the same stunt with less success, but at least this time documented in the newspapers.  In this instance, it was the bottom of the ninth with a similar situation as above.  There was a runner, Clyde Milan, on third who represented the winning run of the game (it was tied 0-0), and Schaefer on first.  Schaefer broke for second and made it, but this failed to illicit a throw from White Sox catcher Fred Payne, as you might expect in the bottom of the ninth in a 0-0 tie where a runner on second is meaningless to the outcome of the game when there is already a runner on third.  On the very next pitch Schaefer stole first, again without drawing a throw.

This brought the skipper of the White Sox, Hugh Duffy, out to argue with the umpires about allowing Schaefer to do this.  While Duffy was still arguing with umpire Tommy Connolly, Schaefer broke for second, this time getting caught in a run-down, at which point Milan tried to steal home, but was thrown out ending the inning.

Not to be dissuaded, Schaefer argued with the umpire that this shouldn’t have counted because at the time of the play, the White Sox had ten team members on the field, though of course Hugh Duffy hadn’t played in a game since 1908.  The umpires didn’t listen to his arguments and ruled that the play stood, as did his steal from second to first base because, at the time, there was no rule against it.  The Senators went on to win the game 1-0 anyway.