This Day in History: 45 People Were Killed, Including 38 Elementary School Students When a Disgruntled School Board Member Bombed the Bath Consolidated School 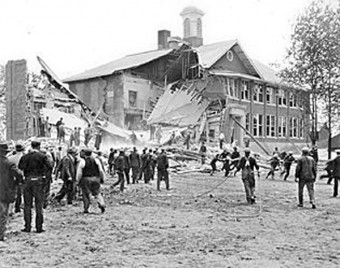 On this day in history, 1927, 55 year old school board treasurer Andrew Kehoe, with his farm in the process of being foreclosed, murdered his wife, burned down his house, then blew up part of the Bath Consolidated School building, which at the time contained around 236 students. He then committing suicide by blowing up his own car when the school board superintendent, Emory Huyck, was near it, so as to take him with him.  In the end, 45 people were killed, including 38 students from second to sixth grade, though as you’ll see soon, it was nearly far worse.

It is thought Kehoe chose the school as a target because of a levy to build a new school building that he had staunchly lobbied against, but none-the-less passed (said building was the one he blew up).  This levy resulted in additional land taxes, which hit Kehoe particularly hard as he was already supposedly struggling to make the mortgage payments on his 185 acre farm, in part due to medical expenses owing to his wife’s terminal tuberculosis.  Eventually he stopped paying on his mortgage, reportedly due to not having any money, and the bank began the process of foreclosing on him.

However, it should be noted that it is estimated that he had enough equipment lying around on his farm that he could have sold it to payoff his mortgage completely with something extra left over.  In addition, he had the value of all his animals which he also could have sold.  Given his intelligence and educational background, other jobs were available to him besides farming once his farming equipment and animals were sold off.  So it’s possible this was more just a case of a slightly deranged person who had a grudge against the school and its board and he simply stopped paying his mortgage as he knew it wouldn’t matter if he was foreclosed upon.

Whatever the initial motivation, he began planning to blow up the school building about a year before he did it, beginning to hoard explosives such as dynamite and pyrotol, left over after WWI, starting around mid-1926.  All-total throughout the year, he purchased about one ton of pyrotol, supposedly to be used on his farm, such as to aid in tree stump removal.  He also purchased several boxes of dynamite from various stores around his area, careful to never buy too much in too short of a period from one store.

As something of an electrician and an engineer, Kehoe was chosen to do maintenance around the school building in 1926, which he began doing (presumably this is when he first hatched his plan). As a result, no one thought anything strange about him working long hours in the basement of the school.  He wasn’t, however, just performing routine maintenance, but was also carefully wiring up explosives to a central alarm clock trigger mechanism.

Either on the day of the explosions or the day before, he murdered his wife by either slashing her throat or bludgeoning her (accounts from newspapers at the time differ on this point).  Next, on May 18 at about 8:45 am, he tied up his animals in his barn and then set the house and barn on fire via firebombs he had made and wired up. He left a message on his fence which stated “CRIMINALS ARE MADE, NOT BORN”.

Next he took his car, loaded with dynamite and various metal items, such as nails, to maximize shrapnel, and drove towards the school.

O.H. Buck gave an eyewitness account of both the burning of Kehoe’s home and the explosions at the school:

Arriving near the Kehoe place we saw that the buildings were afire and speeded up.  The south side of the house was in flames when we got there. We run around to the north windows and two of us crawled in.  We shoved out a davenport, a table and some chairs. Then, in a corner of the room, I found a pile of dynamite.  Without thinking much about what I was doing, I picked up an armful and handed it to one of the men.  The room was filled with smoke, so we got out.

Then I heard a woman across the road yelling that the school had been blown up. We started for our car and had just arrived there when a terrific blast let go in the house behind us.  I was slammed against the car.

We got in and drove rapidly to Bath.  A tragic scene confronted us at the school.  The north half of the building was a jumble of debris.  Several men were digging into the wreckage.  We could hear the voices of the imprisoned children calling for help.  I ran across the lawn and began helping.

I had no more than started when I was bowled over by an explosion at the roadside.  I got up and looked around.  A great cloud of black smoke was rolling up.  Under it, I saw the tangled remains of a car.  Part of a human body was caught in the steering wheel. Three or four other bodies were lying on the ground nearby.

I began to feel as though the world was coming to an end.  I guess I was a hit hazy.  Anyway, the next thing I remember I was out on the street.  One of our men was binding up the wounds of Glenn Smith, the postmaster.  His leg had been blown off.  I went back to the building and helped with the rescue work until we were ordered to stop while a search was made for dynamite.”

Another account of the event by one of the neighbors of the Kehoe’s, Monty Ellsworth, was as follows:

There was a pile of children of about five or six under the roof and some of them had arms sticking out, some had legs, and some just their heads sticking out. They were unrecognizable because they were covered with dust, plaster, and blood. There were not enough of us to move the roof.

Ellsworth then went back to his house to get some rope to help pull the roof off the kids.  On the way, he encountered Kehoe going the other way.  He stated, “[Kehoe] grinned and waved his hand; when he grinned, I could see both rows of his teeth.”

What had happened was about one hour after Kehoe blew up his house, the first explosion rocked the school.  Kehoe had intended that the entire school be blown up, but luckily the first blast seems to have knocked out the triggering mechanism (the alarm clock), resulting in the 500 pounds of explosives under the other wing of the school not going off, so instead of most all of the 250-ish people at the school being killed, about 80% survived, though many more were injured in addition to those that were killed.

The final blast came when Kehoe drove up to superintendent Huyck and supposedly yelled at him, “I’ll take you with me!” and then fired his gun, it is thought at the dynamite, at which point his car exploded killing Kehoe, the superintendent, and a few others.  There was one other tragic causality of this last blast, and 8 year old  boy managed to get out of the collapsed school building only to be staggering near Kehoe’s car when it exploded.