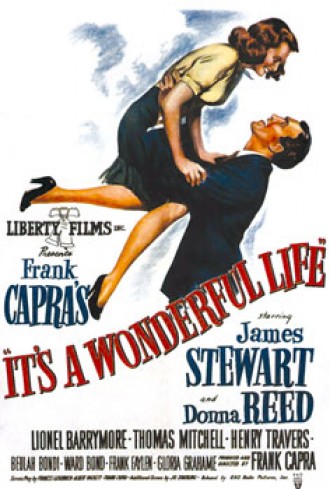 Today I found out It’s a Wonderful Life was based on a “Christmas Card” short story by Philip Van Doren Stern, which was originally sent out to around 200 of Stern’s friends and family in December of 1943.

The short story was called The Greatest Gift and was inspired by a dream Stern had one night in the 1930s.  Stern, already an accomplished author at this point, albeit a historical author, then proceeded to write the 4,000 word short story about a man named George who was going to commit suicide by jumping off a bridge, but was stopped when someone happened by and struck up a conversation with him.  The mysterious person eventually learns that George wishes he’d never been born and grants George his wish.  George soon discovers that no one he knows recognizes him and that many of the people he’d known were worse off in their lives because he had never existed.  Most prominent among these was his little brother who had drowned because he had not been there to save him.    George eventually gets the stranger to change everything back to the way it was and is now glad to be alive.

Stern initially sought to find a publisher for his short, 21 page story, but failed in this endeavor, so decided to make a “Christmas Card” style gift out of it and printed 200 copies which he sent out to friends and family in December of 1943.  This ended up being a gift that gave back, as the work eventually found its way into the hands of producer David Hempstead who worked for RKO Pictures.  RKO pictures then paid Stern $10,000 (around $124,000 today) for the motion picture rights to the story, just four months after Stern had sent it out.  Various adaptations were then written before the screenplay version of the story was sold to Frank Capra’s production company in 1945, also for $10,000.  Capra’s company subsequently adapted the story further and ultimately made it into It’s a Wonderful Life, which debuted in 1946.

Interestingly while the story was based on The Greatest Gift, the character of George Bailey was actually based partly on the founder of Bank of America, A.P. Giannini.  Giannini was also the inspiration for a similar character in Capra’s American Madness.  At the age of 14, Giannini left school and began working with his step father, Lorenzo Scatena, in the produce industry as a produce broker.  By the time he was 31, he was able to sell much of his interest in this company to his employees and had planned to retire.  However, one year later, he was asked to join the Columbus Savings & Loan Society, which was a small bank in North Beach, California.

Once he joined up, he found that almost nobody at the Savings & Loan, nor other banks, were willing to give loans to anyone but the rich or those owning businesses.  At first, Giannini attempted to convince the other directors at the Savings & Loan to start lending to working class citizens, to give them home and auto loans, among other things.  He felt that working class citizens, though lacking in assets to guarantee the loan against, were generally honest and would pay back their loans when they could.  Further, by loaning them money, it would allow working class citizens to better themselves in ways they would not have been able to do without the money lent to them, such as being able to buy a home or to start a new business.  He was never able to convince the other directors to begin lending to the working class.  So he raised funds to start his own bank, the Bank of Italy, which later became the Bank of America.

He then made a practice of not offering loans based on how much money or equity a person had, but based primarily on how he judged their character.  Within a year, Bank of Italy had over $700,000 in deposits from these working class individuals, which is somewhere around $15-$20 million today. By the middle of the 1920s, it had become the third largest bank in the United States.