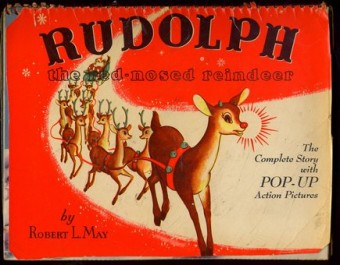 Today I found out Rudolph the Red-Nosed Reindeer was created by the department store chain Montgomery Ward as a way to save money on one of their annual Christmas promotions.

The year was 1939; Montgomery Ward, at that time, gave away coloring  books to try to get more shoppers into their stores during the holiday season.  Up to this point, they simply bought these coloring books to give away.  In 1939, in order to save on the price of the books, they decided to try to make their own.

Enter Robert L. May who was a copywriter for Montgomery Ward in Chicago and was apparently known by his peers to be good at writing limericks and children’s stories.  Because of this, he was chosen to write a Christmas story to be used for this promotional coloring book.

May was very small as a child and was often picked on, so decided to make it an Ugly Duckling type tale, which he wrote in the same verse as Twas the Night Before Christmas.  While he was writing, he tested various versions of the story out on his four year old daughter, Barbara, until he and she were both happy with the results, at which point he presented it to his boss.

May’s boss did not like it at first, due to the fact that he felt a red nose implied the reindeer had been drinking.  However, once it was partially illustrated by Denver Gillen, who worked in Montgomery Ward’s art department and was a friend of Mays, his boss decided to approve the story.

After the war, demand for the story skyrocketed, receiving its biggest boost when May’s brother in law, radio producer Johnny Marks, created a modified musical version of the story.  The first version of this song was sung by Harry Brannon in 1948, but was made nationally popular by Gene Autry’s 1949 version,  selling 2.5 million copies of that version in 1949 alone and has sold to date around 25 million copies.

Interestingly, despite the fact that May created the story of Rudolph and it was wildly popular, he did not at first receive any royalties from it because he had created it as an assignment for Montgomery Ward; thus, they held the copyright, not him.  In a rare move for a business, in 1947, Montgomery Ward decided to give the copyright to May with no strings attached.  At the time, May was deeply in debt due to medical bills from his wife’s terminal illness.  Once the copyright was his, May quickly was able to pay off his debts and within a few years was able to quit working at Montgomery Ward, though just under a decade later he did go back and work for them again until retiring in 1971.