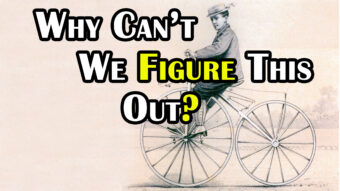 “It’s as easy as riding a bicycle” – so the old saying goes. And indeed in the wide world of transportation few vehicles are as mechanically elegant as the humble bicycle, which at its most basic consists of little more than a tubular frame, two wheels, a steerable fork, a seat, pedals, and a chain drive. This basic configuration has remained essentially unchanged for more than 130 years, so it’s safe to assume that scientists and engineers know everything there is to know about bicycle design, right? Well, no, actually, for beneath the bicycle’s supposedly simple exterior lies a profound scientific mystery. It’s a phenomenon many of us have witnessed firsthand: let a riderless bicycle coast and it will remain upright, resisting all efforts to topple it until it finally slows down and falls over. Yet incredibly, despite more than a century of research, we still don’t 100% understand why.

The first bicycle as we would recognize it today appeared in 1820 in the form of German inventor Karl Drais’s “dandy horse” or “Draisine.” Unlike a modern bicycle, the Draisine had no pedals and had to be propelled by kicking one’s feet rather like a modern scooter. Over the next 70 years the bicycle would evolve into a multitude of weird and wonderful forms, including the popular “penny farthing” of the 1870s and 1880s with its gigantic front wheel. But it was not until the 1890s that the modern “safety” bicycle, with wheels of equal size and a chain drive, finally emerged. This design would take the world by storm, bringing affordable transport to the masses and spawning a global industry worth nearly $50 billion today. And aside from relatively minor improvements in shape, materials, and gear technology, the basic design of the common bicycle has remained more or less unchanged for over a century, making it one of the all-time design classics.

Yet despite the mechanical elegance and success of the safety bicycle, very little science or mathematics went into its design, the configuration having been arrived at through trial and error. It was not until the turn of the century that mathematicians began to seriously investigate the mysterious physics behind the bicycle’s remarkable stability. The most comprehensive early analyses were conducted in 1899 by English mathematician Francis Whipple and in 1910 by German mathematicians Felix Klein and Fritz Noether, who, using rigid-body mechanics, determined that a bicycle’s stability was mostly due to gyroscopic precession. This is the tendency of rotating objects to remain rigidly fixed in space and resist changes in orientation, and is responsible, for example, for keeping spinning tops upright. Thus, according to Whipple, Klein, and Noether, the wheels on a bicycle act as large gyroscopes, their rotation keeping the vehicle upright.

This remained the accepted explanation for bicycle stability for nearly 6 decades, until in 1970 British science writer David Jones examined Klein and Noether’s analysis and discovered a number of mathematical errors that effectively cancelled out the effects of gyroscopic precession. Furthermore, the parameters of the analysis assumed that the bicycle was stationary, even though a stationary bike is demonstrably not stable. To prove his point, Jones built a bicycle with extra counter-rotating wheels that cancelled out the gyroscopic effects of the main wheels, and found that it was just as stable as a regular bicycle. Something else had to be responsible for the bicycle’s remarkable self-righting ability. Back in the 1860s, Scottish engineer William Rankine had observed that when a coasting bicycle begins to topple over, the front wheel automatically steers into the fall, righting the bicycle once more. Indeed, if a bicycle’s handlebars are tied off so that the fork can no longer steer, it immediately becomes unstable. Based on this counter-steering phenomenon, Jones proposed a new model for bicycle steering which he called “caster theory.”

Casters, such as those found on shopping carts, are wheels where the steering axis  and the ground contact point are not aligned, the distance between the two being known as the “trail.” This offset causes the caster to automatically align itself with the direction of travel, allowing all four wheels on a shopping cart to steer at once. Examining common bicycle designs, Jones realized that the standard 72-degree angle of the front fork placed the steering axis – the imaginary line extending along the fork into the ground – ahead of the wheel’s ground contact point, effectively turning it into a giant caster. From this Jones concluded that only bicycles with a positive trail could be stable, and that the caster effect was the sole mechanism responsible for the bicycle’s self-righting ability. And there he left the matter, even boasting in his memoir 30 years later that: “I am now hailed as the father of modern bicycle theory.”

But Jones was a little too quick to rest on his laurels, for soon another researcher would arrive and blow the mystery of bicycle stability wide open. In 1975, American engineer Jim Papadopoulos, working at Cornell University, began reviewing nearly a century’s worth of academic papers on bicycle theory, and was unimpressed by what he found. Like the original Klein and Noether analysis, the papers either made overly simplistic assumptions or mathematical errors, and very few referenced each other or built upon previous studies. After a year of work, Papadopoulos managed to combine all these disparate analyses into a single, unified set of equations, which immediately revealed that Jones was wrong: it was in fact possible to build a stable bicycle with a negative trail, provided the weight distribution was moved far forward. Together with fellow engineer Andy Ruina, Papadopoulos launched the Cornell Bicycle Research Project, with the goal of better understanding bicycle dynamics and passing on that understanding to industry so that better, more efficient bicycles could be produced.

Based on Papadopoulos’ calculations, the team built an experimental device that barely resembled a bicycle, with small wheels and counter-rotating wheels to cancel out the gyroscopic effect, a negative trail to counter the caster effect, and a long weighted boom extending ahead of the front wheels. Amazingly, this strange contraption proved perfectly stable, demonstrating that neither gyroscopic precession nor the caster effect were solely responsible for the counter-steering phenomenon. Further research with a model featuring a small front and large rear wheel suggested a possible alternate explanation: when the bicycle begins to fall, the front end, being shorter, falls over faster than the rear end. However, as the two ends are rigidly connected, the front end pulls the rear with it, causing the fork to immediately steer into the fall and right the vehicle.

Despite this great leap forward, the Cornell Bicycle Research Project was short-lived. Not only had it failed to attract sponsorship from more than a handful of small bicycle companies, but Papadoupolos was slow to publish their findings, later admitting:

“I find much more joy discovering the new and working out the details and, of course, it’s boring to write it up.” (A sentiment that we here at TodayIFoundOut completely concur with :-))

In any event, with few published papers to show for their work, the project dissolved and Papadopoulos drifted away from bicycle research, moving to Illinois where he ended  up as an engineer for a toilet paper manufacturing company.

In 2001 David Wilson, an engineer at MIT and the inventor of the recumbent bicycle, invited Papadopoulos to co-author the third edition of the book Bicycling Science. But beset by a divorce, large debts, and other personal responsibilities, Papadopoulos took a full two years longer than anticipated to complete the work – much to Wilson’s frustration.

Meanwhile Andy Ruina continued to carry the torch of bicycle research, teaming up with fellow scientist Arend Schwab in 2001 to establish a bicycle research centre in – where else? – the Netherlands. In 2003 Papadopoulos joined the team, and together with J.D.G. Kooijman and J.P. Maijaard from the University of Delft, he, Ruina, and Schwab confirmed their results from the 1970s while carrying their research forward into a new, more high-tech domain – for example by building a cycling robot that could keep a bicycle upright through steering alone, without any weight shifting or stabilizing gyroscopes. This research culminated in a groundbreaking 2011 paper titled Bicycles Can Be Self-Stable Without Gyroscopic or Castor Effects.

The Delft research centre has also produced a variety of unconventional bicycle designs such as a stable rear-wheel-steering bike, a rear-wheel drive recumbent, a steer-by-wire bike that decouples the act of steering from that of balancing, and a powered steer-assist bike that automatically stabilizes itself at slow speeds. While these odd creations may seem like mere mechanical novelties, Ruina sees in them great potential to benefit the world, given the millions of people who depend on bicycles for daily transport:

But while the Delft team sees endless possibilities for evolution in bicycle design, the bicycle industry has been slow to adopt their findings. Part of this reluctance is practical: despite being born of trial and error, the classic bicycle design is simple, robust, and just plain works. But another factor is organizational: the UCI, the international governing body for cycling sports, has standardized the design of road race bikes along traditional lines, forcing industry to conform to its guidelines. But Arend Schwab is optimistic, stating in a TEDx talk that:

“My vision is that with careful experiments and validated computer models, we can move past this 19th century bicycle evolution, into a 21st-century bicycle revolution.”

And despite the great strides made by the Delft team and other researchers, much about the dynamics of bicycle stability remains a poorly understood, a mystery both frustrating and exciting for researchers such as Mont Hubbard at UC Davis:

“Everybody knows how to ride a bike, but nobody knows how we ride bikes. The study of bicycles is interesting from a purely intellectual point of view, but it also has practical implications because of their ability to get people around

We are all stuck in the nineteenth century, when there wasn’t such a difference between math and physics and engineering. Bicycles are a math problem that happens to relate to something you can see.”

If nothing else, the fact that the bicycle still manages to stump the world’s leading mathematicians and engineers 130 years after its invention is a humbling lesson in how little we still know about the workings of the universe – a lesson perhaps best expressed by quantum physicist Michael Brooks in 2013:

“Forget mysterious dark matter and the inexplicable accelerating expansion of the universe; the bicycle represents a far more embarrassing hole in the accomplishments of physics.”

Cartwright, Jon, How to Keep a Riderless Bike from Crashing, Science, April 14, 2011, https://www.sciencemag.org/news/2011/04/how-keep-riderless-bike-crashing