April 2, 2015 Melissa
Don H. asks: Do car blinkers click naturally or is there some mechanism added to make the clicking noise to let you know your blinker is on? 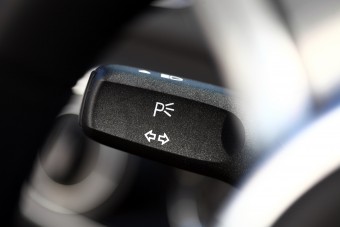 Motor vehicle directional signals have been around almost as long as cars, and as early as 1909, a device was patented that had hand-shaped lights that indicated to other drivers which way a vehicle intended to travel. Obviously, that one didn’t catch on.

Neither did the mechanical signaling device invented by silent-film star Florence Lawrence in 1914, which, after a button was pushed by the driver, a sign would pop up from the rear bumper indicating which way the car was turning.

The first modern directional signal was patented in 1925 by Edgar A. Walz, Jr., although no one was interested in it either, at least until after his patent expired 14 years later. That’s when, in 1939, the U.S. automaker Buick first introduced the “Flash–Way Directional Signal,” which operated in the familiar way – a stick, mounted on the steering column. In its original incarnation, this turn signal only flashed the rear lights; by the next year, front lights were flashing as well. By the end of WWII, directional signals were standard in most American automobiles.

While there are several different designs out there for turn signal switches, they classically used some form of a thermal switch (in this case called a thermal flasher). The core of this switch includes a resistor that heats up when current flows through it. This is attached to a bimetallic spring- essentially an arched strip made up of two sandwiched metals with very different thermal properties, one that expands quite a bit as it warms and the other that doesn’t. The result is that when current is flowing (when you turn on the blinker), the resistor heats up the arched bimetallic spring which in turn is connecting the two terminals, allowing the lights to come on.

At this point, no electricity is flowing and the lights are off.  Because no power is flowing, the resistor and the bimetallic spring rapidly cool to the point where the other metal pressing to reform itself into the arched shape wins, and there is another snap as it once again bends back into shape and re-connects the terminals, starting the process over again.

So in these thermal flashers, the clicking noise you hear is just this bimetallic spring snapping back and forth from its arched form to a straightened form and back again.

One tell-tale sign that you have a thermal flasher in your car is that when a light goes out, the flash rate of your blinkers will slow down- less electricity = more time needed for sufficient heat to build to snap the spring.  In the extreme, where too little current is flowing (like if you try to swap out your incandescent bulbs for LEDs), your blinker will simply not blink, staying on.  On the other end of the spectrum, if you hook up a trailer or something with more lights, it will speed up the blinking rate and in the extreme perhaps even damage your thermal flasher.

Another common device used to create the blink in your blinkers is an electronic flasher.  Instead of using heat and a bimetallic spring, this device simply uses some electronic circuit to control a relay.  Inside a mechanical relay, applied electricity to an electromagnet creates a magnetic field that switches a metallic armature, which in turn makes an audible clicking noise.  When the electricity is no longer applied to the electromagnet in the relay, a spring moves the armature back the other way, either connecting the circuit or disconnecting depending on the type of relay (whether it’s designed to be switched on or off by default).

This type of system has the advantage of not inherently changing the blink rate based on the electrical draw of the lights.  So switching to LED lights or hooking up trailer lights won’t necessarily affect anything, though this does vary somewhat depending on the design of the circuit, particularly in how the system is designed to detect and respond to a burnt out light bulb. But, in general, as long as you’re not drawing more power than the wires, fuse, etc. can handle, the system should blink at a constant rate, with the relay clicking away as it switches the lights on and off.

There is also another type of electronic flasher that is a solid state flasher, meaning it has no moving parts (making it incredibly long lasting and reliable), perhaps using a solid state relay.  This type of system does not inherently click unless the designer specifically chose to add something to do so, possibly added as an extra indicator to the driver that the blinker is on. In most cases, though, there will be no click with a solid state flasher.