Why are Harley-Davidson Motorcycles So Loud?

November 24, 2015 Melissa
Sarah U. asks: Why are Harley motorcycles legal when they are so loud it hurts your ears? 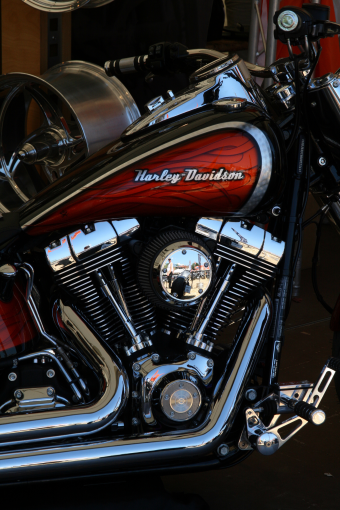 Anyone who’s ever witnessed a poker run knows that Harley-Davidson motorcycles are really, really loud. And since not everyone thinks that’s a good thing, in recent years, there have been efforts to stifle them.

Straight off the line today, Harley exhaust systems can emit noise as high as 80 decibels (dBs), give or take depending on the model. For reference, a typical car when idling emits noise at about 35-45 dB and in the high 50s to low 60s decibel levels at freeway speeds. Even something like a 2008 Ford F-450 truck only gets as loud as 51 dB when idling and 68 dB when traveling at 65 mph.

And while you might think 68 dB isn’t that far off 80 dB, it’s important to understand that the decibel system is logarithmic- in this case, an increase in 10 dB means that this sound level is ten times more powerful.  So, for instance, 80 dB would be ten times more sound pressure than 70 dB.  For further reference, when you’re talking with someone in a normal speaking voice, you’re usually talking at about 60 dB and a lawnmower is usually around 90 dB while a typical military jet engine averages about 120 dB.

Needless to say, apart from older models of Harleys that could sometimes reach as high as 90-100 dB stock, even today’s 80 dB is still really loud. This is far in excess of many cities’ noise ordinances, particularly for residential areas, although it complies with EPA regulations for street level noise. So why do they make Harleys so loud?

For starters, it’s difficult to attain the level of quietness one sees in a passenger car in a motorcycle due to little room for bulky mufflers on the bike. That said, loud, powerful sounding engines have become a signature of this particular brand of motorcycle, leading to the real problem- many who buy Harleys are not satisfied with the legally regulated stock noise of the engine and instead choose to swap out the existing exhaust systems for straight pipes that don’t really mute the engine noise at all. This results in sound that can exceed 100 decibels when revved up.

This is extraordinarily loud, and could even do damage to human hearing. At just 94 decibels (dB) only one hour of exposure can damage your hearing, while at 100 dB, a mere 15 minutes of exposure will do the trick.  Needless to say, the Harley aficionados who make these modifications and don’t wear proper hearing protection while riding pay a long-term, ear-ringing price for making their engines sound more powerful.

Given this sort of extreme noise pollution, there has been a backlash against noisy bikes in recent years, with many local communities placing restrictions specifically on motorcycle noise, and others banning them altogether.

One such effort is EPA stamp enforcement. Motorcycles are supposed to display EPA stamps on their chassis and exhaust systems that match each other to ensure the system hasn’t been modified. While previously enforcement has been lax, more recently communities are mandating compliance, including Denver, CO (2007), Boston, MA (2009), Arvada, CO (2009), Portland, ME (2009), Green Bay, WI (2009) and the State of California (2010)

So strong is the outcry that the President and COO of Harley-Davidson, Jim McCaslin, posted a message on the company’s website in 2009 imploring bikers to not modify their bikes to make them louder. While loud, powerful sounding engines on Harleys in the past have been something of a selling point, McCaslin noted the backlash over the noise today is beginning to cause problems. He further implied that unless bikers piped down, regulations and laws would continue to be put in place until Harley-Davidson could no longer sell its loud motorcycles and the bikes already on the road might ultimately be banned completely.

McCaslin also directly addressed the custom of modifying the exhaust to get more power:

Testing has proven that straight pipes do not necessary outperform pipes with lower noise levels. Pick the wrong pipes and you can severely reduce your horsepower and/or your torque. And while you’re doing it, you’ll awaken the sleeping giant of social concern that lives next door to all of us.

Harley-Davidson has also taken steps to eliminate the modifications by no longer shipping racing exhaust systems that can work on street models to dealers.

Beyond the argument over increasing power, enthusiasts in favor of loud exhaust systems often claim that their “loud pipes save lives,” meaning that because they can be heard, drivers of cars and trucks are alerted to their presence and won’t hit them.

While certainly anyone who’s driven a motorcycle around much is well aware of the fact that many larger passenger vehicles simply don’t notice the motorcycles in their blind spots and the like, antagonists note, however, that the majority of fatal crashes involving motorcycles were caused by the motorcycle rider, at least according to a 2007 report by the National Highway Traffic Safety Administration. In the report, it was noted that 45% of fatal motorcycle crashes are single vehicle (meaning the motorcycle, alone), and that among the remaining 55%, in nearly 75% of the two-vehicle crashes, the motorcyclist was deemed responsible.  That said, the classification of single vehicle crashes that accounts for 45% of all fatal motorcycle crashes does include “run-off-road collisions.”  The debate rages on.