August 25, 2014 Melissa
Jim P. asks: Whenever I ride a bike it always seems to hurt a certain sensitive region. Is this doing any damage down there or should I just suck it up for the exercise? 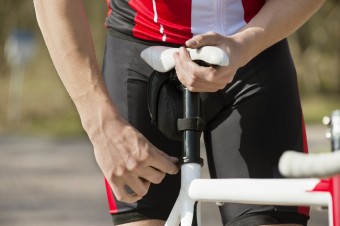 Although bicycle riding affords a terrific aerobic workout, at times avid cyclists may suffer from genital discomfort, sexual dysfunction, and even, possibly, cancer as a result. Luckily, by following a few simple safety measures, you can protect yourself and still enjoy the sport you love.

The Pelvis and the Bicycle Seat

The primary cause of genital complaints from rigorous biking is pressure on the perineum.

Under normal sitting conditions, the perineum (that quiet place between the anus and sex organs) is protected from pressure as the body’s weight rests on the pelvis – more specifically, the strong “sit bones” (ischial tuberosities) that are designed to withstand it.

As bikers know, however, when resting your tush on a traditional bicycle seat (with a teardrop shape and long nose) and leaning forward to grasp the handlebars, your private parts come not only into contact with the seat, but end up taking some of the upper body’s weight, as well.

In fact, studies performed on male bicycle patrol officers have shown that typical pressure on the perineum while biking is at about 2.9 psi, although at times it can reach levels nearly twice that. It is no wonder, then, that for some people this additional pressure causes problems.

The main artery and nerves that supply the labia and clitoris with blood and feeling run through the perineum. During biking, these are compressed, decreasing blood flow and sensation, and resulting, sometimes, in numbness and pain. In fact, a recent study revealed that 60% of serious female cyclists had pain, tingling or numbness within a month of the study, and that women cyclists, generally, had decreased sensation in their genital region.

In addition to problems from pressure, avid women bikers can also develop a number of health issues from the combined assault of moisture and friction. These include bladder infections (which are known to increase when the urethra is irritated – such as from rubbing on the saddle) as well as vaginitis (either from yeast or bacteria).

Chafing combined with pressure can also cause saddle sores.

Reduce pressure on the perineum by investing in a new, noseless saddle like this one and ensuring the seat is properly adjusted (neither too high nor too low). While these do take some getting used to- you’ll be amazed how much you were previously using the nose of the seat to correct balance- it shouldn’t take too long before you adjust. (And if you’re skeptical about the nose/balance thing, note: contrary to popular belief, the wheels spinning on the bicycle do almost nothing to keep you balanced as you ride.) In any event, many experts recommend a wider saddle to better fit a woman’s anatomy, but note, however, that cut-out saddles are not recommended. They have been found to actually increase pressure on the perineum.

To improve sensation in the genital region, place the handlebars higher than the seat. In a recent study of 48 competitive female cyclists, it was revealed that the higher the handlebars the less pressure was placed on the genital areas and the increased nerve function.

To avoid infections and saddle sores, lady cyclists are encouraged to invest in a good pair of women-specific bike shorts and to not wear underwear with them. In addition, they should focus on hygiene and clean and dry the genital area as soon as possible after a ride, as well as follow general advice to limit infections, such as wiping front to back and wearing cotton underwear. Finally, many professional women cyclists recommend shaving or waxing the area to lessen friction.

Although chafing can be problem, most of the genital health issues developed by male cyclists are due to pressure.

Just like the ladies, the primary artery and nerves that deliver blood and sensation to the penis run through the perineum, along the side of a bone. In addition: “The penis (and the female clitoris) is attached deep within the pelvis. It does not end, as it appears to, at the scrotum but rather near the anus. Like the roots of a tree, this internal part of the penis provides stability so that an erection doesn’t buckle . . . .”

When a cyclist sits on a traditional, nosed saddle, those vital conduits are compressed, which results in a reduction of blood flow and sensation. In fact, with a traditional teardrop saddle (with nose), studies have shown that the “amount of oxygen reaching the penis typically falls 70 percent to 80 percent in three minutes.”

Likewise, in a 2002 study of bicycle patrol officers who rode an average of more than 5 hours per day, it was revealed that 91% had endured groin numbness at some point, and that it affected the quality and rigidity of their erections.

Notably, erectile dysfunction is sometimes linked to localized atherosclerosis in the vessels that serve the penis; just like the hardening of the arteries that leads to cardiovascular disease generally, it is believed that the chronic compression of sitting on a traditional, nosed bicycle seat can damage the endothelium, leading to inflammation, plaque and eventually, a blocked artery.

Like the advice for women, men are also encouraged to switch to a no-nosed seat and have it adjusted to the proper height, so legs are neither over- nor under- extended when the pedal is at the bottom of the stroke. By changing seats, according to a 2008 study, cyclists can reduce groin pressure to 1.02 psi (65%) with nearly none of the pressure experienced in front of the sit bones.

Also situated between the weight of the body and the hard seat is the prostate, a walnut-sized gland that surrounds a man’s urethra where it exits the bladder. Recent research has revealed an association between avid cycling in older men and prostate cancer.

In the 2014 study, over 5,000 habitual male cyclists (aged 16-88) were surveyed, and among those over age 50 who biked more than 8.5 hours each week, it was found that they were six times (600%) more likely to have been diagnosed with prostate cancer when compared with those who biked less than four hours each week (those who biked between four and 8.5 hours were three times more likely to have a prostate cancer diagnosis).

However, cyclists should note that these were results from only one study, and it only demonstrated an association between biking and prostate cancer, not that the biking caused it.  Correlation does not equal causation.

Although any Google search will produce webpages that claim a link between cycling and testicular cancer, other than one study from 1982, I have found no scientific basis for this assertion.

In fact, according to the American Cancer Society, the primary risk factors are undescended testicle(s) (meaning still in the abdomen at birth), family history, HIV infection, cancer in the other testicle, age (half of these cancers occur in young men aged 20 to 34) and being Caucasian.