Why Do We Have Moles All Over Our Bodies and What Do They Do? 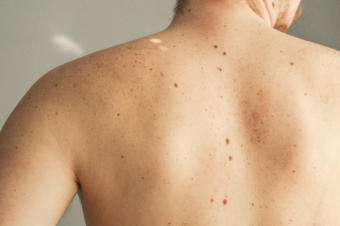 Moles, in general, are simply an abnormal grouping of cells called melanocytes. Melanocytes are the cells responsible for giving your skin its pigment. They reside in the basal layer of your skin, and overall, have a surprisingly uniform distribution. Their density will vary depending on the part of the body they reside in. For example, there are around 900 melanocytes per square mm on your back, and around 1500 per square mm around your genitals. During fetal development, their progression stops at the palms of your hands and soles of your feet.

They don’t just reside in your skin however, they’re also found in the cochlea of your ear, the iris of your eye, and part of your brain stem called your mesencephalon.

When melanocytes group together it’s called a nest. These nests will show up as a mole. While it isn’t fully understood why moles develop, it’s known that most begin during fetal development.

If you are born with a mole, its termed congenital. About 1 in 100 people are born with congenital moles, and they’ll vary greatly in size and shape, depending on the person. Should your mole present itself after your born, it’s called an acquired mole.

Acquired moles are so common that many researchers argue they shouldn’t even be referred to as an abnormality. Almost everyone has at least one and most people with light skin have between 10-40. No one has definitively shown why someone will acquire a mole, but there are risk factors, such as increased exposure to UV light and many genetic causes, including mutations to certain types of genes. These types are usually round, symmetrical and have the same color throughout (usually brown, tan, black, or red). Almost all are smaller than a pencil eraser.

Both congenital and acquired moles are considered typical, and dermatologists generally note you shouldn’t worry about them. Simply check them over time, noting their size, shape, and color as you age. If they do change significantly, it could be a sign of melanoma (cancer of your melanocytes), and thus such changes should be checked out by a professional.

That brings us to atypical moles. Also known as dysplastic nevus or Clark nevus, they’re usually larger than a pencil eraser, tend to have shapes that aren’t round, and will show more than one color, usually with mixed shades of brown, red and pink.

There are three main types of atypical moles, and they can also be, either inherited or sporadically acquired. Since many melanomas are mutated from atypical moles, should you have these, check them occasionally.

There’s some confusion among doctors as to how often you should check them, because studies have consistently shown that about half of atypical moles will change over the course of 89 months and aren’t a problem at all. The exact chance of having one of yours turn into something more sinister is still only about 1 in 200,000.

Of course, while the risk is extremely low, since we are talking about cancer, if you’re worried about it, get checked!

The three main types of atypical moles are: Spitz nevus, Melanocytic nevus, and the dreaded Melanoma.

Melanocytic nevus are basically just moles that are classified as benign tumors. (note: they’re named the same thing as typically acquired moles, but it seems the literature separates them out because they tend to be larger, appear later in life and have a somewhat specific cause.)

The exact mechanisms that make the grouping of melanocytes so large they become tumors isn’t fully known. It’s thought one ingredient might be from a type of growth factor (fibroblast) released by a skin cell (keratinocyte) after a traumatic event- something like a second-degree burn, a severe sunburn or any exposure to UV light, or disease processes like toxic epidermal necrolysis, and epidermolysis bullosa.

Even though men and women have the same rates of development, there does appear to be some involvement with sex hormones. It’s known that pregnant women tend to have theirs darken or enlarge. They’ve also been shown to have receptors for two sex hormones (androgens and estrogens). Since Melanocytic nevus responds to these hormones, it’s thought the receptors are the reason.

This brings us to Spitz nevus. These little malformations are so similar to melanoma, most dermatologists can’t distinguish them from their cancerous-counterparts. Nearly all are dome-like and pink. Some, however, do have a red, black or brown appearance and have been known to bleed or ooze. They normally occur in the first 20 years of life.

Now to cancer. Melanoma on average kills one American every hour. In fact, the vast majority of people who die from skin cancer are those with melanoma. Melanoma cases are growing at an alarming rate. For women before the age of 44, it’s increased annually by 6.1% and overall melanoma rates have doubled in the US from 1982 to 2011.

UV exposure is thought to be one of the biggest contributors to the increase. In fact, the use of a tanning bed before the age of 30 will increase your risk of getting melanoma by 75%! But even just with the sun, if you like baking like a cake, stop doing that! No one wants leathery skin at 40 or a deadly disease, so use sunscreen and for those trying to darken up, instead learn to accept you for you. As ever, it’s not about the color of your skin, but the content of your character. Dead bodies don’t have much character.

The two main ways to get melanoma are genetic, or as stated previously, one of the moles you have turns against you and becomes cancerous. The overall risk of melanoma, if your white, is about 1 in 150. The chance of a typical mole turning into melanoma is 1 in 200,000. Your risk can reach as high as 100% if you have a condition called Familial Atypical Multiple Mole Melanoma Syndrome (FAMMM).

FAMMM is a problem in which someone has over 50 moles (usually many more), some are atypical, and have a blood relative who has had melanoma. If you’re freckled with moles like zits on a teenager, you might want to make sure you have a good dermatologist and become best friends with them.

As with all types of moles, the exact mechanism behind melanoma, or FAMMM, isn’t exactly known. What has been shown is those with melanoma have gene mutations, specifically, changes to genes CDK2NA, CDK4, and CMM1. Interestingly, 3 mutated genes, PTEN, BRAF, and MCR1 are associated with melanoma but not with people who simply have sporadic atypical moles.

Some people who acquire melanoma from atypical moles will also have mutations to tumor suppressing genes. No matter what genes are involved, every study shows that exposure to UV light will greatly increase your chance of having atypical moles turn into melanoma.

In the end, almost every light-skinned person on the planet has moles. The vast majority of people will never have to worry about anything ominous with them. No matter the type, if you’re at all worried about it, get it checked by a dermatologist. The 5-year survival rate for melanoma is 98% if caught before it spreads to your lymph nodes. Past that point, it decreases dramatically to around 18%!

So keep tabs on your blemishes. If nothing else, it may give you an excuse to ask for someone to stare at you naked. You know, for your own health. The effort put forth could then lead to a carnal reduction in the stress you had about them in the first place.