November 12, 2014 Karl Smallwood
Ryan C. asks: How do they make tattoos permanent? In other words, how do they get tattoos to remain even as your skin is constantly regenerating? 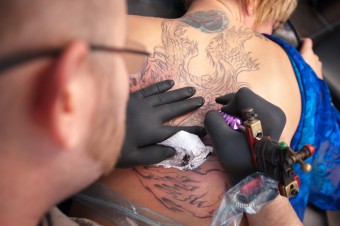 Depending on the source you consult, anywhere from 14 to 23 percent of American adults and about 24% of British adults have at least one tattoo, a figure that one would think is set to rise considering the rather permanent nature of tattoos, ever increasing life spans, and that the tattoo is steadily becoming more socially acceptable.

So why are tattoos permanent when skin is supposedly continually regenerating? To answer that, you need to understand that not all of your skin is regenerating itself so regularly. You see, your skin is essentially made up of two layers, an inner layer known as the dermis and an outer layer known as the epidermis. When people say that skin is “constantly regenerating”, they’re almost certainly referring to the epidermis, and perhaps one of the layers of the epidermis- the dead layer of skin on top, known as the stratum corneum. This does indeed get frequently replenished as those dead cells are shed and new ones take their place. This process happens via keratinocytes which grow in the lower layers of the epidermis, starting at the stratum basale; over the course of about 2-4 weeks, these cells will gradually develop and make their way to the top of the epidermis where they die off and form the stratum corneum.

However, the innermost layer of skin, the dermis, doesn’t replenish itself nearly as often, with it being, for the most part, protected from harm by the epidermis. In the event of a cut or injury damaging the skin deeply enough to affect the dermis, it is more than capable of repairing itself, with this action likely resulting in a scar where the wound once was. (See: How Scars Form) A superficial cut or wound to the epidermis, on the other hand, shouldn’t leave a scar at all. 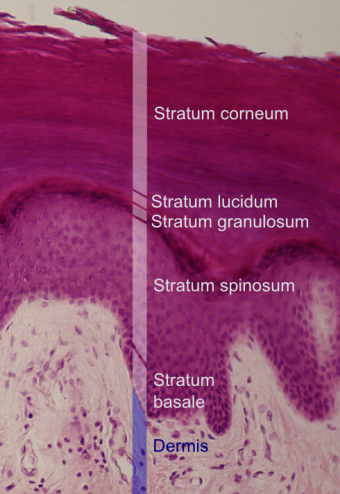 So with that understanding, let’s move on to answering the question at hand- why don’t tattoos fade or “heal” themselves over time? The answer is simply that tattoos are applied to your inner layer of skin, not the outer layer.  You see, a tattoo machine works by moving the needle up and down extremely rapidly (about 50-150 times per second), piercing the outer layer of the skin and injecting drops of the ink into the dermis with each puncture. Over the course of the next 1-2 months, the skin slowly repairs itself and, while there is some initial loss of ink during the healing process, ultimately with proper care the bulk of it is trapped in the layer just below the boundary between the epidermis and the dermis; here it will generally remain for the rest of your life, assuming no major damage to the dermis in the region of your body the tattoo resides.

Of course, as anyone who’s had a tattoo for several decades will tell you, it does fade a little over time.  So what gives? As with all things, there are exceptions to the “permanent” nature of tattoos. For example, if a tattoo is too shallow, or if it is improperly taken care of soon after it is applied, such as soaking the area in a hot tub directly after getting the tattoo, the colours and lines can rapidly fade as some of the ink escapes through the freshly wounded skin. It’s also possible that over the course of many decades the pigment will get pulled deeper into the dermis, making it less visible on the surface of your skin and changing the colourisation slightly. This can happen for a variety of reasons including inflammation of the dermis.

In addition to that, a tattoo will also naturally fade over time due to ultraviolet rays from the Sun effectively bleaching the pigment. The more you tan with the tattoo exposed, the faster this will happen.  Stereotypical bloggers living in our mothers’ basements aside, most people do get natural sunlight on their skin from time to time. And if your tattoo is in an area you readily expose while in that place I’m told exists on the other side of a home’s walls, some fading is mostly unavoidable, though can be reduced with the judicious use of sunscreen. Or you could simply change careers and become a full time writer online.  Besides the perk of never needing to shower or do laundry, you also will be able to keep that peculiar glowing orb in the sky away from your precious skin and tattoos.