October 13, 2019 Karl Smallwood 6 comments
Hippiekiyay asks: Do pets care if you leave the radio on when you leave? 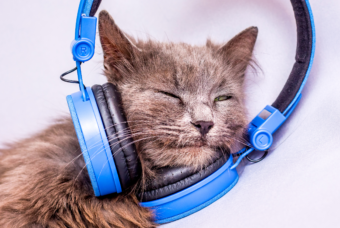 A survey of about 2000 British dog owners conducted in early 2017 found that around 40% of dog owners admitted to leaving the radio on when they left the house so that their dog wouldn’t be lonely, while another 32% admitted that they did the same thing, just with the TV. In yet another British study, this time in 2015, it was found that 38% of those respondents left the radio on and 22% the TV. Whichever study you look at there, this practice is shockingly common, at least in Britain. But do your pets like this?

Starting with our canine counterparts, while the research we have thus far isn’t exactly robust, it would appear that, at least in the case of music, yes, in some cases dogs do respond to this in a positive way. For example, consider the results of research conducted in 2002 by psychologist Deborah Wells from Queen’s University in Belfast. In a nutshell, Wells’ study involved randomly playing music through some speakers for a group of about 50 dogs at a re-homing shelter in the UK and noting what, if any, effect it had on the them. After a baseline reaction was found by observing the behaviour of the dogs when no music at all was playing, researchers then played one of three CDs- for those unfamiliar, a kind of round shiny object people used to store music and other data on, often used for playing music in their hitched up covered wagons. Each CD contained a curated playlist limited to a specific genre, in this case, pop, classical and heavy metal. Finally, a fourth CD contained the sounds of a human conversation.

So what were the results? The study found that classical music appeared to have a definite calming effect on the dogs with there being a noticeable decrease in the amount of noise and activity, and an increased number of dogs choosing to simply lay down, compared to when there was either complete silence or the sounds of human conversation piped into the room. On that latter point, it is interesting to note that the human speech didn’t seem to make any difference to the dogs. Meanwhile, music by the heavy metal band Metallica seemed to agitate the dogs present. Finally, pop music, which included the likes of Brittney Spears, much like the sounds of human conversations, appeared to have no observable effect on the animals.

Moving on to a study in 2017 conducted at a shelter operated by the Scottish Society for Prevention of Cruelty to Animals, the researchers attached heart monitors to the dogs to attempt to better determine the effect the music was having on them on top of just visual observation. The results? Professor Neil Evans of the University of Glasgow notes, “Overall, the response to different genres was mixed highlighting the possibility that like humans, our canine friends have their own individual music preferences. That being said, reggae music and soft rock showed the highest positive changes…”

However, beyond potential personal preference, there may actually be something else going on here that is significant in helping to determine which types of music and sounds a given type of dog will like or not. To see why, let’s now look at cats.

While the studies are limited to date, the data so far seems to indicate that cats do not respond to music nearly as well as dogs… at least at first glance. An important thing to remember here is that cats’ hearing spectrum is different than a human. Further, it turns out what frequencies their brains are more tuned to pay attention to are also in a different range. Thus, given both of these things, what they consciously hear when they listen to our music is different than what we hear.

Given this and other animal studies that have shown animals tend to respond more to sounds within their own vocal range, researchers at the University of Wisconsin-Madison, led by psychology professor Charles Snowdon, decided to see what would happen if they made “cat music”- essentially music that was tuned to center in the frequency ranges and tempos cats pay most attention to. In this case, as cats’ vocal range is about one octave higher than a human’s, they had composer Professor David Teie create music in this range. As for tempo, they went with approximately the average rate a cat purrs at, as well as a separate piece of cat music with a tempo equivalent to that of a kitten suckling.

And, it turns out, when playing this music to 47 cats in the study compared to playing two different classical music pieces, the cats did indeed react significantly more positively and pay more attention to the cat music, whereas the human classical music garnered fewer positive responses and reactions, and even those that did react positively to this music took approximately an additional minute to seem to notice it at all. As for the cat music, while not every cat responded, the ones that did tended towards a positive response in the form of purring and sometimes even rubbing up against the speaker playing the music.

This may also help explain why it takes so much longer to train a cat to obey verbal commands, even when offering a food reward. For example, consider a study done in 1915 at the University of Colorado which seemed to show that cats were colorblind.  In it, the experimenters had one jar wrapped in gray paper, and another in color paper. If the cat touched the colored jar, they’d get a tiny fish as a reward.  18 months and 100,000 tries later, the cats used in the study had only been 50% successful at picking the right jar the first time. Clearly they couldn’t see color, right? Wrong.

Given cats have both cones and rods, further experiments have been done in more modern times using electrodes monitoring the cat’s brain, definitively proving cats can see colors. So why couldn’t they figure out which jar to pick to get the treat they wanted?

While you might think just to screw with the researchers- cats gonna’ cat- it turns out that even though they can distinguish a variety of shades of color, their brains just aren’t really wired to pay attention to colors, though if one spent enough time training a specific cat,  you can get them to do so. It just takes an astounding amount of training before the color registers consciously.

For example, the aforementioned “fish” experiment was re-done in the 1960s, and this time it was found that if working with an individual cat long and consistently enough, they would learn to pay attention to the color, but it took a whopping average of 1550 tries per cat for them to learn to pick the colored jar. Once they did, they consistently picked it as they did indeed want the treat inside.

Going back to sounds, this may be why, as any cat owner knows, if you call your cat using super high pitched vocalizations spoken rapidly like “kitty-kitty-kitty-kitty” cats tend to come more quickly than if saying the exact same thing just speaking in normal tones and speeds where they may not respond at all. Thus, while studies would need conducted to test the hypothesis, it may be when talking about verbal commands that perhaps cats aren’t just being dicks as they appear, but rather, you’re not speaking in tones and at tempos their brains naturally consciously pay attention to without significant training.

Whatever the case, going back to dogs, it’s hypothesized by the researchers of the University of Wisconsin-Madison study that this may be why different dogs respond slightly differently to different types of human music given that different breeds of dog have different vocal frequency ranges and resting heart rates. If your curious, breeds like the Labrador have some of the closets vocal ranges and heart rates to humans, with our music likewise generally centered around our vocal ranges and the tempo of our heart rate.

On a similar note, a 2010 study, also done by Professor Snowdon studying cotton-top tamarin monkeys, whose heart rates are approximately twice a typical humans and vocalizations roughly three octaves higher, likewise found that music centered around these frequencies and tempos seemed to appeal to the tamarin monkeys, both in its ability to agitate the monkeys and to calm them, depending on the composed pieces of music. Further, the tamarin monkeys had no such responses to human music played for them.

Moving on to leaving a TV show on for your pet, the hypothesis is that familiar background noises, particularly human speech, will sooth your furry companion. However, the data on whether this actually works or not isn’t robust enough to mention, and it is noted in the aforementioned music study that playing sounds of human conversation appeared to have no effect on the dogs compared to silence. Of course, if one played a recording of a dog’s master talking, this might change the results, but no study to date we could find has ever tested this hypothesis. That said, for anyone who has ever used a web cam with a speaker to talk to their pets while away from home knows, the animals most definitely respond to this speech, though whether this is enjoyable for them or a big confusing tease is anyone’s guess.

On another anecdotal note, in areas where significant outside noises seem to stress a given dog, causing a lot of barking and the like, many owners claim that drowning out this noise with TV, radio, or a noise maker seems to help keep the animals more calm.

As for cats and TV, there doesn’t seem to be any real data here either. But we’re just going to go with the age-old “Cat’s don’t care” as that seems to apply to our feline friends at least 99.99% of the time, particularly as in this case what is being shown on TV is not typically within the vocal ranges and tempos of speech that cats otherwise respond to anyway. Cats also, of course, don’t typically suffer from separation anxiety to the extent that dogs often do, further perhaps making this not matter.

But to conclude, while the data to date is limited, it does at least so far seem to be pointing to your furry forced friend enjoying it when you leave some music on for them, though for best results you need to tailor the music to the animals, with cats responding best to specially made cat music. And if you’re now wondering- yes, this does, in fact, exist for sale online. This is thanks to the aforementioned composer Professor David Teie. Since the cat study he took part in and a subsequent Kickstarter where he raised an astounding quarter of a million dollars despite a massively more modest initial goal, he has gone ahead and composed a cat music album for sale online, technically making him the biggest musical star in the world to our feline masters.