The Secret Club Inside Disneyland Where You Can Buy Booze 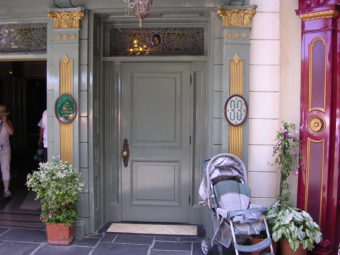 Disney has undeniably made a lot of unusual business decisions over the years, like that time they built a town in Florida in an attempt to create a perfect community that ended up being a haven for old people to have sex with each others’ wives while fake snow falls outside. But the one that keeps us up at night is the decision to call Disneyland “The Happiest Place on Earth” and not serve alcohol there despite literally maintaining a park-wide liquor license at a park where you can’t get liquor. On that note, as it turns out, you can buy alcohol in Disneyland, it’s just that the bar is hidden and costs an insane amount of money just for the right to enter.

Named for the physical address at which it resides in Disneyland – 33 Royal Street in the New Orleans Square section of the park (near where the Pirates of the Caribbean ride gets out), Club 33 was originally conceived by Walt Disney as a place to entertain Disney investors and VIPs. The idea supposedly came to Walt while visiting the New York World’s Fair in 1964 and noting the existence and popularity of exclusive VIP lounges and bars.

After some discussion with various entities, Walt – who wasn’t keen on the idea of alcohol being consumed in his park -floated the idea of building a hidden lounge inside of a new area of the park then being constructed. This was an idea the executives loved, because who wouldn’t enjoy the idea of slamming shots with fellow wealthy people from an official Mickey Mouse shot glass, all while laughing at all the plebeians having to pay to spend a day without alcohol.

In a move that would make John Hammond proud, Walt spared absolutely no expense during construction, even going as far as to hire legendary illustrator and production designer Dorothea Holt Redmond, generally remembered for her work with Alfred Hitchcock and on Gone with the Wind and Ten Commandments.

Among other work on Disneyland and Disney World, concerning the club, Disney had her come up with detailed and elaborate designs of what the best possible version of the club would look like to use as a template. What she drew up was the design for the trophy room and the Napoleon-style, ultra upscale dining area. As for the rest of Club 33, it comprises an additional dining area and various connected areas, including balconies overlooking the New Orleans portion of the park.

When it came time to decorate, Walt and his wife physically travelled to New Orleans with a Hollywood set designer to pick out fancy, exorbitantly priced antiques. As an example of the kind of insane levels of perfectionism Walt insisted upon, up until the club was renovated in 2014, guests were taken to the second floor by an “antique” French elevator. The elevator was an exact replica of one Disney encountered during a trip to Paris with his wife and became enamoured with the novelty of. Disney attempted to buy the elevator in Paris to place in the club, but when the owner refused to sell, he instead sent a team of Disney engineers to Paris to study the original so that the replica would be as accurate as possible. The club is also, as you’d expect, decorated with Disney memorabilia, including rare artwork and sketches from Disney films.

Perhaps the oddest feature of the club and one that Walt insisted upon personally is a large animatronic vulture in the club’s “Trophy Room”. It was Walt’s original intention for small microphones to be installed in the light fixtures that would allow the vulture to “listen” and then converse with guests via an operator monitoring everything.

The novelty evidently wore off, or perhaps people just didn’t like their conversations being listened to by some creepy dude sitting in a room by himself, and the wiring was removed a few years after the club opened. The vulture is still there today, however, maintaining an eternal, silent vigil over the club, waiting for the chance to listen to everyone’s personal conversations again.

As for how you physically get into the club, this involves pressing a hidden buzzer in the mysterious door marked 33 in New Orleans Square. After proving your membership and reservation, the door is unlocked and you’re whisked into the lobby and then taken to the dining and bar area, originally via the aforementioned lift or a staircase in the Court of Angels. However, following extensive renovations in 2014, it was found that the elevator did not meet modern codes. It’s not clear if this has ever been updated or if guests are simply required to use the stairs now, which would be a bit of an accessibility issue if so.

Whatever the case, sadly, Walt’s insistence on perfection meant that the club, despite being conceived as early as 1964, wasn’t completed until May of 1967, 5 months after he passed away.

Shortly before Club 33 opened, Disney paradoxically sent out brochures advertising their new secret, super-exclusive lounge to individuals they felt may want to become members who didn’t necessarily warrant automatic membership like sponsors or Disney executives. Even today, the exact number of total members of Club 33 is a closely guarded secret, though most estimates say there are around 500, with a further 800 said to be on the waiting list before they stopped allowing anyone to be added to said waiting list.

To highlight how ridiculously exclusive this club is, the average waiting time for memberships is said to be around 14 years. The cost of membership, as with most things, has steadily risen over the years with most sources reporting that today it is about $25,000 for individuals and $45,000 for businesses, then after that, an additional $12,000 in fees every single year.

Speaking of membership, though Disney did offer both Gold and Silver Membership options in the past, both of which offered entrance to Club 33 but limited the number of guests members could bring with with them, amongst other things, they have since stopped for reasons that aren’t clear and now only offer Platinum membership to individuals. The only other option for membership, aptly known as Business Membership, is offered exclusively to businesses. Functionally identical in practise to a Platinum Membership, Business Memberships have the added bonus of being able to be used by many employees of the owning corporation, making them useful for impressing clients or, we presume, arranging team-building exercises in Disneyland.

Before they’re even allowed to become a member though, individuals and businesses must submit themselves to an invasive and “rigorous” background check” to ensure they’re Club 33 material.

As for who exactly are the members of this very exclusive club, only Disney knows. However, for whatever it’s worth, supposedly Tom Hanks, Jack Nicholson, Guillerno del Toro, Christina Aguilera, and Elton John are a few celebrities that maintain a membership.

So, outside of entrance to the club facilities, what exactly do people get for paying this insane amount of money and jumping through all the hoops? Well, not much. In fact, despite the huge annual fee, you still have to pay for any food and alcohol once inside, with one anonymous member noting a typical meal there costs about $150 per head, plus additional for drinks. He also states the quality of food isn’t worth it. “The food was worth the price 5+ years ago. Now, in my opinion, is over priced. It’s fancy and creative food but there are better places to eat in the area. I always tell people to go for the experience, not the food.” He also notes it’s best to make a reservation many weeks in advance if you want to make sure you can get a table on a given day.

Going back to specific benefits, Disney does not publish such a list publicly, and members on the whole seem reticent to even mention they are members for fear of having their membership revoked. That said, it would appear from accounts from the few willing to talk about it, beyond of course being able to get in at all, membership includes the ability to ride inside the Lilly Belle train car when it’s in use, and visit the wheelhouse of the Mark Twain Mississippi Riverboat, though in both cases only if you book well in advance. Members also periodically get invited to preview new rides, as well as tour behind the scenes.

Members are also apparently granted access to the much more exclusive Club 1901 in California Adventure. As for what this is, Club 1901 is described by Disney Imagineer Ray Spencer as follows: “Imagine it’s the 1930s, and this is where the animators would’ve hung out, swapped stories, doodled on napkins. This is the place Walt and the animators might’ve chatted, relaxed, unwound . . . a cozy den.”

Unlike Club 33, Club 1901 is exclusive to the members and their spouses or domestic partners and limited guests they bring with them, whereas Club 33 allows you to give away a small number of passes to those you know, without you needing to be there at all. That said, we did find one report in 2015 that claimed Disney was looking to cease giving out those VIP passes that allow non-members to come without the members themselves coming too, but we could not confirm this. Supposedly the trade-off here was that Disney was revoking this ability, but then adding a perk of being able to get into the park for free instead of having to pay like lesser humans.

Unsurprisingly, this change didn’t sit well with members, particularly as they used to be able to get into the park for free if they purchased a meal at the Club on a given day, but then Disney took that perk away too.

Perhaps the most useful feature of the membership is that members have access to a Disney concierge who helps to arrange anything you like while at the park within the bounds of the rules of the facility. Members also get fast track tickets to bypass lines and receive complimentary valet parking whenever they visit. They can also usually expect to receive an upgrade when staying in a Disney hotel or traveling via one of their cruise liners.

In the end, for most people, the value of the membership doesn’t so much lie in the perks it grants, but rather the mystique and air of exclusivity surrounding the membership itself, with many using it to impress business associates and friends, as well as to artificially inflate their sense of self importance to try to fill that empty void inside of themselves, which is, of course, the ultimate goal of pretty much everyone in that general section of California. Plus, we’re guessing it’s kind of fun to to ride Space Mountain after about 7 beers.