Using a Charge Card to Buy $170 Million Painting- The Centurion

May 22, 2017 Karl Smallwood
John T. asks: Is it true that there’s a special black credit card they only give to billionaires that they can buy anything with? 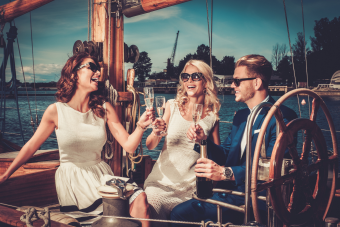 Throughout the late 1980s and early 1990s there was a legend that was passed around speaking of a special credit card only issued by American Express to people with more zeroes in their bank balance than a half eaten bowl of Cheerios. This was, of course, not true, or at least it wasn’t until 1999 when American Express decided to make the card a reality. To quote a director for the company, Doug Smith, “There had been rumors going around that we had this ultra-exclusive black card for elite customers. It wasn’t true, but we decided to capitalize on the idea anyway.”

Dubbed “The Centurion Card”, this card is functionally identical to an American Express platinum card with a few added benefits exclusive to Amex’s most affluent customers. We won’t bore you with some of the more mundane benefits of being rich enough to have a platinum card, like hotel upgrades and having most transaction fees waived, because there’s a much more interesting benefit to talk about- the 24 hour concierge service.

Yes, the platinum customers have unlimited, round the clock access to a number they can call for help doing just about anything. While on paper the service is supposed to be used for things like booking hotels or finding restaurants in a city one is not familiar with, if the individual is a little more, shall we say, creative, the service is essentially a 24 hour personal assistant. For example, consider the story of internet prankster John Hargrave, who once tried to push the limits of a similar service offered by his Visa Signature Chase card.

Hargrave found that his concierge service were happy to help him do everything from book a trip to space to help him with a crossword puzzle he was stuck on. However, after asking a representative if there was something they wouldn’t do, he discovered it was against Chase’s policy to use the service to run personal errands, plan a wedding or help arrange a visit to a child prostitute… The company did, however, admit that they’d be more than happy to help “make an appointment for a rendezvous at the Bunny Ranch” (a legal brothel in Nevada), if a customer so desired it.

Now, keep in mind, this is the level of service offered by a regular credit card a person with an average income could afford- so imagine what kind of things a billionaire with an uber-exclusive card only granted to the upper echelons of society can get if they asked.

If you’re imagination isn’t all that great, according to one executive at Amex asked about the most outlandish requests the company has fulfilled, he noted they were once asked to deliver a handful of sand from the Dead Sea to London. The company did this by sending an international courier to the shores of the Dead Sea on a motorcycle.  The courier then posted the sand to the customer. Apparently the sand was to be used in a school project.

In another case, the cardholder wanted to appear on a soap opera, but wasn’t sure how to make this happen.  The Amex representative managed to get the woman an audition for a role in such a show.

Yet another bizarre request was from someone wanting Amex to find the horse ridden by Kevin Costner in Dances with Wolves. They were not only able to track this down for the customer (with the horse then residing in Mexico), but were also able to arrange for purchase of the animal and then had it transported to Europe where the customer lived.

In addition to a more tailored, dedicated concierge service, the Centurion Card comes with a personal travel agent, automatic access to a number of high-end clubs for rich people, and personal shoppers for the most exclusive stores in the world. The card also grants extensive travel related benefits such as free travel insurance, access to exclusive airport lounges and first class upgrades on flights with certain airlines.

This might all have you wondering how exactly you get your hands on such a card and what the specific requirements are.  Well, nobody outside the company knows exactly.  You see, it’s invitation only and American Express has never released any official information about what criteria they use to decide who is eligible. This said, the rumour mill has it that if you really want an invitation for a Centurion Card there are three basic criteria you need to fill:

As for any overall wealth requirement, there’s currently no consensus on how wealthy you need to be to be eligible for the card, though a commonly quoted annual income is about $1.3 million minimum. This said, there are reportedly Centurion Card holders “who merely make mid-six-figure salaries”, so perhaps they use a flexible or weighted requirements system (presumably including net worth and credit score), rather than a more rigid one mostly based on income and spending habits.

What is more definitively known is that, once offered the card, you usually have to pay a joining fee, plus a rather hefty annual fee.  While it varies from country to country, for reference, in the United States it’s a $7,500 joining fee with a further annual charge of $2,500 for each card holder. While this is amazingly expensive, if one travels a lot, the perks of the card, including that virtual personal assistant, can very easily make it worth it.

So what can the lucky few who do own a Centurion Card buy with it? Well, to put it simply, anything they want. According to American Express executives, the card’s limit is effectively infinite and only bound by the holder’s individual wealth. To this end, the card’s actual limit is decided by a comprehensive analysis of the holder’s spending habits and net worth.

As for the most extravagant thing ever purchased using one, that is probably the Amedeo Modigliani painting Reclining Nude which was purchased by Chinese billionaire, Liu Yiqian, in 2015. The total cost?  $170 million… And, yes, he put it on his card.

This was actually the second time he’d used his card for such an expensive object around this time, previously paying $36 million for a tea cup that dated back to the Ming Dynasty.

As if being able to pay for a $170 million painting (among many other large purchases) with a an Amex wasn’t ridiculous enough, Yiqian has also earned perhaps the most charge card reward points of anyone in history, with his wife noting they had enough points to fly the family in luxury for free for the rest of their lives.  However, apparently one can also use the points to buy luxury items, such as a 26-carat diamond bracelet that goes for a mere 33 million rewards points…

Of course, the points weren’t the only reason he put the painting and other such expensive items on his charge card, instead of paying cash.  You see, China has restrictions on how much money an individual can transfer out of country per year at around the equivalent of $50,000. Needless to say, for a billionaire with expensive tastes, this is extremely restricting when wanting to buy something out of country. By using the card, it circumvents this restriction completely as his card was issued through the bank of China. So he’s paying them back, not sending money out of country himself.

Finally, if you’re now wondering if there is anything special about the physical card itself, I used to work in a champagne lounge at a racecourse and met a guy with a Centurion Card and got to handle it.  It is unusually heavy to handle, due to the fact that in most markets it’s made of anodized titanium, rather than plastic. When I asked what the most expensive thing the customer in question had ever bought with it, the man simply responded “a boat”.