The Spiteful End of the Great Auk 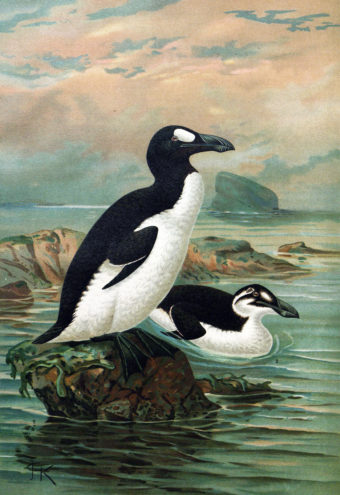 Humanity has collectively been responsible for a depressingly large amount of animals going extinct in our relatively short time on this Earth. However, perhaps no creature was wiped from the face of the planet for as silly a reason as the great auk.

Once endemic to the North Atlantic, the great auk was a flightless seabird not too dissimilar in appearance from a penguin. In fact, penguins (which were discovered after the great auk) are believed to have gotten their name from the great auk’s scientific name of Pinguinus impennis, due to an early (incorrect) belief the two birds must be related due to their appearance.

Moving swiftly on, at one point in time the North Atlantic was positively lousy with great auks, with the bird being found everywhere from the coasts of Great Britain to rocky inlets near Canada. As you can imagine, the sheer abundance of great auks in existence naturally made them a popular source of food for sailors who are said have hunted them in massive numbers.

Being a flightless bird more at home in the sea than on land, sailors found hunting great auks to be an almost comically simple affair since the bird’s awkward, ungainly waddle on land meant that they couldn’t exactly run away with any grace, let alone precision or speed.

The fact that great auks supposedly didn’t fear humans only made hunting them easier to the point where there are reports of sailors walking onto islands covered in great auks with a sack and casually picking up birds by the handful.

As early as the late 16th century, experts were made aware that the population of the bird in some areas had been near-totally decimated by hunters, and a number of protections were put in place to perhaps save the species from being completely wiped out. Said protections included whipping the living crap out of anyone caught stealing the eggs of the bird, which didn’t stop people from hunting them anyway because it’s not like the ocean was going to snitch on them.

By the early 1800s the bird was critically endangered to the point that some sailors believed it to be totally extinct, which ironically may have led to the bird’s ultimate demise.

You see, news of the bird’s rarity caused private collectors and museums to issue large bounties for surviving specimens for display. This, in turn, caused sailors to hunt the few remaining great auks in existence with a renewed zeal.

By the 1840s, the bird was all but extinct when the very last breeding pair ever seen in the wild killed by a trio of sailors called Jón Brandsson, Sigurður Ísleifsson and Ketill Ketilsson on an island off the coast of Iceland. The sailors, under orders from a merchant who wanted a pair of great auk pelts for display, found the birds nesting on a rock. Not wanting to startle them, by the point were understandably wary of humans, the trio snuck up under cover of night and literally strangled them both to death. Then, for no particular reason other than “screw the great auk” we guess, Ketilsson then stomped the birds’ nest a few times to destroy the egg they’d been incubating.

And if you didn’t think that was spiteful enough, we should probably point out here that almost exactly four years earlier from when the last breeding pair of great auks were killed, the last great auk ever seen in British waters was unceremoniously beaten to death with a stick by a bunch of superstitious sailors who thought it was a witch…