Willow T. asks – Is it true that you soil yourself when you die? 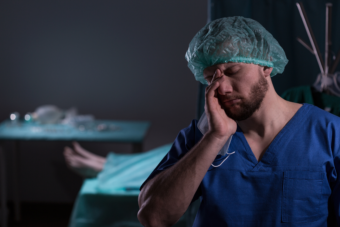 Depending on your current religious affiliation, at the moment of death a number of things may happen to your soul, from being judged by Anubis to being conscripted to kick an endless amount of ass for the glory of Odin in Valhalla. The things that happen to your body, however, are all together less metal. This brings us around to our viewers’ never ending quest to get the authorities investigating us for our search history- do people really poop their pants directly after death?

Enter mortician Caitlin Doughty. Said Doughty, “It depends on how much poop you have to give… I don’t have an exact scientific percentage of how many people poop when they die, but it does happen.”

Unfortunately, as far as we can find, nobody has ever done a scientific study on the frequency of pooping after death (and peeing, as it turns out, which also happens with some measure of frequency).

But in our quest to find reasonably authoritative figures anyway, even if anecdotal, we reached out to long time paramedic and co-host of the phenomenal and hilarious podcast Medical Confessions, Scott Hiskey. Scott, in turn, reached out to his many medic colleagues and is no doubt now destined for a meeting with HR for some sensitivity training and proper uses of work email.

So what was their consensus as to the frequency of pooping after death?

Universally, they almost all qualified their response with, “Depends on what they died from.” However, the general consensus among this sample-set was that people poop themselves somewhere between 20%-50% of the time either directly before or sometime after death. For a subset of direct quotes in response to the query, said Scott,

If someone just went to the bathroom prior to death…maybe not. If they have renal problems, probably not urine in their bladder. Should the cause of their death be anaphylaxis or an organophosphate poisoning then I’d say the number is way higher, like 80-90%. In the end this is something that happens often enough that we don’t really pay attention to it other than to advise everyone in the room “be careful, code brown” and then move on from there.

Oh God! I hate the poop! I’d say 80% because when it happens it sticks in my mind more. [But] if I’m being honest, probable around 50%, but I just pay attention so much I’m probably only remembering the times it happens. But really depends on the cause. I’d say if they have some sort of allergic reaction then I’m expecting it, or if they’re wearing a “Depends” then I’m just assuming it happened because they can’t control it anyway. In that case, don’t bother looking and let the coroner deal with it.

In yet another case the medic had a wife who is a nurse. Their consensus was:

It depends on why they died… I’d say if the cause [of death] was allergic reaction then probably gonna happen. But really depends on the cause, I’d say 20-30%.

So seemingly from these and several other responses, somewhere in the ballpark of a 20%-50% chance seems to be the consensus for pooping either directly before or sometime after death, though none of them have ever bothered to keep track. That said, with our posed question, there is some thought to discretely start tallying it over the next year or so to get a good sample size and then publish a legitimate study FOR SCIENCE!!!

This all brings us around to why this happens?

To begin with, despite there being a specific moment in which you might be considered to have expired from a legal standpoint, the process of your body as a whole dying takes a surprising amount of time, during which various parts of you continue to function to some extent. We’ll have much more on all of this in an upcoming article looking more broadly at what happens when you die, but, for now, it turns out that muscles retain a degree of functionality after death. In fact, some bodies are capable of displaying reflexive actions long after death depending on how exactly the person expired. While mostly limited to minor spasms and shudders, bodies have been known to kick and even sit bolt upright long after death under the right circumstances. And that’s not to mention the groans that can be exhibited which isn’t totally uncommon…

More pertinent to the topic at hand, biological processes such as digestion will continue on some level immediately after death.  For this, you can think of your digestive tract, that path between your mouth and your anus, as a system that is essentially outside of your body, just contained within it. Each different part breaks foods down differently.

But you probably already know all about that.

What you might not know is how the system of transport actually works. The body gets food through your long digestive tube via waves of muscle contractions, called peristalsis, that run a few inches at a time all down your digestive tract. These waves of muscle contractions also serve to mix and churn foods, liquids, and digestive juices together. The resulting cocktail is called chyme.

The contractions themselves are really not too dissimilar to how your heart beat works- fluctuation of electrical potential in the smooth muscle cells which causes the muscle to contract in a rhythmic fashion, in this case called the “Basic Electrical Rhythm” or BER. This rhythm is about 3 times per minute in the stomach, and around 12 times per minute in the small intestines. The sounds you sometimes hear when your stomach and intestines make noises are the result of these muscular contractions mixing and moving the chyme along, as well as pushing any resultant air through your system.

From your stomach, the chyme goes to the small intestine where most of the nutrients that come from our food get absorbed into the bloodstream by a process called diffusion. What is left over is then passed to the large intestine whose main job is the absorption of water that remains in the indigestible residue of food. A smaller role of the large intestine is also to break down polysaccharides (fiber) that gets passed into it.

This brings us to the literally trillions of microbes hanging out in your gut. They care not, at least initially, that you’ve shuffled off this mortal coil and continue doing their thing in the immediate aftermath of your death. Among other things, this may, in some cases, result in a significant amount of gas being formed.

For example, consider what happens when you consume oligosaccharides, such as are in beans. Oligosaccharides are basically sugar molecules that are made up of several different types of monosaccarides (usually 2-10) to form a polymer. An enzyme that would break these molecules down does not exist anywhere inside the human body naturally. But fret not, when they enter the large intestine, they serve as food for the countless microbes present. This is important for our health as these bacteria are necessary for creating different vitamins that get absorbed into the body as well as for the production of antibodies that help fight off certain types of infections. The downside is that the gaseous side effect of these bacterial processes tends to clear rooms everywhere.

And in the case of being dead, well… the gas has to go somewhere. Thus, bodies can sometimes not just belch, but also fart long after death- a fact that presumably gives morticians everywhere plausible deniability if they let one go at work.

Of course, farting isn’t necessarily pooping, though the occasional shart does happen, even after death. Helping this process along, simultaneous to death, while some muscles in your body may tense or spasm, potentially even long after you’ve died, the various sphincters of the human body will eventually relax. And if there’s anything backed up in said orifice, various muscular processes that may continue for a bit can more easily push stuff out, as well as potential gas build up over time having a similar effect. This is particularly likely with trauma or seizures that result in death which makes pooping and peeing either directly before or directly after death virtually guaranteed unless the person recently emptied their waste disposal factories.

Beyond this, something that can aid this after death pooping and peeing process is the movement of the body itself. While you might not have previously soiled yourself, depending on how your body was handled, and potentially combined with any gas present, it may result in a build up of abdominal pressure that squeezes the poop and pee out when you’re moved, not unlike squeezing toothpaste from a toothpaste tube- just, you know, less minty fresh.

So to conclude, while seemingly not as common as certain Hollywood depictions, such as South Park, might indicate, defecating after death does happen a not insignificant percentage of the time. Kind of fitting when you think about it. Likely the first thing you ever did when you entered the world was start consuming milk. And there is a reasonable chance that the last thing you’ll ever do is empty your bladder and colon of their contents.

Speaking of microbes in your abdomen, it turns out you can brew alcohol with some of them. Right in your body, in fact. Endogenous Ethanol production, or Auto-brewery Syndrome, was first described in medicine in 1972 in Japan. Very few cases are ever reported, presumably because the syndrome requires an unusual set of circumstances to cause noticeable symptoms. In all of the known cases, some type of yeast, such as Saccharomyces cerecisiae, ferments the sugars coming from carbohydrates or any sugary foods into ethanol (ethyl alcohol). Should enough ethanol be produced, you can even get drunk.

In fact, different types of yeast producing ethanol in our digestive tracts is very common. One study of people suspected of having auto-brewery syndrome showed 61% of people had an increase in their blood alcohol level when given oral glucose (sugar). Another study done in the United Arab Emirates showed that while this alcohol production was common, the production was “too low to have any forensic significance”.

Basically, people don’t complain because the amount of alcohol produced didn’t give them any symptoms. (Although, that same study noted that the average blood alcohol level of the participants was approximately .034%- almost half the legal limit to drive in most US states.)

This can particularly be a problem for people of Japanese descent. About 50% of Japanese people have a mutated gene that leaves the liver unable to properly filter alcohol. The result leads to these people being unable to quickly get rid of the alcohol in their system, which in turn means they also remain drunk longer. So, essentially, smaller amounts of alcohol produced over time build up to make them drunk where others’ bodies might simply be able to filter out the alcohol quick enough that no noticeable symptoms occur.

Of course, fully fledged Auto-brewery syndrome causing noticeable symptoms in people is very rare and usually takes something in your body not functioning quite correctly to occur. For example, consider the case of one Texas man who, during treatment for an infection, was given copious amounts of antibiotics and then directly after had brewers yeast more or less take over his gut before other microbes could firmly establish. The result was a perpetually drunken Texan who wasn’t actually drinking. Eventually doctors figured out what the problem was and easily fixed it in his case.