To Boldly Go Where No Fecal Matter Has Gone Before 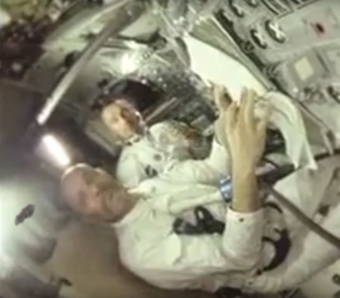 Officially the Apollo 10 mission of 1969 was a dress rehearsal for the more famous Apollo 11- designed to test all of procedures and equipment needed to land on the Moon save for the actual act of the landing itself. (To assure it was just a practice run, they did not put enough fuel in the LM to land and leave the Moon. They felt that if they did, Thomas Stafford and Eugene Cernan might just decide to go for it. Interestingly, Cernan and Stafford almost were the first to land on the Moon anyway, as the crew mistakenly put duplicate commands into the flight computer and, upon the ascent engine ignition, the LM started spinning nearly out of control because of it. They only regained control of the craft a few revolutions away from the situation being unrecoverable, which ultimately would have seen them crashing onto the Moon.)

While many of the mission’s details have been overshadowed by the later Apollo 11 mission, one in particular still stands out- that time a couple pieces of fecal matter free-floated around the command module for several minutes.

This scatological tidbit from the history of space exploration occurred on the sixth day of the Apollo 10 mission as they were orbiting the Moon. As recorded in official NASA transcripts of the mission, the first incident was initially noticed by Commander Tom Stafford. The other two aboard were John Young and the aforementioned Eugene Cernan, both of whom would later walk on the surface of the Moon as part of the Apollo 16 and 17 missions respectively. (While Commander Stafford never walked on the Moon, he is the joint record holder for the highest speed ever attained by man, relative to Earth, when the Apollo 10 craft reached 24,791 miles per hour.)

As noted, Commander Stafford noticed the floating feces first, alerting his crewmates to its presence by exclaiming “Oh” quickly followed by a bemused, “Who did it?” According to the official transcripts of the mission, the next crew member to notice the flying, fibre-rich projectile was Young, who let out a “Where did that come from?” as the fecal matter floated slowly into his eye-line. Cernan apparently didn’t notice the poop until it was explicitly identified by Stafford who alerted both him and ground control to its existence by saying quite matter of factly:

Give me a napkin quick. There’s a turd floating through the air!

The transcript further went on to reveal that Stafford and the rest of the crew were stifling laughter throughout this exchange, with several portions of said transcript detailing that the turd invasion was punctuated by fits of laughter and giggling unable to be credited to a singular member of the crew. After some playful banter, Cernan heroically, and with no regard for his personal safety, decided to dispose of the so-named turd with a nearby plastic bag.

Shortly after normal mission tasks resumed, the trio were interrupted by a second bit of fecal matter floating listlessly through the air, prompting yet another sweeping round of denial from each astronaut, with Stafford insisting that his poop was stickier than the one currently enjoying its interstellar freedom. Young likewise asserted that his poop “hit that bag”. The “bag” in this context referred to the decidedly low-tech way astronauts had to deal with feces back then and the reason why said astronauts seemed to know in detail how “sticky” their rear expulsions were. 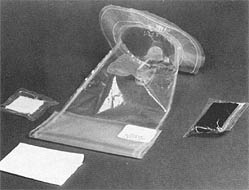 As we’ve talked about before, (see: How do Astronauts Go to Bathroom in Space), doing one’s necessaries in space has been an issue almost since the dawn of space travel. For instance, on the morning of May 5, 1961, astronaut Alan Shepard, the second man / first American in space, was forced to sit through several hours of delays on what was otherwise supposed to be a very brief mission. He ultimately remarked, “Man, I gotta pee.”

With no good options available, he was at first implored to “hold it”. Eventually things became critical and it was decided that Shepard should pee in his spacesuit after its electronics were temporarily deactivated with the hope that his peeing in the suit wouldn’t short out his bio-sensors and give him a jolt in the process.  The hack was mostly successful in that he didn’t electrocute himself and he no longer had to pee, but it did ultimately short the sensors.

Today, most astronaut waste is handled by a remarkably sophisticated space-toilet that simply vacuums things up. Back in the late 1960s though, astronauts didn’t have this luxury and had to poop into what basically amounted to a plastic bag taped to their butts.

The exact procedure for pooping in space at the time, as outlined in the Apollo Experience Report – Crew Provisions and Equipment Subsystem published by NASA in March of 1972, was as follows:

To use the FCA (Fecal-Collection Assembly), the crewman attaches the outer fecal bag properly and proceeds with fecal elimination. Upon completion of the action and subsequent sanitary cleansing, the tissues and refuse are placed in the inner fecal/emesis bag.  The crewman then removes the germicide pouch, cuts the outer protective seal, and places it in the inner bag.  Finally, all items are placed into the outer fecal bag, the bag is sealed, the germicide pouch is ruptured by hand pressure, the bag is kneaded, and the contents are stowed in the waste-stowage compartment…. Nothing has proved more effective than the current system, which has proved adequate for all flights, although the crewmen have expressed dislike for it.

If you’re wondering, the germicide pouch was there to kill off as many microbes as possible to reduce the likelihood of microbial produced gases swelling the bag to the point of bursting. However, NASA wasn’t content to assume no bags would turn into fecal grenades, so they planned for that contingency as well, as noted in the report:

If any fecal bags were to rupture during the mission, the waste-stowage compartment could emit fecal odors. Therefore, a bladder and an overboard vent system have been placed in the compartment.  The system contains a 215-micron filter, a check-relief valve, and a vent valve to the urine overboard dump line. During boost, the waste-stowage vent valve is opened to purge nitrogen wastes from the crew compartment. A check valve vents into the crew compartment at differential pressure of 2 psi. After the vent valve has been closed during a mission, the check valve vents if ruptured fecal bags create a pressure of 2 psi. Then the crewman, alerted by the fecal odor, can position the waste-stowage valve to vent the odor overboard at periodic intervals.

Not perhaps planning enough for human error, by some unknown means some of the poop escaped its plastic prison during Apollo 10, leaving it free to wander around the command module, boldly going where no turd had gone before.

So who let free the smelly projectiles? Despite extensive research into the matter FOR SCIENCE, unfortunately who the poop belonged to cannot be conclusively established. All three members of the crew at one point or another denied that the fecal matter in question was theirs during the immediate aftermath, with the most adamant among them being Stafford, who, as mentioned, deflected accusations away from himself by claiming that his expulsions were “more sticky” than the ones currently invading their space- a bold but otherwise fine tactic in the Who Smelt It, Dealt It game.

That said, in an effort to leave no stone unturned to find out who the culprit was, we read through the 171 pages of NASA’s transcript of day six of the Apollo 10 mission and found a few clues.

We know that earlier that same day Cernan and Stafford talked about going to the bathroom, but Young did not, at least as far as we can find.  However, during the second turd incident, Young did note in response to one of Stafford’s assertions that “Mine was stickier than that…”, “Mine was too. It hit the bag…”  So we can deduce from this that Young did indeed recently defecate, but likewise asserted that his stuck to the bag. If we are to believe both Young and Stafford in this, it would seem to rule them out.

A little more evidence in the finger pointing at Cernan is that he noted after going to the bathroom that he couldn’t smell a thing, suggesting that he’d just gone the big #2 and, at least as far as the transcript reveals, was the last person to poop before Turdgate and Turdgate 2: The Reckoning. (Of course, when exactly Young went to the bathroom is undocumented, so Young going last can’t be wholly ruled out.) The fact that Cernan’s expulsions weren’t smelly also is a small strike against him, with presumably more stinky fecal bits escaping the bag being more immediately noticeable than the springtime fresh variety.

It’s also noted that during the second incident, while Cernan did state, “Here’s another godd*&m turd. What’s the matter with you guys?” implying he thought one of the other two was to blame, both of the others subsequently pointed out the sticky nature of their defecations. In response to this, Cernan then backtracked a little, stating, “I don’t know whose that is. I can neither claim it nor disclaim it.” He then laughed.

Unfortunately the transcript does not give adequate detail of the laugh.  Was it perhaps a nervous chuckle, with him knowing deep down he was guilty?  Or was it a general guffaw at the absurdity of it all- three humans floating around over two hundred thousand miles from Earth in one of the most expensive and advanced pieces of engineering ever constructed, orbiting the Moon while their own fecal matter more or less orbited them.

Further research into the solid rear emissions of the trio, such as the Apollo mission fecal sample mass measurements, were unhelpful in potentially identifying the culprit.

While none of this provides definitive proof by any means, based on the scant evidence we have to go on, it would seem Cernan is the most likely source of the offending fecal matter. Of course, Stafford was the discoverer of the first turd and we can only wonder whether the “first smeller is the feller” rule extends to such circumstances as visually spotting solid waste in space.  He also was the first, and most adamant, to deny it could have been him. Doth protest too much? On the other hand, Young’s fecal emissions were decidedly absent from the transcript logs that fateful day. Was there tampering to protect one of NASA’s most accomplished astronauts?

If nothing else, we hope you agree that this qualifies as a “fun fact” you can use to inject yourself into conversation circles at cocktail parties in order to avoid having to be that person who awkwardly hovers just outside of said circles. Arming oneself to avoid such a circumstance is half the point of Today I Found Out, after all.