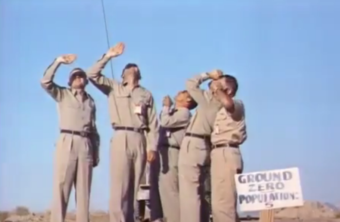 Unless there is a lead-lined refrigerator lying around, we’re guessing none of you reading this would be too keen on standing at ground zero of a nuclear blast. But it turns out this is exactly what six men chose to do with their afternoon in July of 1957- five of them even volunteered, with the sixth not told what he’d be ordered to do that day until he showed up to work… So who were these men, why were they there, and what happened after?

As the Cold War began heating up and the U.S. and Soviets were each attempting to set a record for money spent stock piling thousands of weapons not intended to be used, the general public were getting a little nervous about both the testing of said weapons and what would happen if one of the two super powers decided to take things to the next level, particularly as rockets and missiles tipped with nukes started to become a thing. Despite assertions that there was nothing inherently dangerous about a rocket with a nuclear warhead detonating directly above you, the citizens of the United States weren’t buying it.

Putting their money where their mouths were, Colonel Arthur Oldfield of the Continental Air Defense Command decided to prove the assertion, ordering to have just this sort of thing filmed happening. This particular test, named John, was a part of the five month long Operation Plumbbob series of nuclear tests.

Besides the men involved with John, these tests also included over 18,000 other members of the military being put in relatively close proximity to nuclear blasts, with the point being to determine how troops would react in battle with nukes detonating nearby. The tests also included over a thousand pigs being used to study the biological effects of the detonations when the subjects were much closer to the blasts than officials were comfortable putting humans. (Squeal piggy!!!)

The five men who volunteered to insert themselves into John were Colonel Sidney Bruce, Lt. Colonel Frank P. Ball, Major Norman “Bodie” Bodinger, Major John Hughes, and Colonel Donald Lutrell. The sixth individual was a cameraman named Akira “George” Yoshitake- simultaneously the only one who did not volunteer for the gig and the only one who had a job to do during the blast. His job, of course, was to capture the entire event for a nice little propaganda film to demonstrate that these nuclear tipped rockets were perfectly safe to use in air combat scenarios above populated regions.

And so it was that on July 19, 1957, the five exceptionally brave men and one cameraman, no doubt re-evaluating his career choices and decision making paradigm, found themselves standing around 70 miles northwest of Las Vegas as the crow flies, or about 100 miles by road, in the Yucca Flats in the Area 10 Test Site. Next to them was a sign that read “Ground Zero. Population 5”, casually disregarding the key contributions of Yoshitake, which has been a theme for the few hundred filmmakers who were so critical to these nuclear tests and data gathering, yet have been largely ignored by history.

Soon enough an F-89 jet flew overhead, shooting a Genie rocket equipped with a 1.5 kiloton W25 nuclear warhead. This was actually the first test of a live nuclear tipped Genie rocket, but, thankfully for the men, the unguided rocket did not malfunction and instead flew straight for about two and a half miles at a height of around Flight Level 180 (about 18,000 feet or about 5.5 km). It then detonated almost directly above them.

Said Major Bodey as it happened, “We felt a heat pulse. A very bright light. A fireball it is red. The sky looks black about it. It is boiling above us. It is rapidly losing its color…”

Then a massive blast sound could be heard, at which point Bodey stated, “There is the ground wave! It is over folks, It happened! The mounds are vibrating. It is tremendous! Directly above our heads! It is a huge fireball. … Wasn’t that a perfect, perfect shot.”

Seemingly remembering the whole thing was to be a propaganda film showing it was just good family fun to stand under a nuclear blast, Colonel Bruce then stated, “My only regrets right now are that everyone couldn’t have been out here at ground zero with us.” Shortly thereafter he no doubt thanked the Academy and noted he felt humbled to be there.

You might at this point be thinking that while the blast itself didn’t do them any harm, other than maybe a stubborn case of tinnitus- the little talked about silent killer associated with nuclear blasts- surely these men must have been exposed to copious amounts of ionizing radiation. But this turns out not to have been the case. It was later determined they were exposed to negligible amounts of such radiation. In fact, less than the pilot of the F-89 jet and significantly less than the pilots ordered to fly through the region of atmosphere the blast occurred at a mere ten minutes later.

Ironically, however, while the whole thing was meant to show the safety of such nuclear rockets detonating high over head, radioactive particles from these tests frequently settled on nearby towns, even as far away as Utah.  As you might expect from this, the U.S. government has paid a pretty penny, to the tune of around a billion dollars to date, to the inhabitants of these regions who later had health problems possibly related to being exposed to high amounts of ionizing radiation during the tests.

All this said, it is noted that every one of these six brave men did later in life get cancer at one point or another. However, it’s not thought this test in particularly probably contributed much to that. All of them were involved in a number of nuclear tests, many of which saw them exposed to far more ionizing radiation, with the cumulative effect of it all probably also not helping matters.

In the end, Major Hughes lived to the age of 71, dying of cancer in 1990. Lt. Col. Ball lived until 2003, dying at the ripe old age of 83 of cancer. Colonel Bruce actually made it to 86, dying in 2005 of, you guessed it, cancer. Major Bodinger also died of cancer, we believe in February of 1997, though it’s not clear here as his grave is not listed in the U.S. Department of Veteran Affairs grave site locator. But we found a grave in Oklahoma for someone that appears to match up with what we know about Bodie. Next up, Colonel Lutrell at one point got colon cancer, though it isn’t clear whether this is what he died of. Whatever the case, he seems to have shuffled off this mortal coil in 2014 at the age of 91. As for the cameraman George Yoshitake, while he did have to battle stomach cancer to do it, he lived to 84, dying in 2013 of a stroke.