June 28, 2018 Matt Blitz
Nathan K. asks: How did Pomp and Circumstance get to be the tune always played at graduations? 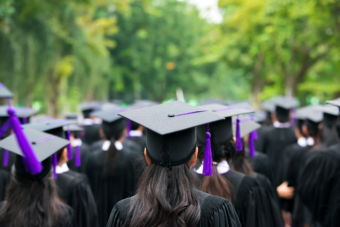 Every year, hundreds of thousands of students march across a stage in a gown and a squared hat to receive a piece of paper that says they’ve completed a particular phase in their education. This school graduation will undoubtedly be marked by cheering, proud adults, and, particularly in North America, the playing of the seminal marching tune “Pomp and Circumstance March No. 1.” So, why is Pomp and Circumstance played at seemingly every graduation?

We should probably kick things off by discussing the name itself- “pomp and circumstance” simply is a phrase for a ceremony or display of splendor or stateliness. It comes from the Latin “pompa,” meaning “procession,” and “circumstantia,” meaning “standing around.” A procession of standing around doesn’t make much sense until one follows the evolution of the meaning “circumstantia.” In the 13th century, the word was used in reference to “a particular detail, matter of small consequence.” But a century later, in the 1300s, somehow it literally reversed its meaning to be defined as “something of great importance or accomplishment.”

Like so many other phrases, the credit for the first to coin this one is generally given to William Shakespeare, though in many cases it is thought he was just using existing phrases that we simply don’t have earlier surviving examples of today. Whatever the case, in Act 3, Scene 3 of his 1604 play “Othello,” the title character notes

Farewell the neighing steed and the shrill trump,
The spirit-stirring drum, th’ear-piercing fife,
The royal banner, and all quality,
Pride, pomp, and circumstance of glorious war!

From there, the phrase seemed to take on an almost sarcastic quality, often used as a way to make fun or point to the belief that someone or something thinks of themselves as overly important.

Flash forward three centuries later, in 1901, one Edward Elgar had already made a name for himself as one of the premier English musical composers of his day. Despite this, as so many musicians and artists before him, Elgar was struggling financially, unable to translate critically-acclaimed works into money-making successes.

Knowing that people love a good military march, he composed two (of what would end up being five) marches that he called “Pomp and Circumstance,” pulling the title from the line in Othello.

As for the most famous of these, March No. 1, legend has it that Elgar told a friend, Dora Penny, that “I’ve got a tune that will knock ’em – knock ’em flat! … a tune like that comes once in a lifetime.” Whether he actually said this or not, “Pomp and Circumstance” March No. 1 in D was first performed on October 19, 1901 by the Liverpool Orchestral Society. This debut performance was reportedly met with a standing ovation, which was nothing compared to when it was played three days later in London.

After the first go-around, the ecstatic audience would not let the rest of the concert go on until the tune was played two more times. (And, note, this sort of non-passive audience used to be the norm, even during symphonies, contrary to what generally happens at such events today, see: Has There Ever Been an Actual Case of Someone Being Pelted With Tomatoes During a Performance?)

This event was, according to the London performance’s conductor, Henry J. Wood, the first time in that particular theater’s history that a double encore was ever done.

In November of that year, Elgar was approached by famed English contralto Clara Butt who asked him to compose a finale for her performance with a full chorus at the crowning of King Edward VII later that summer.

Sparing himself extra work, Elgar used the very same march he’d composed that was such a hit. He did add lyrics to it, thanks to poet Arthur Christopher Benson. Called “Land of Hope and Glory,” Benson’s lyrics extol the virtues of the British crown and empire. The march, coupled with lyrics and Butt singing, was all set to premiere on June 30th at King Edward VII’s coronation, but the king fell ill and the ceremony was delayed until August 9th.

In meantime, Elgar put together four more marches and produced sellable versions of them. By August, he was already making good money off this. When it was finally played at the coronation of the new King and Queen, Elgar was on his way to finally making his fortune.

Thanks to the music’s prominence in the coronation, Elgar became internationally famous. Fairly quickly, in part because of its use at the coronation of the King and Queen, the march became immensely popular with American orchestras, particularly played with great frequency in Chicago.

Coming back around to why Pomp and Circumstance is played during graduation ceremonies, in 1905, Elgar was invited to the United States by a friend, Professor of Music Samuel Sanford, to receive an honorary degree from Yale University. Hailed as “England’s foremost musician,” he outshone the 12 others who were also receiving honorary degrees from the revered American university that day.

Upon completion of the ceremony, the entire group left the stage to the tune of “Pomp and Circumstance March No. 1” in honor of Elgar. This is the first known time that the tune was played at a school graduation.

The uplifting song was noted by other colleges and played at graduations, including at Princeton in 1907 and University of Chicago in 1908.

According to the Elgar Research Center, it was the 1920s when “Pomp and Circumstance” became the norm at college graduations across the United States, though it’s unclear when it shifted from being a recessional to a processional (entering) song.

Today, the lyrical version of the march (Land of Hope and Glory) is one of England’s most famous songs, even considered by some to be something of a second national anthem. In the United States, the march – sans lyrics – is also played thousands of times a year while students march down the aisles in anticipation of receiving their diplomas.