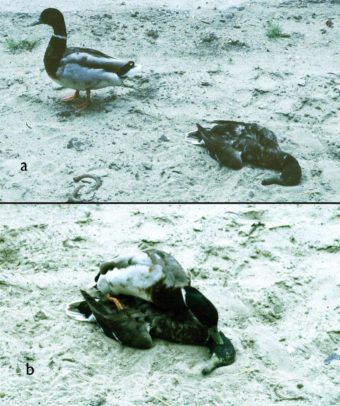 On June 5, 1995 at approximately 5:55 PM, a male mallard collided with the glass facade of a wing of the Natural History Museum in Rotterdam, Holland, resulting in its death. Within moments of the dead duck hitting the floor, the unfortunate bird was then mounted by another, much more alive duck who proceeded to have vigorous intercourse with it for a reported 75 minutes before being forced away from the dead mallard…

Observing this bizarre scene was one Kees Moeliker, at the time an educational assistant at the museum, but today its director. Naturally, he grabbed his camera to document the male on male dead duck lovin’ FOR SCIENCE!!!

Now, the first question that probably springs to mind is just the word “WHY” in massive mind-letters… so allow us to explain. Male ducks are incredibly sexually aggressive creatures. This fact, in combination with female ducks tending to be extremely picky about who they’ll willing mate with, results in a considerable amount of duck sex ending up being rape. Over time, this has resulted in the female duck’s reproductive tracts developing random twists and turns with dead-ends along the path in an attempt to not actually have the raping duck’s sperm fertilize anything.

In conjunction with this, the male duck’s penises have evolved into a relatively long, sometimes spiny, corkscrew like shape to try to fertilize some eggs anyway. On the extreme end, the Argentine Lake Duck actually has a penis length that is sometimes as long as the entire length of their body at around 16-17 inches. Why the need for such a long, corkscrewed appendage? Researchers at the University of Alaska state, “Our best guess is that the birds use [the long penis] as a kind of lasso… The males have to chase the females, and even during copulation the females are trying to escape.”

In any event, Moeliker himself would later note in an aptly titled paper, The first case of homosexual necrophilia in the mallard, “After the breakup of the pairs (from mid March onwards), when the drakes congregate in small flocks, more than a dozen may chase a single female in the air, trying to force her down and rape her…”

Occasionally, once the female weakens enough to be forced down, this results in the flock of male ducks gang raping the female duck, sometimes even to death…

It’s noteworthy here that the females seem to be in some sense winning the evolutionary battle on this front though, as the majority of forced mating instances in ducks don’t seem to result in fertilization, unlike when the female finds the perfect mate and is actually willing.

Going back to the dead duck rape, Moeliker hypothesizes that the two ducks were probably engaged in a similar chase when the male duck that was attempting to flee the rapist duck collided with the window and died.

On that note, he states the living duck

forcibly picked into the back, the base of the bill and mostly into the back of the head of the dead mallard for about two minutes, then mounted the corpse and started to copulate, with great force, almost continuously picking the side of the head… He dismounted only twice, stayed near the dead duck and picked the neck and the side of the head before mounting again. The first break lasted three minutes and the second break lasted less than a minute.

Finally after 75 minutes, Moeliker stated, “I had seen enough.” “Disturbed the cruel scene” he went to collect the dead duck. Even then, he states,

The necrophilic mallard only reluctantly left his mate: when I had approached him to about five metres, he did not fly away but simply walked off a few metres, weakly uttering series of two-note ‘raeb-raeb’ calls… I secured the dead duck and left the museum… The mallard was still present at the site, calling ‘raeb-raeb’ and apparently looking for his victim (who, by then, was in the freezer).

As previously stated, Moeliker eventually collated his findings in his paper, The first case of homosexual necrophilia in the mallard, that understandably caused quite a stir amongst seasoned bird-nerds. In addition to being endlessly cited by his peers, the paper saw Moeliker invited to give a TED talk about the event and how it changed his life, and even won him an Ig Nobel prize, a tongue-in-cheek but nonetheless coveted scientific award handed out to select researchers for scientific “achievements that first make people laugh and then make them think”.

Among other of our favorite researchers who won this award was the team from the University of New Mexico who, FOR SCIENCE, went to strip clubs and recruited 18 ladies to record their work hours and earnings. The result? After a sample size of over 5,000 lap dances in 60 days, it turned out that strippers who had normal menstrual cycles earned almost twice as much per hour in tips when ovulating compared to when menstruating, with the other times in their cycle earning roughly in between the two figures. Just as interesting, strippers who were taking contraceptive pills did not show any such significant variance in their tips.

In another fascinating Ig Nobel Prize winning study, researchers at Auburn University in Alabama and Wayne State University in Michigan discovered that people who regularly listen to country music are significantly more likely to commit suicide…

In any event, since 1995, in honor of the duck that so courageously gave its life to let the world know its kind didn’t mind having forced gay sex with their own dead, Moeliker holds an informal memorial service on the anniversary of the fateful moment the duck collided with the museum.

At each so called Dead Duck Day, the guest of honor is usually the original dead duck itself, which Moeliker had stuffed and put on display in the museum. After displaying the duck to the crowd, Moeliker then talks about the event briefly. Next up, he discusses various bizarre instances of animal behavior that took place in the previous year, reads a message from a prominent scientist related to the event, then finishes up by discussing ideas about how to reduce instances of birds colliding with windows.

After all this, which generally takes about 15 minutes, the gathered crowd is invited to attend a meal at a nearby Chinese restaurant for a six-course duck dinner. Attendance at this event has been growing in recent years, with 2017 seeing nearly a hundred people show up, meaning a lot more dead ducks are needed to feed the teaming masses.

Also included in the 2017 ceremony was the much anticipated sequel to the Dead Duck event- the second account of homosexual necrophilia in the mallard, which occurred that year.  Moeliker quipped of this, “people have been waiting for this for 22 years.”

For those who want to pay their respects to the duck at other times of the year, in 2013 a small “splatter-shaped” memorial was also placed at the exact location the duck hit the building’s facade, below which is a plaque detailing its fate and its later value as a scientific curiosity.

Beyond all this, in 2014 an aptly titled opera, The Homosexual Necrophiliac Duck Opera, depicting the event was composed by one Daniel Gillingwater, with Moeliker himself getting to perform the duck call in the premiere at Imperial College London.