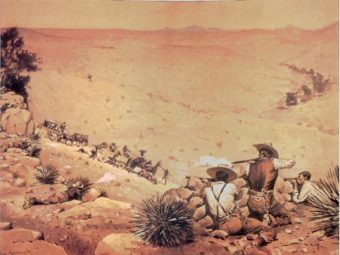 The story behind what came to be known as the Wham Paymaster robbery began on the morning of May 11, 1889 when a U.S. Army paymaster called Major Joseph Washington Wham was charged with transporting a lockbox containing the salaries of several hundred soldiers across the Arizona desert from Fort Grant to Fort Thomas located some 50 miles away. All in all the lockbox contained $28,345.10 in gold and silver coins worth the equivalent of about $784,000 today.

Tasked with protecting the contents of the lockbox, Paymaster Wham’s convoy included 9 Buffalo Soldiers of the 24th Infantry and two privates of the 10th Cavalry. At this point it’s probably worth mentioning for anyone unfamiliar with the term “Buffalo Soldiers” that all of the soldiers protecting Wham and his convoy were black.

This is important as a few hours after setting off the convoy was attacked by as many as 20 bandits who shot at the convoy while screaming racial slurs at the soldiers guarding it. More particularly, it’s thought that one of the ways those who robbed the convoy justified it from a moral standpoint was simply that it was no real crime in their minds to take money from black soldiers. (More on this in a bit.)

Whatever the case, during the ensuing 30 minute firefight, 8 of the soldiers guarding the convoy were shot, two of them multiple times. Of note are the actions of one Sergeant Benjamin Brown who shrugged off a bullet wound to the gut to stand out in the open firing at the bandits with his trusty revolver.

After being shot twice more (once through each arm), a fellow soldier braved the bullets to carry Brown to safety. Unwilling to halt his one-man assault, Brown continued firing on the bandits while being carried away.

Another Buffalo Soldier, Corporal Isaiah Mayes, similarly ignored the hailstorm of bullets, two of which hit him in the legs, to quite literally at times crawl to get help two miles away at a nearby ranch.

Unfortunately, with nearly everyone in the convoy seriously injured, they were forced to retreat away from the wagons, at which point heavy gun fire kept them pinned down while some of the bandits ran in, used an axe to open the lockbox, and stole the contents.

While the bandits succeeded in their goal, Paymaster Wham was astounded by the bravery of the soldiers (all of whom miraculously survived despite many being shot as noted). In fact, according to one of the witnesses to the event, Harriet Holladay, Sergeant Brown “had a bullet hole clean through his middle but he acted as if it didn’t bother him at all.”

Because of their uncanny bravery and dedication to protecting government property with their own lives, Wham immediately recommend 9 of the Buffalo soldiers for the Medal of Honor. Both Brown and Mayes were subsequently awarded that medal, while 8 other soldiers Wham singled out for their bravery were instead awarded certificates of merit.

As for the money, nobody is exactly sure what happened to it because nobody was ever convicted of the crime in question, despite that many among the robbers were recognized during the gunfight as they brazenly did not wear masks. It’s speculated that they didn’t bother with masks because they felt morally justified in the robbery and were all upstanding, church-going members of a nearby town, Pima, with the robbery seemingly organized by the mayor himself, Gilbert Webb.

As to why he and others in the extremely religious town thought this was a perfectly moral thing to do, well, the town was largely made up of Mormons who felt very strongly (and not really unjustified in this case) that the U.S. government had been oppressing them for years, and so taking money from Uncle Sam was no real crime.

On top of this, the individuals guarding the money were all black outside of Wham, as were many of the soldiers that were to be the recipients of the money once it was delivered. Thus in their view, to quote a contemporary article written on subject during the aftermath about the general sentiment of some in the town, “The n**ger soldiers would just waste the money on liquor, gambling, and whores, so why not take it and use it to the benefit of a community that really needed some cash…”

And so it was that when seven suspected members of the robbers were tried for the robbery, community members were seemingly stepping over themselves to give them an alibi (with 165 witnesses testifying in all).

On top of that, the original judge, William H. Barnes, had to be removed from the case when it was discovered he was not only a friend of one of the accused, but also was actively intimidating witnesses for the prosecution. This all ultimately resulted in U.S. President Benjamin Harrison himself stepping in and appointing a new judge, Richard E. Sloan.

In the end, despite many of those called in defense of the robbers completely contradicting themselves, eye witness testimony identifying a few of the men, and that some of them, including Mayor Gilbert Webb, were found in possession of stolen gold coins, all were ultimately acquitted for the crime. Deputy William Breakenridge summed up the reason- “the Government had a good case against them, but they had too many friends willing to swear to an alibi, and there were too many on the jury who thought it no harm to rob the Government.”

It should be noted, however, that several of the accused, including Mayor Webb, would later in their lives be convicted of other theft-related crimes, including Webb having to flee town when he was indicted for stealing $160 ($4400 today) from the Pima school district. (We should also probably mention that Webb actually left his former home in Utah to settle in Pima because he was under charges for grand larceny…)

In the years that have passed since the famed robbery, numerous legends have arisen about where exactly the money ended up, including several that posit that the money is still buried somewhere out there in the Arizona desert. However, given none of those who committed the robbery were convicted and it would seem much of the money was used by Mayor Webb to pay off debts around town, as well as forgive the debts of some of the men who helped him in the robbery, this seems extremely unlikely.