Will Hospitals Give Back an Amputated Limb if You Ask For It?

January 23, 2018 Karl Smallwood
Ron G. asks: Your donating bodies to science article left me wondering. What do hospitals do with limbs of people they amputate? Like, if I have a limb amputated, can I ask for it back? 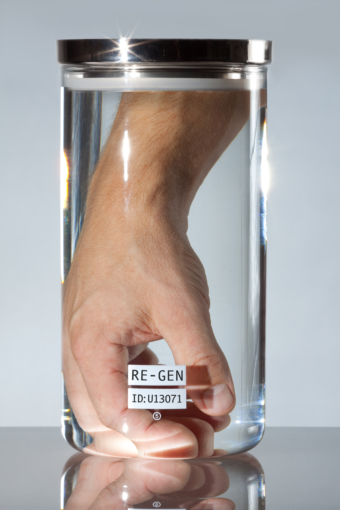 It’s standard procedure in most hospitals to incinerate any limbs, organs or tissue they remove from a non-organ donor patient. However, just because this is the way things are normally done, it’s not necessarily the way it has to be done. For example, while there almost universally doesn’t seem to be any laws saying you have rights to an amputated limb after a doctor removes it, in many cases you can ask for anything cut off of or removed from your body back from the hospital and they’ll (usually) say yes if pressed on the matter.

Even where laws exist, they tend to be less about how to handle such tissue and more about getting around potential lawsuits. For example, in California there is a law stating that patients can’t sue after the fact for the return of tissue used in medical research or for a share of the profits if the tissue removed leads to a medical breakthrough. (See Bonus Fact below on the fascinating case of John Moore which spurred this California Supreme Court ruling.)

That said, in part because of Moore’s case, prior to any surgery hospital representatives will invariably ask patients to sign a form that “cedes ownership of their surgical leavings”, usually to the pathology lab for use in medical research or study. However, as a patient, you’re entirely within your rights to not sign such a form and request ownership of any piece of your body removed during surgery. But, as previously alluded to, hospitals and doctors won’t always make this easy for you and will often tell you that this isn’t possible owing to the removed bits being a biohazard.

While this sounds like a reasonable explanation, in truth this is usually just something hospital representative say when a hospital has a policy against returning removed bits, generally from wanting to avoid jumping through the additional effort involved in returning a body part. As lawyer and author of The Law of Human Remains, Tanya Mash, notes, “When they don’t want to do something, they’ll tell people it’s illegal. That doesn’t mean it’s illegal. A lot of people just cave when they’re told it’s not permitted.”

Or, as PBS succinctly states, unless a piece of removed tissue contains a communicable disease or a virus, “keeping your own body part isn’t inherently anymore dangerous than keeping a steak”. And even if you have a communicable disease, the common process of preserving the tissue or limb (submersed in a solution of water and formaldehyde) will usually kill off any such diseases anyway outside of some known exceptions, making the often claimed “biohazard” excuse for not returning your body part generally bogus.

For example, consider the case of Kristi Loyall who, upon being told that she needed to have a foot amputated owing to cancer, asked the hospital for it back only to be stonewalled by doctors who told her that this wasn’t possible. Nevertheless, she insisted and, after hounding the hospital about the issue for several weeks, they agreed to return it. It’s also noteworthy here that while they initially said it wasn’t possible, the hospital actually had a liability release form on file specifically for use when returning removed body parts.

After signing the form and getting her foot and part of her leg back, Loyall paid $650 to a private company to skeletonise it. Hilariously, she maintains an Instagram account, onefootwanderer, where she takes various photos with said foot, such as this glorious shot of her using her skeletonised foot as a golf club.

When asked if she had any advice for people who similarly wanted to keep an amputated limb, Loyall explained that it was important to be persistent and “just keep reminding everyone that you are getting it back”.

As for exactly what condition you’ll get your limb, organ or tissue back in, this will usually depend on the tests the pathologist conducts on it and the manner in which it is removed. Things like kidneys stones, for example, will normally be destroyed by the tests performed on them after the fact, if not the method used to remove them in the first place. Because of this, while you can theoretically ask for anything removed from your body back, occasionally this really won’t be possible.

But where possible and if you insist, the general process is that the organ, tissue or limb will be sent off to a pathology lab, among other things to ensure it’s pathogen free. It will also be preserved in some way (usually, as mentioned, in a solution including formaldehyde) and you will have to sign a liability release form before it will be returned. Once back in your possession, in most regions, you’re free to do with it as you please. One man, Leo Bonten, even created a rather fetching, if a little creepy, lamp out of his leg.

If you happen to be interested in selling your former body part, as we mentioned in our article concerning how one goes about donating your body to science and the fascinating things that may be done to it after, with a few exceptions, this is entirely within your rights as there aren’t really much in the way of regulations in the United States and many other countries about the ownership or sale of human remains. The exception to this in the U.S. is primarily regarding the sale or ownership of Native American remains, which are protected by The Native American Graves Protection and Repatriation Act. (Although a few states, like Louisiana, Georgia, and Missouri, do have some laws pertaining to restricting selling body parts.)

Over in the United Kingdom, things are only slightly different with the decision of what to do with amputated limbs and removed tissue being left to the discretion of hospital trusts and, in some cases, the individual surgeon performing the amputation itself. However, as long as a patient makes their wishes clear and signs the necessary forms, in most cases one shouldn’t have significant issue getting the bit(s) of yourself back. Also, as in the United States, tests need to be performed to ensure the tissue or limb doesn’t pose a public health risk and it will need to be properly preserved before being returned.

One thing that is different in the UK is that, due to a quirk of British law, one of the few things a patient can’t do with an amputated limb once they get it back is have it cremated at a licensed crematorium. This is primarily because a death certificate is required by law for someone at a crematorium to cremate human remains, as noted in a paper published in the BMJ (formerly British Medical Journal). In the paper, Dr. Simon Marlow also muses over the fact that although you can’t legally have a crematorium cremate your limb after its amputated, you could ask for it back and burn it yourself. And, of course, if the limb is not going to be used for medical research, hospitals themselves almost universally will incinerate the limb anyway, which is all perfectly legal. It’s just the crematoriums that can’t do it.

But to sum up, it would seem in most regions of the world, as long as the bits of you removed don’t pose a significant health risk to the general public, while many a doctor or hospital (particularly research hospitals) may resist if you ask for a body part back, if you’re insistent enough, you’ll likely have good luck in having it returned. And once you have it back, for the most part you are free to do with it as you please.

Obviously losing a limb is nearly always less than ideal (unless, I suppose, you have Body Integrity Identity Disorder), but for those who persist on finding the positive in any situation, if the aforementioned Kristi Loyall is any indication, there are a lot of hilarious things you can do with your own severed limb.