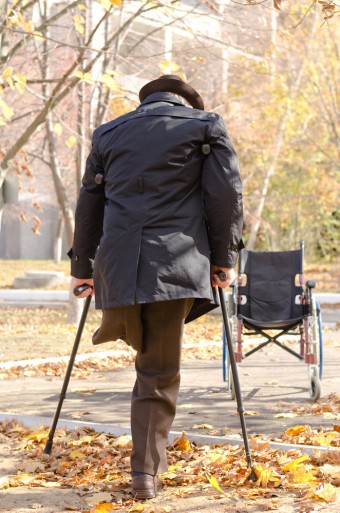 Body Integrity Identity Disorder, or BIID, is a condition where a person feels an overwhelming desire to become an amputee.  Some also consider it to include those who feel a desire to have some sort of other disability like becoming paralyzed or deaf.  In the case of those desiring to become amputees, the limb that they want to amputate is a healthy, functioning body part that they simply believe does not belong to them. Individuals with BIID tend to be very secretive about their condition, but it’s estimated that there are several thousand people worldwide suffering from this.

One of the first purported cases of something like BIID was recorded in a medical textbook from 1785. A man from England held a surgeon at gunpoint until the surgeon amputated his leg. The man believed that becoming an amputee would allow him to woo a woman who was also an amputee. There are also many other reports of conditions that bear a resemblance to BIID, with those individuals connecting a disability with sexual desire. For instance, one man did not feel satisfied in the bedroom unless he imagined being with a woman who walked with a limp.

In recent years, after additional study of the disorder, the diagnosis of BIID has been clarified. While men and women with BIID occasionally report that they feel sexually aroused at the thought of becoming an amputee, it’s usually only a secondary reason, if at all, for the desire to remove an otherwise healthy body part, after the much more strong notion that the limb does not belong to their body. Oftentimes they know, to the inch, where they would like the body part amputated.

The medical community disagrees on the exact cause of Body Integrity Identity Disorder. The most prevalent theory claims that BIID originates in the right parietal lobe of the brain, where the brain has a sort of mental “map” of the body, which lets the brain know the location of legs, arms, and other body parts. It’s theorized that individuals with BIID have a variation in that part of their brain, caused either by genetics or an injury, that removes a limb or limbs from that mental “map.”

Another theory, this one not nearly as well accepted is that a patient perhaps met and admired an amputee while young and their desires are linked to wanting to be like that person. Whether this is correct or not, for many BIID sufferers who did not become that way via head injury, the desire to become an amputee often starts in childhood.

Since a relatively small number of people suffer from the disease worldwide, a standard treatment has yet to be devised by the medical community. Traditional treatments for other psychological disorders have shown to be largely ineffective in cases of BIID. That said, when BIID occurs after an injury to the brain which impacts the mental “map,” movement therapy with a therapist that specifically targets the “alien” body part has been at least moderately effective in some cases.

However the treatment which so far has proven to be the most effective is also the most controversial: surgery to amputate the limb. Those with BIID who undergo surgery often claim long term satisfaction with the treatment.

Of course, amputating a healthy body part is something few doctors are willing to do, and even those who would be willing are generally barred from doing so. Physicians in Israel claim that the surgery contradicts the Jewish tradition that allows a doctor a limited scope of what they can or cannot do to the human body. Other doctors, though not technically bound to it, rely on the Hippocratic Oath as justification for not performing the surgery. Those medical professionals in favor of allowing the surgery rely on the argument of patient autonomy, or the ability of a patient to make their own decision. They argue that surgeons perform operations on healthy body parts all the time, in the cases of cosmetic surgery and even during sex reassignment surgery, and they sometimes take little to no time to determine if the surgery is in the patient’s best interests.

For the vast majority who can’t get surgery to remove the offending appendage, many use wheelchairs, crutches, or braces while in the comfort and secrecy of their own home, and they live their lives as much as they can as if they are disabled. However pretending to be an amputee fails to satisfy a number of those with BIID and so they continue to explore surgery, sometimes finding less than reputable doctors.  For instance, an elderly man, Philip Bondy, from the United States traveled to meet Dr. John Ronald Brown in Mexico for an operation to remove his leg, paying Brown $10,000 to do it. After the leg was amputated, Brown sent him to stay at a nearby hotel while Bondy’s leg healed. Bondy ended up dying of gangrene shortly thereafter. For his part in the affair, the 77 year old Brown ultimately was sentenced to 15 years to life in prison.

For others, they simply attempt the removal themselves, such as by placing an arm on a railroad track or using power tools. They also sometimes damage the limb such that a physician will be forced to amputate. But this too is not without significant risk. For instance, a Scottish woman packed dry ice around her legs in an attempt to cause enough damage to warrant amputation, but she failed to keep the ice on long enough to cause enough tissue damage due to the intense pain.  As a result, she was left with badly damaged legs that were nonetheless going to be staying attached.

In a similar case, a man going by the name “Karl” ended up using 100 pounds of dry ice to do the deed successfully,

The first thing I did was I used a wooden flour scoop to scoop some granulated dry ice into the bucket. … It filled the wastebasket with carbon dioxide gas, which was 79 degrees below zero. I spent the next six hours well-packed in the dry ice, and then I’d add more dry ice to keep it topped off.  I’d done all the thermodynamic calculations, the mass of tissue, how much heat you had to subtract from that tissue to achieve freezing temperatures. And I knew that after six hours, I had certainly achieved more than enough to freeze the full thickness.

Sure enough, that did the trick and within a month doctors were forced to amputate Karl’s legs.    Of course, he still had another limb he felt didn’t belong; his left hand, but after extensive therapy, he was able to quell the urge enough to decide to keep it.

Unfortunately, like another BIID sufferer stated, who for anonymity’s sake goes only by “Dan,” it’s not all sunshine and lollipops after amputation. “Having my leg off would cause a handicap and suffering. But BIID also causes handicap and suffering, and it’s just a matter of which is worse.”  Another stated, “It wasn’t so much that I wanted to be an amputee as much as I just felt like I was not supposed to have my legs…”

For Karl, at certain times, he wishes he’d stuck with just suffering from BIID rather than missing out on walking on a beach or the like. “It’s all those little things, like that… What the hell was I thinking?”