The Terrifying Phenomenon of Spider Rain 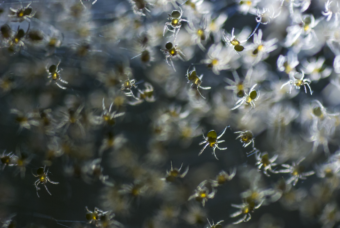 Worryingly described by entomologists and arachnologists as a “not uncommon” occurrence in certain parts of the globe, spider rain can see anywhere from a few thousand to several million spiders tumble from the sky in a given area, seemingly out of nowhere.

So what causes it? This is thanks to a rather interesting behaviour exhibited by spiders known as ballooning, which essentially involves an individual spider climbing to a high point and then firing strands of silk into the air, with the result being the spider being carried away by the wind, sometimes for many hundreds of miles.

Arachnologists are quick to point out that countless spiders are probably flying around over head at any particular time and that they usually land without much fanfare and go about their way. Sometimes, though, many thousands or millions of spiders will decide to balloon at the exact same time, either because they’re a single colony or because weather conditions force them to. In regards to the latter, on rare occasions certain weather patterns can see the millions of spiders floating through the air at any given time being thrown to Earth simultaneously at the same location.

Other known causes of spider rain are floods and wildfires, which can prompt spiders to flee en masse to escape what would otherwise be their own demise, concerningly illustrating that the age old “kill it with fire” way of getting rid of spiders isn’t fool-proof.

As an example of the former flood trigger phenomenon, in Pakistan following devastating floods throughout the country in 2010, millions of spiders noped out of there in a hurry via mass ballooning. While you’d expect the people of Pakistan to be unhappy about having to deal with both millions of spiders raining from the sky and floods, the spiders were seen as a good thing by most citizens because they ate all the mosquitoes.

On that note, in addition to ensuring the skies remain free of disease carrying insects, wandering clouds of spiders also provide ample food for birds and other creatures- a fact that combined with spiders often being amongst the first creatures to return to land devastated by flood and fire (via ballooning and landing back in the area), means that spider rain is generally seen as being an overall beneficial thing for nature via allowing these staples of the food chain to quickly and widely disperse themselves.

While you can observe individual spiders floating about in most regions of the Earth, if you’re wanting so see the specific phenomenon of spider rain, where millions of spiders fall from above en masse, your best bet is to live in certain regions of Australia (because, of course it’s Australia where this is most common). As New South Wales resident Keith Basterfield states, “They fly through the sky and then we see these falls of spiderwebs that look almost as if it’s snowing.” (You can see something of this effect here in a video shot in Texas.)

Luckily for arachnophobes, mass ballooning is a behaviour near exclusively observed in smaller species of spider or ones that were born very recently, as larger spiders are simply too heavy to be carried along by typical winds. As a result, if you’re currently imagining endless waves of tarantulas raining from the sky, you can rest assured that if you ever witness spider rain firsthand, at least you won’t be dealing with big spiders, just the little ones that can crawl around on you without you even noticing they’re there… This is also significant because most small spiders don’t posses the ability to penetrate human skin with their bites, even if they are otherwise highly venomous.

Thus, for the most part, spider rain is harmless (to humans). However, the phenomenon can potentially damage crops when millions of spiders all land in the same location, with their subsequent webs cutting the plants off from enough sunlight. (See a picture of this here.)

But I think the main point we want to drive home to arachnophobes is that some spiders can fly, and at any given time they may just fall from the sky on top of your head…