Spiders and Webs – Why Don’t They Get Stuck? 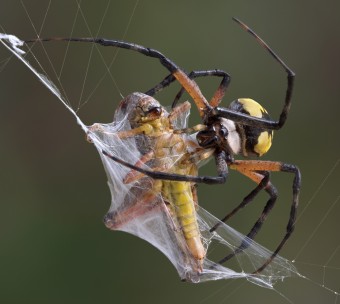 Moths, beetles and flies all get caught in spider webs, but you almost never see a spider unable to extricate herself from one. Here’s why.

When a spider makes an orb web, each line is actually comprised of at least two or more threads, and in fact, the supporting threads, radiating spokes and hub are all made from silk that is not sticky.

On the other hand, the strands that comprise the “net” part of the web, those that usually trap unwary insects, are covered with glue. The fact that the spider is able to navigate these sticky threads as effectively as it does has to do with a couple of unique properties on her legs.

An oily substance apparently covers spider legs and helps keep the glue from sticking. Pursuant to a study published in 2011 in the journal Naturwissenschaften, arachnologists Eberhard and Briceno washed the legs of spiders and found that after they were clean, the legs were much more likely to adhere to sticky threads.

In addition, Eberhard and Briceno also noted that the spider’s gait seemed specially designed, such that it “reduced the area of contact between the sticky droplets and the setae [spiny leg hairs].” This, combined with the fact that the thread touched many (rather than only a few) branching hairs, made it very unlikely that any glue would slide all the way down the hairs to make contact with the main part of the leg – which would have made permanent adherence more likely.

Furthermore, the spider has a unique way of grasping sticky threat, using a third claw that allows it to shake itself free from the glue. As it walks along sticky silk, the spider grasps the thread with its third claw and presses the silk into its spiny hairs, which are somewhat elastic and, therefore, bend back under the pressure.

As the spider moves down the thread, it releases portions of it with its third claw, freeing the hairs, which thenrebound outward, effectively flinging the sticky thread away from its leg.

Although rare (since most webs are designed to catch flying insects not crawling ones), spiders will occasionally get caught in their competitors’ webs. Even then, though, many times they are able to extricate themselves.

However, some spiders are known to use their competitors’ webs against them. Some of these belong to the genus, Portia. The Portias prey on their cousins by pretending to be either a captured victim or a courting male of the same species.

Able to jump in and out of a web, the Portia coordinates its leap onto the web with a breeze, so that any vibrations caused by the jump are camouflaged by those caused by the wind. Crafty, Portias change their tactics depending on the species being hunted, and even successfully kill (and eat) other aggressive spiders.

If you liked this article and the Bonus Spider Facts below, you might also enjoy: