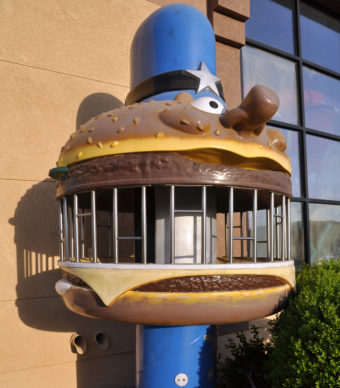 McDonald’s first started the Monopoly promotion in 1987, and its premise was simple: attach Monopoly pieces to food cartons and cups, with each piece signifying a Monopoly property or a small prize. One out of every four pieces would be a small prize, such as a medium fry or soda, and a very few of the prizes would be significantly more valuable, such as a car or, with the proper pieces, cash – up to $1 million.

The key to any promotion is to keep the cost of the prizes below the increase in sales it produces, and so for the Monopoly game, there were very few expensive prize pieces. In addition, as a full-set of properties was needed to win the nice prizes, for each set, at least one property only had a few pieces printed (e.g., there would be many Park Places but precious few Boardwalks). Nonetheless, as long as everyone played fair, and diligently collected the attached pieces, eventually someone could win each of the prizes (although some years no one won the $1 million grand prize). But that’s the key – playing fair.

It turns out, as with the real game of Monopoly, its not so hard to cheat if you’re the banker. Enter Jerome Jacobson of Simon Marketing Inc., the latter being one-time managers of the Monopoly promotion for McDonald’s.

Most important to the story at hand is that it was the aforementioned employee of Simon Marketing Inc, security officer Jerome Jacobson, who was put in charge of the distribution of certain key game pieces. As a part of that job, he would travel with said pieces to the factories making McDonald’s cups and cartons, where the pieces would then be attached to said items.

Not exactly an Ocean’s 11 style caper, en route with the sealed envelope containing the pieces, Jacobson would simply go into a private place (like an airport bathroom), carefully open the envelope, steal the best pieces, and then reseal and deliver the rest.

Smart enough not to try to redeem the pieces himself, with his first theft in 1989, Jacobson gave the piece ($25,000) to his stepbrother who shared the proceeds with him. Over the years, apparently Jacobson became more emboldened, and by 1995, he was stealing most of the pieces of greatest value.

To further distance himself from the theft, Jacobson and his cohorts began recruiting random people, who would simply purchase the pieces from them for a percentage of their overall ultimate worth once cashed in. (Ironically, and one of the ways in which the FBI tracked who was all involved, was that in order to buy the pieces with large prizes, many of the biggest prize winners mortgaged their homes before collecting their McDonald’s Monopoly prizes.)

Jacobson also in at least one instance completely gave the biggest $1 million prize away in 1995 when he anonymously sent the needed pieces for the prize to St. Jude’s Children’s Hospital. While technically under the rules of the promotion, the prizes were supposed to be non-transferable, McDonald’s chose to make an exception in this case and awarded the prize to St. Jude’s.

Of course, all good things must come to an end, and if the banker in a Monopoly game cheats too much, eventually the other players will catch on.

And so it was that the scam was first revealed to law enforcement by an informant who had been recruited by the Jacobson group to “win” a 1996 Dodge Viper. As the fraud happened across the country and the U.S. mail was involved, the FBI had jurisdiction, and they named their investigation “Operation Final Answer,” in reference to another McDonald’s promotion Jacobson was rigging connected to Who Wants to Be a Millionaire.

Fully cooperating with the Bureau, McDonald’s agreed to continue the contest to enable agents to figure out which prize winners were involved and which weren’t, gathering evidence via methods such as wire taps, phone records, and the aforementioned pattern of winners who mortgaged their houses shortly before collecting a big prize.

In another rather humorous turn, during one stake out, FBI agents reported watching one of Jacobson’s associates meet with a recruit in a parking lot in Fair Play, South Carolina.

It all came crashing down in 2001 when Jacobson and seven others were charged with conspiracy to commit mail fraud (a federal felony) in Jacksonville, Florida. Jacobson pled guilty to the charge in 2002 and was sentenced to three years and one month in federal prison. He also had to give back the near $1 million he had collected over the lifespan of the scam as his cut.

Altogether, 51 otherwise law abiding citizens were convicted, with 47 pleading guilty and four others ultimately being found guilty (although four of these 51 later had their convictions overturned due to technicalities). It isn’t clear exactly if every prize winner involved was actually aware the whole thing was a scam, however, with many claiming they didn’t know the prize pieces were obtained illegally.

Whatever the case, the fallout was much bigger than just a few dozen people serving jail time while a few dozen others who would have won a big prize did not.  After the scandal was revealed, McDonald’s promptly terminated their approximately half a billion dollar contract with Simon Marketing Inc, causing a couple hundred of Jerome’s former co-workers to lose their jobs.

To make amends to the general public, McDonald’s promptly launched a flash-Monopoly run, with cash prizes awarded totaling about $10 million. It should also be noted that despite St. Jude’s Children’s Hospital’s winning prize pieces being acquired fraudulently, McDonald’s still continued paying the installments on the million dollar prize to them.