Is it Possible to Cash Oversized Novelty Prize Checks? 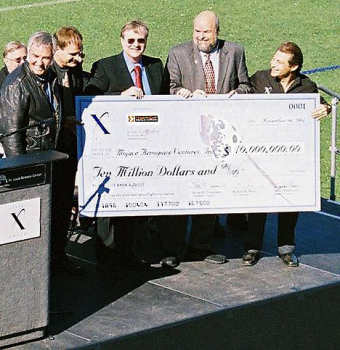 The giant novelty check (cheque to our readers of the non-American persuasion) is a comedy staple, even if you’ve never been lucky enough to handle one in real life, you’ve likely drawn a cartoonishsly huge moustache on a picture of someone holding one in a newspaper. (Just me?)

You’ve also probably found yourself thinking, “can you actually cash that thing?” and the answer is, you totally can… sort of. Though, it’s rather silly since you normally get a regular sized check too with the big one.

Though cashing a check is a relatively simple affair from the cashier’s perspective, the work on the back end is remarkably sophisticated and involves an amazing amount of automated technology and travel for the checks.

With this in mind, it’s clear why virtually all checks come in a fairly uniform size and design- it’s just easier for everyone involved that way. Though several million checks are sorted through, by hand, every single year (usually due to them being rejected by a machine for some reason or another) this costs banks money, so is obviously something they are very keen to cut down on.

However, legally, there’s nothing stopping you from writing a check on, well, anything, such as a napkin, and then sending it to someone you hate. In reality, however, it doesn’t always work that way. For example, there are many, many colloquial sources discussing the story of a disgruntled man who wrote all the information for a check onto a cow, then cashed it to annoy his bank.

If that story sounds too amazing to be true, it’s because it is. The story can be traced back to the very fictional escapades of one, Albert Haddock, a character created back in 1935 by the British author, A.P. Herbert. As recounted by Snopes, despite being entirely untrue, the story is often cited as an example of unusual things people have carved checks onto. It does raise an interesting issue of what exactly a check is.

According to Brian Black, onetime managing director of operations and technology at the Bank Administration Institute,

It [a check] has to contain certain features, and it can be written on anything,  as long as it has the elements, the surface doesn’t make a difference. A check is an order to pay someone, that’s all it is.

Basically, as long as whatever the check is printed on, giant or otherwise, contains everything necessary for it to be legally considered a check (the amount to be paid; the payer and payee names; the account number; the  name of the bank where the payer has the account and what state the bank is in; the payer’s signature, and the date the check was written), it is a valid check. As Brian states, the check is an order to pay someone, and it doesn’t have to be printed on the pieces of paper the bank give you or you bought from them; it’s just a lot easier for the bank and the person cashing it if they are.

In regards to giant checks, when asked about them, a spokeswoman for iWon online sweepstakes, Samantha Better, said that their winners are also given regular sized checks for their own convenience that they can cash instead. Going on to say that most opt to keep their giant check as a souvenir rather than go through the hassle of actually trying to cash it.

That being said, many banks have small print in their terms stating that they can reject any non-standard payments, so while the giant novelty checks are technically legal and valid to cash, those banks can, if they choose, reject them.

However, even if you did have the balls to take your giant check to the bank and you find they have no such internal rules against it, they wouldn’t send it off in a suitably giant envelope. Rather, they’d more likely simply take the check, then write all the relevant information down on some bank stationary and send it off that way, which is far less interesting and would result in you losing your awesome giant talking piece.

Since you almost certainly clicked this to read about someone cashing a stupid check, we want to tell you about, Patrick Combs. The man who, upon receiving a junk-mail check for a little over $95,000, endorsed it with a smiley face and then cashed it. To his surprise, his bank accidentally honored it. Amazingly, because the bank failed to retract their error within 24 hours of the check bouncing, all $95,000+ was legally his. Since the check wasn’t valid, it came out of the bank’s pocket.

When news of Patrick’s hilarious feat of getting one over on his bank hit the news, some of the finest legal minds in banking joined the argument, on Patrick’s side. Essentially, Patrick was home free and in full, legal possession of $95,000 of the bank’s money. Of course, this didn’t stop the bank from having their head of security threaten him, trying to get him to give the money back. But Patrick knew the law was on his side on this one and had fun with it, telling the security officer,

Give me a letter on official bank stationery stating that you are who you say you are, that you indeed work for the bank, and also put in that letter the reason why the bank is requesting the money back, as I’m a little confused on that. When I get that letter, we’ll go from there.

Despite the threats, which actually made him less inclined to give the money back, and that at the time he had about $45,000 in credit-card debt, Patrick eventually decided to return it.  He had meant it as a joke and didn’t actually want to take any money from anyone, not the bank or even the junk mailer who had sent it to him.

He didn’t come off too badly over the thing, though. To this day, he’s still riding the coattails of the story to make a  living in his 75 minute Man 1, Bank 0 stage show.  He was even once hired to perform the show at a major banker’s conference.  Presumably this functions as something of a campfire horror story at banking executive retreats.