December 19, 2017 Melissa
Tryst G. asks: Who first noticed Kevin Bacon could be connected to any actor in just six degrees or less? 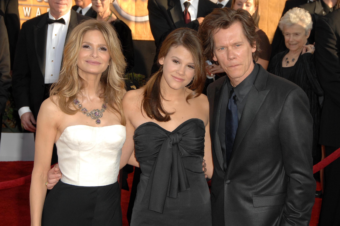 The basic premise of any person being within six degrees of relationship to each other traces back to at least 1929, mentioned in the short story “Chain-Links” from the book Everything is Different, by Hungarian author Frigyes Karinthy.  In the story, Karinthy was putting forth the idea that, with advances in technology, despite vast distances between people and the growing world population, the world was actually shrinking from an interconnectedness standpoint- a trend that would no doubt only continue over time. As such, a game is proposed in the story as follows:

Although a few toyed with this general idea (though not necessarily six degrees specifically) over the following decades when studying network theory- most notably Stanley Milgram in his famous “Small-World Experiment“- the specific idea of a supposed maximum of six degrees of separation between everyone on Earth didn’t really enter into popular culture until John Guare incorporated it into his play, Six Degrees of Separation, in 1990. This was later made into a 1993 film starring Will Smith, Stockard Channing, and Donald Sutherland. (Ironically, Donald Sutherland for a time held the crown as the actual most interconnected actor, as we’ll get into shortly.)

This all brings us around to Kevin Bacon and a trio of college students with nothing better to do owing to a snow storm in 1994. The students in question, Craig Fass, Mike Ginelli and Brian Turtle of Albright College in Reading, PA, were watching Footloose on TV. After it ended, the 1994 The Air Up There either came on or was being advertised. The three naturally noticed Bacon in both and began to discuss the amazing number of movies Kevin Bacon had starred in and with whom he worked.

Inspired, they came up with a game in which someone would mention a random actor or actress’ name and they would try to figure out how to connect that person to Bacon in six degrees or fewer.  For example: Julia Louis-Dreyfus is connected to Kevin Bacon by two degrees, as Bacon worked with Wayne Knight on JFK and Knight also played Newman on Seinfeld, in which Louis-Dreyfus was Elaine Benes. She can also be connected in two degrees via the fact that she and Dianne Weist appeared together in Hannah and Her Sisters. Diane Wiest, of course, appeared with Kevin Bacon in Footloose.

So how did this go from college party game to one known the world over? This is thanks, in part, to John Stewart and his aptly named talk show, The Jon Stewart Show (1993-1995). The students wrote Stewart about their game and, thinking it would make good fodder for his show, they were invited to appear on The Jon Stewart Show to talk about it. They also ultimately appeared on the The Howard Stern Show with Kevin Bacon himself; the game spread far and wide from there.

Interestingly, while back in the day, we had to rely on our memories to play the game and find a celebrity’s Bacon number, today Google will do the work for you. Simply run a search with “Bacon number” and the person’s name, and Google will tell you the degrees of separation. Just as helpfully, the Oracle of Bacon provides the same service.

And speaking of the Oracle of Bacon, it turns out they found you can’t actually connect every actor in Hollywood to Bacon in under six moves. Further, Bacon isn’t even the most linkable actor (though after analyzing over 800,000 actors and actresses in the history of film, they did find Bacon was more linkable than approximately 99% of actors in history). As for the true most linkable actor in Hollywood, this has varied over time, but has included such people as Donald Sutherland, Dennis Hopper, Rod Steiger, and, as of right now, Eric Roberts. Bacon, interestingly enough, is currently all the way down at number 455. Rounding out the top 5 at present are #2 Michael Madsen, #3 Samuel L. Jackson, #4 Danny Trejo, and #5 Willem Dafoe.