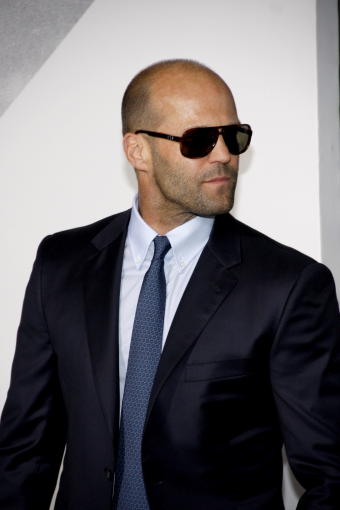 Jason Statham, the stunningly handsome man you occasionally see glistening on the cover of Men’s Health or kicking The Rock in the face in the latest Fast and the Furious movie, is primarily known for two kinds of roles- action movies, where he uses his formidable athleticism to beat up dozens of nameless thugs, and comedy films, where he usually plays a wise-cracking hustler. These are two roles he’s basically trained for his entire life, seeing as before he was an actor, he was, amongst other things, a street hustler and a professional diver who came just one position away from making the Olympics not once, but three consecutive Olympiads.

A naturally gifted athlete in his youth, Statham reportedly excelled at a range of sports during his formative years, including football (soccer), tennis, and gymnastics, along with boxing and several martial arts. In addition to this, the future action star would make ends meet hocking cheap jewelry and perfume on the streets of London under the watchful eye of his father, Barry, who was known by the affectionate nickname, “Nogger” for reasons that Statham has never elaborated on. He stated of this,

As a boy, I was ‘Nogger’s Son.’ So I could sit and watch them, masters at work, and everyone had good funny names: Peckhead Pete, Mickey Drippin, Colin the Dog. I’d sit down outside of Harrods and I’d pitch the jewelry. I’d do five chains, I’d do twenty-four-inch rope, the matching eighteen, a bracelet, a figaro chain, a matching bracelet, and either a pendant or a choice of a gent’s or a lady’s ring. And that would be the whole set. We’d display it in boxes and we’d wrap it up in tissue paper. We’d place it in their palms: ‘Here you are, madam!’

Statham has always maintained that he was just giving people a good deal, in his own words:

What I’m selling is costume jewelry, basically, that you can buy in Barneys or any of these other f*****g trumped-up shops that have rates that are like extortionist. They’ve got to turn the lights on, they’ve got carpets and chandeliers. They’ve got all that to pay for, so they can’t sell that chain for what I can sell it for. I’m getting it from the same f*****g sources, but I’m selling it with a bit of street theater and having a bit of fun with it, making a living. People ain’t getting ripped up. No one’s saying it’s gold. We never used to say it was gold. We never used to say it was gold-plated. We never used to say what it was. They’re going, ‘Is it stolen? Is it gold?’ And to this we used to say things like ‘You’ve heard of Cartier, madam?’ And everyone has to answer ‘Yes,’ because who hasn’t heard of Cartier? We got them going by making them say: Yes. Yes. Yes. Now, if you’re an idiot and you think it’s gold, that’s your problem, not mine.

Statham’s life was changed forever at age 13 when he saw a guy doing a high-dive while on vacation and thought it looked kind of awesome. He subsequently decided to attempt to pursue a professional career in it at age 15; a testament to Statham’s natural athleticism is the fact that, despite starting his diving career nearly a decade later than most of his peers, just three years later at the age of 18 Statham was included on the British National Diving Squad and soon became one of the best divers in the UK. 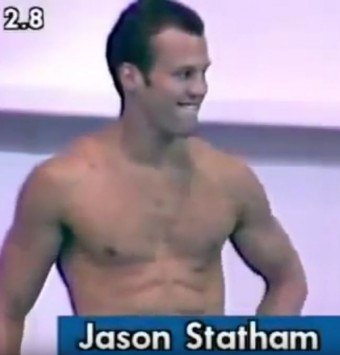 Statham’s skills as a diver were noted at the time as being “formidable” and many of his peers praised his “accuracy”, “precision”, and “fearlessness”. Though he never won a medal during his 12 year career, Statham competed on behalf of Britain in the 1990 Commonwealth games (footage of which can be found on YouTube) and, as previously mentioned, came ridiculously close to competing in the Olympics, not once, but three times in 1988, 1992, and 1996.  At each Olympic trial, he placed third- only two of his fellow countrymen were taken each time.  Not seeing it as having been a waste of his time, he noted, “Despite the hard work, the failure to win a medal made me more disciplined, taught me to focus on hard work and determined me for the success of my future endeavours.”

In between practising every day and travelling to diving competitions, Statham continued his lucrative side career of selling counterfeit goods on the street. He would later recall that “All the other divers were broke. I was the only one who had money. Plenty of money, loads of dough. Two, three grand in a weekend. Me and my mate Fish Fibbens, when we had enough money, we’d buy cars and we’d race the f-ck out of each other, all through London. It was really dangerous; we’re lucky we didn’t get f–king killed or kill somebody.” 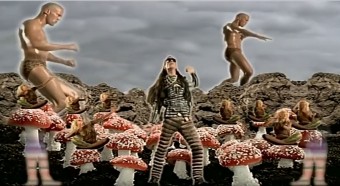 In 1993, Statham got his first taste of a career outside of sport when he was approached to appear in a music video for the song “Comin’ On Strong” by Scottish electronic band, The Shamen. The role basically consisted of an oiled up Statham rhythmically gyrating in a leopard print thong in the background… but it nonetheless gave him some much needed exposure beyond the world of competitive diving. For the curious, yes, the horrendously glorious video is on YouTube.

While training in 1994, Statham was discovered by a modelling agency that specifically marketed its services to athletes. He initially planned to exclusively model sportswear, but the diver-turning-model soon found himself being asked to model a range of menswear from suits to giant, 1990’s era overcoats.

Statham even enjoyed a brief career as a catwalk model, appearing briefly in the 1996 Paris Fashion Show. He went on to model for several large brands including Levis and French Connection UK (the brand that caused widespread outrage with their “FCUK fashion” campaign). Statham’s career as a model was noted as being unlikely due to the fact that he was balding when French Connection hired him at age 26. French Connection spokesperson Lilly Anderson explained their decision to hire him as follows, “We chose Jason because we wanted our model to look like a normal guy. His look is just right for now – very masculine and not too male-modelly.”

Through his contract with French Connection, Statham had a chance encounter with British director Guy Ritchie who, upon learning of Statham’s past career as a street hustler, suggested he’d be a perfect for the role of Bacon – a street hustler- in his 1998 film Lock Stock and Two Smoking Barrels. When asked to recall their encounter, Statham explained that Ritchie asked him to “give him some of the patter”, to which he responded by launching into one of this tried and true sales pitches, during which he supposedly sold Ritchie a watch, the money for which he claims he refused to give back. 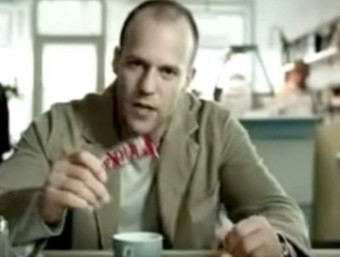 Though these two films launched Statham’s career, his best known role for many years was that of the so-called “Break Philosopher” in a 2003 ad campaign for Kit-Kat. The most famous of these was one featuring Statham sitting in a cafe, talking about the heroic journey undertaken by the common salmon to breed. He ended his spiel by saying “Finally, it reaches its goal and is absolutely knackered. And then it dies” before reminding the audience “Remember, you are not a salmon”.

Since then, Statham has appeared in dozens of films and has become one of Hollywood’s most bankable actions stars, despite that, as he put, it “I’ve never had a f-cking acting lesson; no one’s telling me how to act. Would it be better for Daniel Day-Lewis to play Lincoln than me? [laughs] I think so. But no one’s asked me to play Lincoln, and I’m not too worried about not getting the offer.”

Not bad for a guy who used to make ends meet selling fake watches and costume jewelry on the streets.