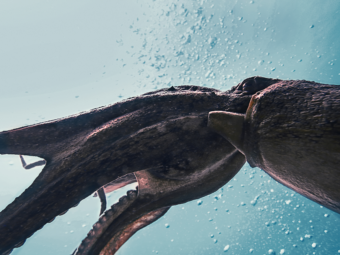 Arising out of the peace and prosperity of the post-war world, in the middle of the 20th century Americans threw themselves into a variety of weird fads, with goldfish swallowing, pet rocks (see: How Did the Pet Rock Fad Start?), streaking, dance marathons, and sea monkeys (see What are Sea Monkeys?) among the most popular. One that received less attention internationally, but whose participants and spectators ardently loved, was the curious case of octopus wrestling.

At the time, the general perception of giant octopuses was that they were fearsome predators of the deep.  As such, wrestling one seemed the height of manliness. As for the developed sport itself, it was pretty much like it sounds, involving men hunting out an octopus’ lair and then wrangling the cephalopod out and up to the surface by hand.

That said, according to accounts from early practitioners of the sport, it was inspired by a much more bloody pastime- octopus hunting, which was the subject of an apparently widely-read story published in Modern Mechanix, “Octopus Wrestling is My Hobby” (April 1949).

In the article, author Wilmon Menard describes in great and brutal detail a hunting expedition he took to the South Pacific, in which he and his native guides found, caught and killed octopuses, including one that Menard described as “a huge monster with 25-foot tentacles.”

Per Menard, capturing an octopus first required getting it sufficiently fearful, defensive or curious to come out of its lair. Once they got it to emerge, the octopus would often go on the attack, wrapping its tentacles around whatever it could grab, inevitably something essential or delicate – like a diver’s regulator or mask.

Menard reported the “huge monster” began its attack by lashing at the men with its tentacles, which they began to hack off with knives. Menard then states the octopus began “pulling itself up the reef by its partly-severed tentacles. . . then it started rolling toward us.” Eventually the men were heroically able to drive spears into its head to kill the fearsome creature. Menard also took the time to point out that, at least according to him, an octopus would make “a human-like moan” when it died…

So fast-forward about a decade later to Seattle, Washington and the diving club, the Puget Sound Mud Sharks, who also enjoyed tangling with octopuses, in this case the Giant Pacific variety (enteroctopus dofleini). Unlike Menard, however, once they captured one of the animals and took its measurements, the diving club members just donated it (alive) to aquariums in the area, or more often just released it back into the wild after the fun (for the humans) was over.

Holding what they called the World Octopus Wrestling Championships at Titlow Beach in the late 1950s and early 1960s, the rules were simple: three-men teams dived looking for octopuses in two categories: scuba gear and free diving. The former received one point per pound of any octopus they caught, while the latter free divers received two points per pound.

The octopuses caught typically ranged from 50-60 pounds (about 25 kg, though could be as heavy as a little over twice that) and usually measured from 7 to 12 feet across (about 2-4 meters). They were kept on shore in fish tanks while they awaited weigh-ins and were later generally released back into the water once the event was over as previously noted.

One of the founders of the sport, Gary Keffler (who incidentally was once Lloyd Bridges’ stunt double), described the “dangers” of tangling with giant octopuses in a much less exaggerated manner than Menard did in his 1949 piece:

Keffler also noted that, contrary to what you might think, the Giant Pacific octopus, despite being one of the world’s largest octopuses, isn’t actually terribly strong, certainly not enough to squeeze a person in any damaging way, nor are their beaks of any real concern.

He also stated that it wasn’t actually that hard to pull lose from the tentacles if things got a bit too dangerous, like if it ripped out your air supply and you needed a little break.  The hard part was simply coaxing the octopus out of its den. Apparently if it didn’t come out willingly, it was somewhat difficult to pull its slippery body out when it had all its arms suctioned to the rocks.

At the height of the sport’s popularity in 1964, more than 100 divers competed before a crowd of about 5,000 spectators. However, within a decade, people had moved onto other hobbies. Even the aforementioned co-founder of the sport, Gary Keffler, would later state in an interview about his retrospective thoughts on wrestling octopus, “There’s no reason- unless you were going to get them for food- to harm them or take them. So why bother hurting something that isn’t hurting you?”

The shift in attitude was largely thanks to the widespread perception of octopus as “dangerous sea monsters” changing to the more accurate label of “fascinating, mostly harmless (to humans) animals.” This switch was helped in no small part by the 1971 Jacques Cousteau documentary Octopus, Octopus (watch it here) which documented the creatures in great detail, including their relatively benign (to humans) nature.

Needless to say, the general public, and the divers themselves, quickly lost interest, starting to see octopus wrestling more as animal cruelty than good fun and a fair fight.

And so it was that in 1976, the state mostly outlawed the sport, making it illegal to “molest” or “harass” an octopus, although it could still be fished for food purposes, meaning one could choose to capture octopus by hand with intent to eat, if the individual in question had an appropriate permit. In fact, by 2010, octopuses in the waters around Washington could only be harvested without anything that would “penetrate or mutilate the body.”

This brings us to one of the region’s last publicly known octopus wrestlers. For reasons not entirely clear, in 2012 then 19 year old Dylan Mayer was inspired to hunt an octopus with nothing but his bare hands, training for the event in his parent’s pool with friends.

Once he deemed himself ready, he was able to get a permit for such a hunt.

And so it was that on October 31, 2012, he went into the water off Alki Beach to search for his prey, which turned out to be a nine foot Giant Pacific octopus that initially retreated in its rock piling upon encountering Mayer. However, after continued harassment, Mayer reported it exploded out at him with a vengeance, simultaneously grabbing Mayer’s leg and wrapping its tentacles all over his torso and face.

At this point, Mayer stated the octopus pulled the regulator out of his mouth. Panicking a little, he punched the octopus in the head and the fight was on.

The media reported it took approximately 25 minutes for Mayer to wrestle the octopus to the surface, though if you read the accounts of veteran octopus wrestlers or just watch the previously linked Octopus, Octopus, this seems a bit exaggerated. As Jacques Cousteau himself notes (and demonstrates) “matched in mid-water against a girl with experience, even the largest octopus in the world doesn’t stand a chance.” So one has to wonder how much of this time (if it really took that long at all) was simply Mayer needing to stop at appropriate depths for a while to allow the nitrogen to off-gas from his system, rather than a major struggle, as was often described in news reports.

Whatever the case, Mayer was successful at bringing the octopus back to land, though soon wished he wasn’t. When a group of divers saw him emerge, “punching an 80-pound octopus,” they were outraged. Nevertheless, they were unable to stop him from taking the octopus home, as he had the proper permit and had captured it with his bare hands with intent to eat it, making it perfectly legal for him to do so. Subsequently, when he got home, he cooked and ate the animal.

But this is the age of social media and flash internet mobs; so it’s unsurprising that when the other divers, still aghast and having taken photos of Mayer, posted them online, the public outrage was palpable, with people eventually tracking down the young man’s personal details to share among the masses.

Thankfully for the embattled teenager, Mayer was redeemed in the public eye in part by showing up to a Washington Fish and Wildlife Commission meeting with his parents and stating, “I was the hunter. I did not know that that place was so loved by all the divers, or otherwise I would not have done it… I do agree with how that place should be off limits [to octopus hunting], and it should be clearly posted so that this mistake doesn’t happen again.”

On top of that, the New York Times, among others, pointed out the irony of some of the same news outlets who were vilifying Mayer one week singing the praises of a new restaurant, Bar Sajor, in Pioneer square the next, including giving rave reviews for the restaurant’s Giant Pacific octopus salad…  And, indeed, they noted commercially caught Giant Pacific octopus is popularly purchased and consumed at many restaurants around Seattle without any of the outrage that had been directed at Mayer, who’d perfectly legally caught and prepared his dinner himself.

Nevertheless, to address the public outrage that emerged from Mayer’s hunting trip, and to conserve specific popular diving sites, the state designated seven Octopus Protection Areas, more or less putting the final legal nail in the mostly long-closed coffin of the practice of wrestling Giant Pacific octopus in the region. (*Editor’s note: Though while illegal and even generally frowned upon by many divers, if my former diving instructor from Washington state is to be believed, the practice is still alive and well among a small percentage of people who simply wrestle with the creatures a while and let them go, rather than bring them to the surface.)