September 4, 2017 Melissa One comment
David N. asks: What is the first joke ever told? 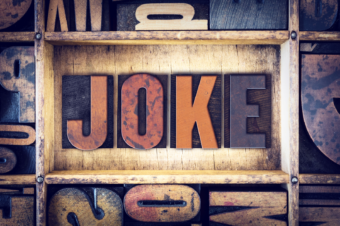 Born from cultures we can only read about and making fun of customs we don’t always understand, many of the world’s oldest jokes, to a modern audience, simply aren’t that funny. That said, humans being humans, with the oldest joke that has survived through today, it would appear little has changed in the interim- it, naturally, being a fart joke. To wit, recorded on a Sumerian tablet somewhere between 1900 and 2300 BC, the first known joke is as follow:

From this point, occasional surviving jokes pop up here and there, and even references to no longer surviving joke books. The first known of these is a collection of jokes from a social club in Athens that was reportedly compiled at the request of Philip the Great of Macedon (382–336 BC), but unfortunately has been lost to history. Several hundred years later (and a few more known references to lost joke books in the interim), we have a Greek joke book whose contents have survived to today.

That book, Philogelos, (full book here) dates to around the 4th or 5th century AD and includes 265 jokes, a selection of which shows a wide range of humor and, in some cases, how little basic joke themes have changed over the centuries:

An intellectual was told by someone: “your beard is now coming in.” So he went to the rear-entrance and waited for it. Another intellectual asked what he was doing. Once he heard the whole story, he said: “I’m not surprised that people say we lack common sense. How do you know that it’s not coming in by the other gate?”

Someone needled a jokester: “I had your wife, without paying a dime.” He replied: “It’s my duty as a husband to couple with such a monstrosity. What made you do it?”

A man with bad breath asked his wife: “Madame, why do you hate me? And she replied: “Because you love me.”

A young man invited into his home frisky old women. He said to his servants: “Mix a drink for one, and have sex with the other, if she wants to.” The women spoke up as one: “I’m not thirsty.”

A misogynist was sick, at death’s door. When his wife said to him, “If anything bad happens to you, I’ll hang myself,” he looked up at her and said: “Do me the favor while I’m still alive.”

An intellectual during the night ravished his grandmother and for this got a beating from his father. The intellectual complained: “You’ve been mounting my mother for a long time, without suffering any consequences from me. And now you’re mad that you found me screwing your mother for the first time ever!?”

Consulting a hotheaded doctor, a fellow says: “Professor, I’m unable to lie down or stand up; I can’t even sit down.” The doctor responds: “I guess the only thing left is to hang yourself.”

A student dunce went swimming and almost drowned. So now he swears he’ll never get into water until he’s really learned to swim.

A misogynist stood in the marketplace and announced: “I’m putting my wife up for sale, tax-free!” When people asked him why, he said: “So the authorities will impound her.”

Finally, there are a few riddles from the 10th century AD Anglo-Saxons recorded in the Exeter Codex that are generally regarded as the first known English jokes (albeit Old English) due to their double entendre nature. For example: “What hangs at a man’s thigh and wants to poke the hole that it’s often poked before? Answer: A key.”

And the similar themed: