Is Trial by Combat a Hollywood Invention?

September 4, 2017 Melissa
Marcus M. asks: Was trial by combat to determine if someone was innocent or not ever really a thing or is it just another Hollywood invention? 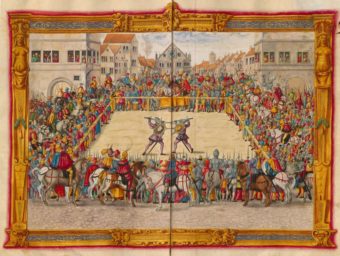 While dueling outside of the legal system to resolve a dispute has been around in one form or another seemingly as long as there have been humans, trial by combat (determining guilt or innocence with, essentially, a duel sanctioned by the courts) dates back to around the 7th century CE and Germanic law, becoming a relatively common practice in Europe through the 16th century.

By the early 8th century, trial by combat had been codified, including in the Lex Alamannorum (712-730 CE), and the Frankish Merovingians and Carolingians had set out capitularies on the practice by the turn of the 9th century.

In the Swedish tradition, trial by combat was called holmgang, and by the 13th century, the rules of the practice were written down:

If someone speaks insults to another . . . they shall meet where three roads meet. If he who has spoken comes and not the insulted one, then he shall be as he’s been called: no right to swear oaths, no right to bear witness . . .

If the insulted one comes and not he who has spoken, then he shall cry Nioingr! three times . . .

If the insulted one falls, the compensation is half a weregild; if he who has spoken falls, insults are the worst . . . .

Of course, rules vary, and sometimes an accused would have to fight, while in other situations, witnesses or champions for each side would take up the challenge.

In the 10th century, Otto the Great officially sanctioned the practice for the Holy Roman Empire, and in 1230, its legal code, the Sachsenspiegel, identified it as a key method for establishing innocence or guilt, particularly for claims of injury, theft or insult.

According to the Sachsenspiegel, the parties were provided with swords and shields and were prohibited from wearing helmets, shoes or heavy gloves. Although it’s not always clear what would happen to an accuser who didn’t show up at the appointed time (presumably in most cases the accused would be deemed innocent), if the accused failed to appear, that individual was deemed guilty.

In one noteworthy Flemish trial in the 12th century, Guy of Steenvoorde was found guilty of treachery after he was defeated by Iron Herman, in a particularly painful fashion:

The prostrate [Iron Herman] gathered strength . . . and slyly made Guy think he was certain of victory . . . . Meanwhile, having raised his hand very smoothly to the lower edges of the mail coat, where Guy was unprotected, and grabbed him by the testicles . . . and threw him from him, breaking open all the lower parts of his body . . . so that the prostate Guy grew weak and cried out that he was defeated and was going to die.

Wager of battle, as the practice was called in Britain, was probably introduced by the Normans, and the first recorded battle, Wulfstan v. Walter (1077), occurred soon after the Conquest (1066). (It’s not clear who won in this case.)

By the next century, the Tractatus of Glanvill (1187), an English legal treatise, suggested the practice was the primary mode of trial, at least among the nobles; however, by 1219 and perhaps to comply with the Magna Carta (1215), jury trials were becoming more common, and trial by combat began to slowly fall out of vogue in Britain.

That said, it was still around and in one 1251 case between the Abbot of Meaux and the Abbot of St. Mary’s of York, each holy man paid for a champion to represent him (like a lawyer, but with brawn instead of words). During the duel between the champions, despite the fact that Meaux paid much more for a generally considered superior fighter, as it began to look like his man could lose, the two clergymen quickly settled their dispute before the fight ended.

This particular trial by combat illustrates a couple important things about such trials in their practical use to determine guilt or innocence at this point in history.

First, contrary to what is generally depicted in film and TV shows, trial by combat was not always a lethal affair, and often combatants specifically used weapons like quarterstaves or the like which wouldn’t necessarily cause any permanent harm, though of course could potentially if a fight proceeded to the conclusion of one fighter being completely incapacitated. However, either fighter could at any point simply give up if things got a little too dangerous for their liking- sometimes accepting the drawbacks of losing was a preferable scenario to continuing to fight and potentially being killed.

Further, the combat sometimes didn’t even happen at all; once the two champions were set, if one side or the other was at a significant advantage, matters might be settled out of court as a result.  And even if the trial by combat went forward, the individuals involved in the dispute could in some cases decide to settle it before the fight ended depending on how the fight was going, as happened with the Abbots.

It’s also important to note here that it was presumed at the time that God would help the individual whose cause was just in the physical fight and ensure that person’s (or their champion’s) victory. Further, if one wanted to accuse someone of something in a court of law, as Justice John Bayley noted in the famous 1818 case Ashford v Thornton (in which Thornton requested trial by combat to prove his innocence), thanks to trial by combat, “the party who institutes [the trial] must be willing, if required, to stake his life in support of his accusation.”

Given all this, trial by combat, which could potentially be quite unjust, at the least from a practical standpoint often resulted in matters being settled without bogging down the court system.

In any event, by the 14th century or so, the practice had fallen out of favor with the Holy Roman Emperor, and this was noted in the Kleines Kaiserrecht, which prohibited trial by combat, arguing that too many people were falsely convicted just because they were weaker than their accusers.

While there is some dispute, the last official trial by combat in the British Isles (in which there was a combat) is generally considered to have occurred at Dublin Castle in Ireland between Teig and Conor on September 7, 1583, over a dispute for control of the O’Connor territory. During the combat, Conor was killed and Teig was injured, but emerged victorious.

However, other duels that were somewhat judicial in nature continued on, including one that occurred in Scotland in 1597, when Adam Bruntfield killed James Carmichael after, ironically, accusing him of murder.  Given Bruntfield had a license from the King to resolve the dispute in this way, some consider this to be the real last trial by combat in the British Isles.

Whatever the case, several unsuccessful attempts were made in this region to officially outlaw the practice of trial by combat in the 17th and 18th centuries. Things changed however, after the aforementioned Ashford v. Thornton case.

In a previous trial, Abraham Thornton was acquitted of rape and murder charges by a jury, despite public sentiment at the time being almost universally that he was guilty of both.  As to why the court of public opinion had already convicted him, Thornton was known to have left a party the night before with one Mary Ashford. During the party, contemporary media reports claim he bragged that he’d slept with her sister and was determined to do the same with Mary (though he denied he ever said this). Mary’s body was found the next morning at the bottom of a water filled pit and Thornton was shortly thereafter discovered with blood on his undergarments… On top of that, upon examination of her body, Mary’s vagina was found to have two lacerations.

Needless to say, things were looking dire for Thornton, who admitted to having supposedly consensual sex with Mary the night previous. So why did the jury acquit him?

Things started to turn in his favor when a medical examiner found no signs of struggle anywhere on Mary’s body, outside of potentially the lacerations in her vagina. As to those, he stated that in his medical opinion, they were simply caused by Mary having been very clearly (based on his examination) a virgin at the time Thornton and she had sex. As for the blood on Thornton’s undergarments, the examiner noted that Mary was menstruating at the time the couple coupled.

While this may have explained away the rape accusation (potentially, though of course not exactly conclusively), there still was the matter of the young and healthy Mary having been found dead at the bottom of a water filled pit not long after the pair had been seen together.

The key piece of evidence exonerating Thornton on this one was the timing of Mary’s death, which was partially determined thanks to an eyewitness seeing her walking alone shortly before she’d have walked by the pit. Given she was apparently alone and alive at around 4:30 am on the morning of May 27, 1817, it was determined to be impossible that Thornton had killed her. You see, around this time, and until her body was discovered about an hour and a half later, Thornton was a few miles from the pit in question, with his location for the duration corroborated by multiple eyewitness testimonies. Given this fact, to the extreme outrage of the general public, the jury (who initially were thought to be biased against him), were forced to deem him not-guilty.

What does any of this have to do with a trial by combat? Thanks to said outrage over the verdict, funds were raised and Mary’s brother, William Ashford, agreed to use them to appeal the murder charge. Thus, Thornton was subjected to yet another trial for one of the crimes he was just acquitted of.

Given that public outrage now made it even more difficult to find a jury who wasn’t convinced he was guilty before the second trial, and given William Ashford’s small stature compared to Thornton’s, Thornton’s counsel advised him to invoke trial by combat this time around.

And so it was that when Thornton was asked for his plea, he stated, “Not guilty; and I am ready to defend the same with my body.” He followed this up by quite literally throwing down a gauntlet at Ashford’s feet.

In something of a surprise, the court granted Thornton’s request for trial by combat, but his accuser, William Ashford, refused to take part; so Thornton went free.

In direct response to this case, in 1819, Parliament finally succeeded in outlawing this form of judicial dueling, as well as abolished the practice of private appeals like the one that saw Thornton tried twice for the same crime, despite being acquitted the first time. The act in question specifically noted:

…whereas appeals of murder, treason, felony, and other offences, and the manner of proceeding therein, have been found to be oppressive; and the trial by battle in any suit, is a mode of trial unfit to be used… it is expedient that the same should be wholly abolished…