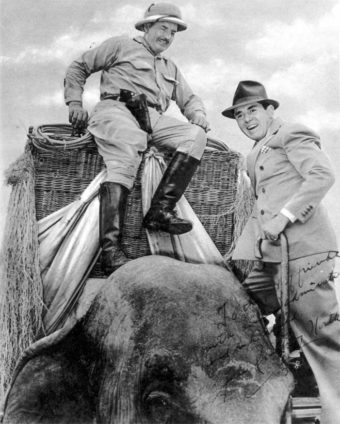 It was supposed to be a glorious and fun-filled summer day at the circus in Hartford, Connecticut. It was July 6th, 1944 and this was the final day that Ringling Bros. and Barnum & Bailey’s “Greatest Show On Earth” was in town. Over 7,000 spectators – most of whom were women and children due to it being a matinee, weekday performance – crowded underneath the big top to watch elephants, lions, a brass band, polar bears, daredevils and plenty of clowns prance and perform. It was about twenty-five minutes into the show when disaster struck, forever transforming the future of the circus. Here’s the story of one of the worst tragedies in American history, the so-called “Hartford Circus Fire.”

According to Stewart O’Nan’s book The Circus Fire, circuses have always had a history of horrific fires. In 1799, during Rickett’s Equestrian Circus, the Philadelphia amphitheater burned down – though no one was killed. P.T. Barnum’s shows endured countless fires, a few even with fatalities. The Ringling Brothers also endured fires during the 20th century, but none took lives. But perhaps the biggest warning sign was what happened two years prior to Hartford in Cleveland, Ohio in 1942. A fire burned down the menagerie tent (the one that held the animals) prior to a show, killing 100 animals including giraffes, lions, tigers, chimps, zebras and elephants. However, after each one of these fires, very few changes were enacted – likely because no spectators perished. As O’Nan points out, the fact that no paying customers died was mostly due to luck as opposed to any safety measures.

What separated Ringling Bros and Barnum & Bailey from other circuses was their squeaky-clean image. While competitors often had a reputation for attracting a certain crowd, Ringling Bros made sure theirs was for the family – there was to be no alcohol, no cussing and a show aimed at the kids. For this, Ringling Bros was always the most well-attended and biggest revenue generating circus of its era. They were also fantastic advertisers, constantly claiming that their circus was the best and biggest – including it’s “big top” tent, which they claim was the “biggest in the world.”

On July 5th, the circus sped into Hartford after a week of performing in other close-by cities like Providence, Manchester and Bridgeport. They were supposed to perform a matinee show that day but had to cancel due to being late into Hartford. The disappointment was front page news and likely led to larger attendance the next day at the July 6th show.

After rolling all of the wagons and animal cages off the train, they began preparing and constructing the “big top.”  Part of this preparation included waterproofing it with a mixture of paraffin and white gasoline, something that had been done for years by both Ringling Bros and other circuses. However, this mixture gave the big top a sort of waxy texture and made it extremely flammable.

At the same time, the city of Hartford sent police to the circus grounds not to inspect for safety but to search for runaways. There seem to be no records of Hartford Police nor Hartford Fire inspecting the circus for fire risk despite similar laws being in place for hotels, factories and other gathering spots. In addition, no such official stayed through the show and no one from the police or fire department was present when the fire started.

It was already ninety degrees and very humid when patrons started showing up hours before the 1 PM opening time. Due to the unexpected crush of people early, the circus skipped several normal routine measures like watering the grounds and removing obstructions from exits.

As the 2:15 PM showtime approached, more and more people – mostly women, children and the elderly due to the afternoon matinee performance and the majority of able-bodied men still in World War II service – slide under the top. Due to the heat and crowds, it was sweltering, even without a fire.

A few minutes after the 2:15 pm scheduled start time, the brass band struck up the “Star-Spangled Banner” and the circus began its show. So-called “runaway cages” were located at all the entrances in case an animal had an inclination to try to escape. These blocked a large portion of the exits.

The opening act actually involved no animals at all, but showgirls dressed in bright yellow military outfits “taming” others in lion costumes. Then, the real animals came out – lions, polar bears and Great Danes. As that performance was finishing up, the Great Wallendas – a family of daredevil and aerialists – started taking their positions thirty feet above the ground. They were the first ones to notice the spreading fire at about 2:40 PM.  Around that same time, bandleader Merle Evans instructed his band to immediately begin playing The Stars and Stripes Forever, with the song more or less functioning as an alarm bell for everyone working at the circus.

Directly after, ushers grabbed buckets of water that had been placed underneath the bleachers specifically for this situation. Some even tried to cut the fabric where the fire was to separate it from the rest of the tent. However, at this point the flames were out of control.

With the exits largely blocked and flames quickly engulfing the tent, the evacuation devolved into chaos. The abundance of children also caused delays and some even fell down, trampled to death by the masses trying to escape. Beyond this, melted wax began raining down from the tent roof above, burning those below and adding to the panic.

Within only a few moments, nearly the entire tent was engulfed and, with a big boom, the big top collapsed, trapping the masses still inside. Some later compared the tent to a giant, melting candle that reached the end of its wick.

Fire survivor Maureen Krekian, then 11, noted of her experience at the fire,

I remember somebody yelling and seeing a big ball of fire near the top of the tent. And this ball of fire just got bigger and bigger and bigger. By that time, everybody was panicking. The exit was blocked with the cages that the animals were brought in and out with. And there was a man taking kids and flinging them up and over that cage to get them out. I was sitting up in the bleachers and jumped down — I was three-quarters of the way up. You jump down and it was all straw underneath. There was a young man, a kid, and he had a pocketknife. And he slit the tent, took my arm and pulled me out.

The fire perhaps only lasted about 10 minutes. When it was over, more than 160 people had died – many of whom were children; the most famous of all was “Little Miss 1565,” a little girl who, despite her body being in very good condition when found, was never claimed by anyone nor ever identified, despite her face being plastered on newspapers and magazines nationwide after the fire.

The aforementioned author, Stewart O’Nan, in 2001 claimed he’d solved the mystery and that the little girl was Eleanor Emily Cook. However, Eleanor’s mother, Mildred, stated this was not the case after being shown a picture of Little Miss 1565. (Eleanor Cook did die in the fire, with O’Nan claiming that her mother had simply picked the wrong body among the many charred remains when identifying her little girl after the fire.)

In all, nearly 700 people either died or were seriously injured in the fire, making it one of the deadliest fires in the nation’s history and the worst circus disaster.

Despite the tragedy, images and stories of heroism emerged. Like, how parents swooped up children who weren’t theirs and took them to safety. Or how one of the minstrel performers rushed onto the stage to grab Frieda Pushnik the “Armless and Legless Wonder” who had no means to escape the tent on her own. The Great Wallendas saved hundreds by cutting holes in the tent and shoving cages aside. There’s a famous photo of “Weary Willy,” a clown played by Emmett Kelly, in dripping makeup and charred clothes rushing with a bucket of water. In fact, the fire was referenced in several newspapers as “The Day the Clowns Cried.”

To this day, no one knows for sure how the fire started. At first, it was blamed on a careless displaced cigarette. However, Ringling Bros pushed the theory that the fire was started on purpose. The investigation eventually led to Ohioan Robert Segee,  who had confessed to several similar crimes throughout the area and was in Hartford that day. While first reportedly confessing to the crimes, he soon recanted and doctors later determined he was not mentally fit to testify accurately.

In the early 1990s, fire forensic experts reopened the case and attempted to determine what actually happened. They concluded that the hypothesis of the “discarded cigarette” was unlikely, writing that “A carelessly discard cigarette thrown into the dry grass would not alone have started this fire, but other accidental ignition sources could not be eliminated…”  They also determined that there was no evidence of arson. The most logical conclusion the 1990s investigation yielded, nearly 50 years after the fire, was that a discarded match lit dry hay and, at first, started a small, contained fire that ultimately ignited the tent.

Whatever the cause, the Hartford Circus Fire had an enormous impact on circuses going forward. Beyond the near $5 million the Ringling Bros had to shell out to the families of victims, the regulations enacted in response on temporary and moveable structures – like tents used for circuses – were among the toughest in the nation. The tents now had to be treated to be fireproof, as opposed to waterproof. No longer would smoking be allowed inside cloth, temporary structures. Well-trained fire personnel had to be attendance at all times. Exits could no longer be blocked.

Hit with expenses from the new, very strict standards, Ringling Bros and Barnum & Bailey performed for the last time underneath their formerly iconic outdoor tent in 1956. From that point on, the circus continued in permanent buildings and arenas.

For more than seven decades after the Hartford Circus Fire, the show went on. But earlier this year, after 146 years in operation, it ended. At some point, everyone must take a final curtain bow.