There Was Once An Elephant Condemned to Execution by Hanging 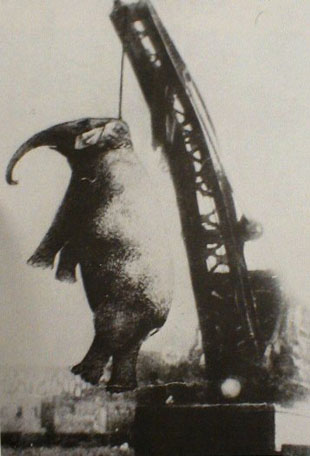 It is unknown whether this is a real or fake image of the hanging. It was submitted to Argosy Magazine shortly after the execution.

“Murderous” Mary was a 5 ton Asian Elephant in the Sparks World Famous Shows Circus. Her downfall began with the hiring of an assistant elephant trainer who had no experience working with elephants and possibly no professional experience even working with animals.  This worker was Red Eldridge, who before getting the gig generally was a drifter and most immediately before being hired as an assistant elephant trainer worked at the Riverside Hotel in St. Paul as a janitor.

Exactly how or why Mary killed Eldridge is somewhat up for debate as the story has progressively become more exaggerated over the years in the retellings.  But there was an eye witness account given shortly after the incident which is probably fairly accurate, at least it doesn’t seem sensationalized, as many of the accounts are.  The eye witness, W.H. Coleman, stated:

There was a big ditch at that time, run up through Center Street, …And they’d sent these boys to ride the elephants… There was, oh, I don’t know now, seven or eight elephants… and they went down to water them and on the way back each boy had a little stick-like, that was a spear or a hook in the end of it… And this big old elephant reach over to get her a watermelon rind, about half a watermelon somebody eat and just laid it down there… The boy give [her] a jerk (grabbed Mary by the ear with the bull hook). He pulled [her] away from ’em (the watermelon), and [s]he just blowed real big, and when [s]he did, [s]he took him right around the waist… and throwed him against the side of the drink stand and he just knocked the whole side out of it…. when he hit the ground the elephant just walked over and set [her] foot on his head… and blood and brains and stuff just squirted all over the street.

Needless to say, the last thing that probably went through Eldrige’s mind, besides Mary’s foot, was that maybe he should have asked for a little training before taking a job as a handler of a 5 ton animal.

The small crowd of onlookers didn’t take kindly to Mary murdering the man, and quickly formed a mob, which was nonetheless powerless to kill the elephant.  They even tried shooting her, with one man, Hench Cox, emptying his .32-20 gun into her with little effect.  The town Sheriff also emptied his .45 into her, but again, this didn’t really faze the poor elephant, though I’m sure she’d have much preferred not to be shot at.

Now the question was what to do with the elephant. The circus owner, Charlie Sparks, was loath to kill her as he and his wife, Addie, were animal lovers and particularly had a soft spot for Mary. She was his prize elephant- the first one he’d ever owned from back when his traveling show was a small time “horse and wagon” show.  In the 20 years since, she had helped make his circus into a major traveling show. Mary was billed as “The Largest Living Land Animal on Earth”.  She could play 25 different songs on the musical horns and could play baseball (both pitch and hit, supposedly hitting around .400 during her baseball performances over her lifetime).  More to the point, for Sparks, she was worth $20,000 (about $400,000 today), but it seemed likely that many a town would refuse to let his circus come if he had an elephant known to have killed a man in the performance.

As to the present town his traveling show was in, the townspeople called for the execution of poor Mary.  There were no elephant sanctuaries at that time, as there are today for such elephants, so Sparks conceded and decided to have the elephant put to death.

The problem was how to kill a five ton elephant without risking the lives of those trying to kill her.  Shooting was out as there was no gun in the region powerful enough to guarantee to kill the elephant quickly, thus somewhat humanely, and there was some concern that if they simply fired a bunch of guns owned by all the townspeople at her, that Mary might rampage, possibly killing more people.

Another suggestion was electrocution.  Thomas Edison famously executed the elephant Topsy this way (he also frequently executed dogs and cats to demonstrate the dangers of AC electricity during the “War of the Currents”, in an attempt to promote DC electricity).  The problem with this method supposedly was that there was no suitable site in the town where enough electricity would be available to run through the elephant.

They finally came up with the solution of hanging the elephant using an industrial crane meant for lifting rail cars.  On September 13, 1916, a few thousand people gathered to watch the execution.  Mary was led to and chained to the rail.  They then fitted a chain around her neck and began to hoist her up.  The problem was that they forgot to release the chain from her foot.  One eyewitness, Wade Ambrose, stated that he could hear the tendons and ligaments in her foot snapping as they lifted Mary.  Whether that’s true or not, eventually the chain around her neck broke and she fell to the ground, breaking her hip in the process.

Mary then lay there while they attached a thicker chain and this time remembered to remove the one on her foot after a new one was placed around her neck.  They then hoisted her back up and within a few minutes, Mary was dead, though they left her hanging for about a half hour just to be sure.  They dug a hole nearby and hoisted the elephant into it.  Her bones remain there to this day.