Who Is “Little Debbie”?

March 17, 2017 Matt Blitz
Michael C. asks: Was there ever a real Little Debbie or is she a fake mascot like so many other brand people? 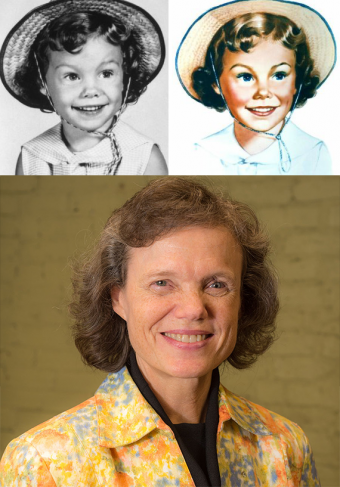 Images Courtesy of McKee Foods Corporation and Women of Distinction

Who is Little Debbie? The simple answer is that she’s the straw-hat-wearing, blue-eyed little girl on the front of the box of delicious confectioneries like Oatmeal Creme Pies, Honey Buns and whatever Star Crunches are. However, that’s not all she is. “Little Debbie” is also the Executive Vice President of McKee Foods, the eight-decade-old still family run company that makes all of these treats – plus Zebra Cakes and Cosmic Brownies. Her real name is actually Debbie McKee-Fowler and here’s how she became the face – and Executive Vice President – of the company that makes Swiss Rolls.

It was 1933 and the country was in the throes of the Great Depression. Nearly a quarter of the nation was unemployed and bread lines went blocks; in short, many were desperate, including O.D. and Ruth McKee who had lost most of their money due to a bank failure. What the couple did still have, however, was a 1928 Whippet car. According to McKee Foods’ official history, this was when O.D. started selling five-cent Virginia Dare Cakes made by Becker’s Bakery out of the back of said vehicle. By the next year, business was good enough that they were able to purchase a Chattanooga, Tennessee bakery, Jack’s Cookie Company.

In what was a unique arrangement for the time, Ruth became a full managing partner in the business with her husband. While O.D. traveled the state making sales and coming up with some innovative ways to produce new product, she baked, managed the office and took charge of the few employees they had. They were, as the company’s official history put it, “ideal business partners because her cautious, conservative nature was the perfect complement to his risk-taking, adventuresome spirit.”

Years later, Jack McKee would explain that his parents had “a unique opportunity during the Great Depression and they took a risk.” A few months later, the bet seemed to be paying off with the bakery moving to a larger location down the street.

But all wasn’t perfect. In 1934, they took on Ruth’s father, Symon King, as a partner. It’s not clear why they did this, perhaps they needed an infusion of capital or maybe they trusted King’s business instincts. Either way, it doesn’t appear to have been a match made in cake heaven. In 1936, over a business disagreement, the company split with the couple selling their share and moving to Charlotte, North Carolina to found a new bakery, while King took over the Tennessee shop, which he renamed King’s Bakery.

McKee’s official history leaves a giant gap between 1936 and 1952. However, it seems each bakery operated with moderate success, though with little known about them other than that it was during this period that O.D. invented what is today the company’s oldest continuously sold product- the oatmeal creme pie.

By the mid-20th century, O.D. and his wife decided to sell their bakery and reportedly mulled over retiring, but at the request of Ruth’s brother, Cecil, who at this point was running King’s Bakery, returned to help out managing it. Rather than run someone else’s company for them, not long after, O.D. and Ruth decided to buy the bakery back and rename it McKee Baking Company. The company quickly flourished under their management, which included the then innovative idea to sell their product in “family packs”- individually wrapped baked goods sold as a package deal.

Specifically, in the late 1950s, McKee Foods began producing “family packs” of 12 individually wrapped cakes in one unit. Thanks to essentially selling them in bulk to customers, it allowed the company to drop the price per unit slightly, while enjoying a significant boost in product sales at the same time. According to Jack McKee (one of the couple’s sons), most other snack companies didn’t begin packaging items this way for another decade or two.

This all brings us to how a straw hat clad smiling girl named Debbie ended up on the front of the boxes of mini treats.  There are slightly conflicting stories on how O.D. came up with the idea to use “Little Debbie,” but the general tale goes that a packaging salesman, Bob Mosher, told O.D. that the McKee name was boring and that he needed something better to juice sales. Casting about, O.D. supposedly noticed a picture of his granddaughter, Debbie (daughter of his son Ellsworth and daughter-in-law Sharon McKee), on his desk and a light bulb went off in his head. Still wanting to use a family name, O.D. decided on naming the company’s new line after Debbie and to use the picture on his desk of her in a straw hat as a logo.

Whether that’s exactly how he came up with the idea or not, we do know definitively that he had said picture in his office and that, after inspiration struck, he didn’t tell Debbie’s parents before going through with final printing. Not long after, famed pin-up artist Pearl Frush Mann used that picture off of O.D.’s desk to create a colored rendition of the little girl that still graces boxes to this day.

McKee Foods is still family-owned by second and third generation McKees. As for “Little Debbie,” Debbie McKee-Fowler, she’s now all grown up and is the current Executive Vice President of the company and runs the “Little Debbie” brand. While other snack cake companies may be struggling, McKee Foods keeps thriving. In 2015, they announced an over hundred million dollars investment in their Collegedale factory. In addition, they recently acquired Drake’s cakes – who make Devil Dogs and Yodels – for $27.5 million from bankrupt Hostess.